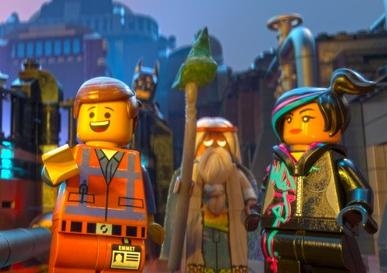 OPINION: Hollywood’s idea of family entertainment these days largely consists in a kind of reassuring condescension.

On the one hand, it must persuade us that its “means of production” — the truly staggering resources and technical expertise at its fingertips — are second to none in world history. No member of the family must be in doubt of these almighty powers of spectacle, which are also powers of investment and return.

On the other, it must be equally clear that the material on display, whilst technically overwhelming, is imaginatively and intellectually unthreatening. There is no comforting stupidity or cliché it will not knowingly indulge to flatter the rapt sensibilities of its customers.

From the execrable (Rio), through the witless (Ice Age), the inexcusable (Mars Needs Moms), the jejune (Madagascar), the fatuous (Planes), the hateful (Despicable Me), and the paltry (Cars), to the frankly embarrassing (Turbo) and utterly pointless (Yogi Bear), “family” pictures are too often the worst way to spend time with your children. The exceptions — the touching How to Train Your Dragon, and the deliriously wonderful Rango — just serve to prove the rule.

We are held by a sort of breathless paradox before these films: hypnotised by their power quite literally to do anything, to make anything visible and audible, we are over and again thrust headlong into the celluloid ceiling of the lowest common denominator.

Ever since Toy Story and the first wave of “new” Disney features from the mid-90s, this has cut two ways, of course. The kids are bamboozled with action sequences and slapstick, while the adults are pandered to with a verbal barrage of puns, references and design elements sure to sail leagues above the cultural competence of their tots (wink wink, nudge nudge).

But as time has passed, for both adults and children alike the latent tension between an increasingly sophisticated digital palette and an insufferable homogeneity of plots and character types has evolved into a powerful contradiction.

In a genre, and given a budget, with no logical limit to what can be presented on the screen, we all too often walk away from the cinema with nothing but the ashen taste of corporate cynicism in our mouths.

The trend has now reached its terminus ad quem in the recently released Lego Movie, whose hubristic production rationale was stated baldly by animation supervisor Chris McKay: “We took something you could claim is the most cynical cash grab in cinematic history, basically a 90 minute LEGO commercial, and turned it into a celebration of creativity, fun and invention.”

The test of any right-thinking person is whether they “buy” this outrageous doublethink and get on board with the fun, or stand aghast at its logic.

Due to the sheer audacity of its putative counter-cynicism, the narrative structure and style of the film come loaded with ironic significance, and (like a Freudian nightmare) begging for interpretation. And inversion is the key, for here is a family film that bucks the larger trend by looking “low-tech” and amateur, while its ostensible “critique” of corporate uniformity emits ideologically complex and progressive messages.

The story opens onto a world we are primed to read as an ambivalent utopia-dystopia. Everything is awesome! Except, of course, the fact that everything is exactly the same as it always was and will be.

How many times we have seen this before: The Truman Show, The Matrix (both of which the film draws on shamelessly), Groundhog Day… Hollywood “exposes” postmodern America as a society locked into patterns of rigid conformity and consumerism, knowing full well that it is one of the most powerful drivers of said repetitious vapidity.

Presiding over this brave new world is the evil mastermind Lord Business, aka President Business (subtle, huh?); while our non-heroic protagonist spends his days as a humble construction worker. Class antagonisms are thus put into play, after the events of Occupy and the claims of the 99%, as a dimension of the film’s “critique” of corporate cynicism.

And the Lego blocks themselves are raised from a mere given of décor into the central allegorical figure. If the entire world of the film is composed of bricks and pieces drawn from the Lego catalogue, then either they are to be used (once) according to the boxed instructions (Business), or they should be left to the free imaginative repurposing of every user.

So far, so Metropolis. And indeed, a gathering battle looms, between the reifying forces of Business (and his police lackey Bad Cop) and the liberators of free play, led by a team of “master builders” (intellectuals and “creatives”).

If the Utopia sought by the “master builders” has a shape, though, it is that of “Cloud Cuckoo Land,” a visionary world over the rainbow where anything goes and there are no rules.

As a term, “Cloud Cuckoo Land” belongs to the anti-utopian rhetoric of the reactionary mind; Aristophanes used the figure to mock dreams of a more perfect social order, and Adolf Hitler deployed it to brand his socialist opponents as idle dreamers.

The point of it is that it won’t work, and yet it is all that the political “master builders” of the rebellion have to offer: an untenable pastel paradise of grotesque cuteness and endless disco parties.

Our gormless hero, neither intellectual nor creative, has discovered the missing “Piece of Resistance”, and it turns out that his contribution to the struggle is, wait for it, his asinine conformity and willingness to play by the rules. The political waywardness of his talented comrades needs a dose of realism and modest pragmatism. The way into Business’s compound is through a tactical use of his own administered logic.

But here the meliorative political allegory disappears into its own navel and comes out the other side in a sickeningly manipulative Oedipal scenario where, finally, an accord can be reached.

Because what we took to be a struggle between business and creative working people is now revealed to have been only the fantastic projection of the true battle, between Father and Son, over the use of a sizeable Lego collection. It is by appealing to the Father’s inner Child (and it’s no mistake that Will Ferrell takes the part) that he learns to accede to his Son’s wishes to be allowed to play.

Even Metropolis handled its excruciatingly false reformist finale with better grace than the bathetic descent into crass sentimentality taken here.

And that is the name of the game. For 85 of the film’s 100 minutes, we surely knew that some insulting back-flip was approaching, and its arrival is a repudiation of every “political” gesture made to that point.

The “most cynical cash grab in cinema history” also culminates in the most cynical evisceration of its own political imagination that I can recall any film making, ever.

And that goes every bit as much for the style of the movie as well. The gleefully “low-tech” look and feel of the picture — as if it had been hand animated frame by frame using real bricks, the way Chris McKay crudely animates dolls for his Robot Chicken TV series — is of course an elaborate trick, painstakingly rendered on computers by the fantastic team at Animal Logic.

But the trick only serves to cement the point: the retro “dumbing-down” in style reassures the audience that the system (Hollywood) knows how to “be cool” and dial back its awesomeness when hypocritically telling us to play with our kids more. And more, it is showing us that it knows how to defer to another big corporate player.

It’s no coincidence that the deliberately stunted scenery was projected through the Lego Group’s own Lego Digital Designer, which “uses the official LEGO Brick Library and effectively simulates the connectivity of each of the bricks.” Real pieces were placed under digital microscopes to replicate actual seam-lines, scratches and ground-in dirt in the CGI textures.

Now hey, I’m no wet blanket. There are laughs and kicks here: Batman showing off the new subwoofers in his bat jet; the heave and swell of the LEGO ocean; a gag involving the Millennium Falcon. Fun enough, no doubt.

But let’s recap: Lego gave the rights to some clever fellows to make a movie out of their product, so that more of that product would sell. The movie, which looks like it is made entirely out of said product, shows that product seemingly at odds with itself (do we follow the instructions, or is it a free-for-all?), but it turns out that these options represent the dispositions of two different end-users, who resolve their differences by listening to the product’s inner voice, and return to it with a greater sense of satisfaction.

As a result, Lego sells more product, and makes a good deal of money out of its own advertisement. The filmmakers transform a 100-minute advertisement into, in their words, “a [hugely profitable] celebration of creativity, fun and invention”: lo, another franchise is born! And the audience is left holding the bag.

I was sick in it.

Julian Murphet is a professor of Modern Film and Literature and Director of the Centre for Modernism Studies, UNSW.