Opinion Tracing family with the Australian Red Cross – then and now

Australia's history of separations, reunions, refuge and war over the 20th Century are now being told through the incredible journeys of Red Cross tracing, write Ruth Balint and Jayne Persian. 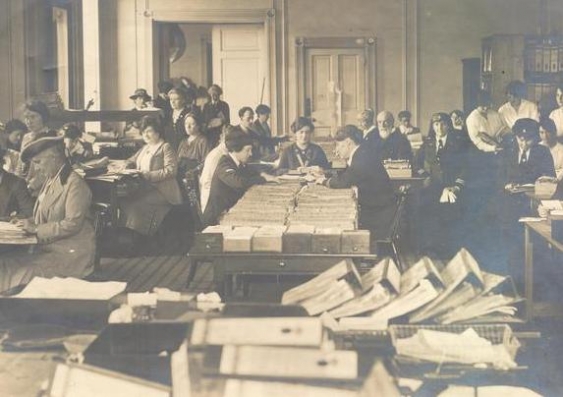 OPINION: Since 1915, the Australian Red Cross International Tracing Service has worked to reconnect families from around the world who have been separated by war, armed conflict, disaster and migration.

Some of those journeys to trace a loved one last a lifetime and are truly epic. Even today, a heavy part of the caseload for the Australian Red Cross, as for Red Cross tracing services in Europe and in the newer nation states of the old Soviet Union, relate to those who went missing in the second world war.

The history of Australian Red Cross tracing began on the battlefields of Gallipoli and the Western Front, with the creation of the Wounded and Missing Persons Enquiry Bureau in Sydney, which became the port of call for families around the nation searching for news of their sons, husbands, fathers and brothers.

The letters in these files vividly expose the horror and waste of war. Here’s a taste, from one letter in 1918:

Roberts was a big man, quiet, clean shaven, aged about 21 or 22. On March 28 we were at Sailly-Le-Sac advancing. When we had reached an objective and stopped, Roberts was wounded. I was 10 yards away at the time and saw him hit. He was sent back with Pte Tuke, who had also been wounded. Neither of them have since been seen, so far as I know. The Germans at the time were putting up a terrible barrage.

A month later the Bureau was able to report:

Our fears and anxieties for Ted are over. The search party found the Sgt and some of the missing buried in a shell hole; close by there was a tiny green mound with two sticks on it and two numbers. This was opened and Ted and his friend found buried together.

A railing will be put around and a Headstone erected with all the names on it by the 44th Battalion. The enemy behaved well in this case and gave them a decent burial, and it is a mercy that the dear boy did not linger on the battlefield wounded.

The second world war dramatically shifted the priorities of tracing, particularly in Australia, which after 1947 became host to the hundreds of thousands of refugees displaced by National Socialism and Soviet Communism.

The Cold War division of families dominated the caseload of Red Cross tracing in Australia right up until the 1970s. An infamous episode involved the kidnap of around 23,000 children during the Greek Civil War who were taken over the border to Soviet satellite countries.

Some of those children had fathers who had earlier migrated to Australia, and whose wives joined them; subsequently, parents begged the Red Cross to reunite them with their lost children. In 1950, 190 such children were traced in Yugoslavia and flown out to Australia.

At the same time, its work on the battlefield never stopped – the ubiquitous Red Cross Message was a precious lifeline for prisoners of war during the second world war, and continues today to reach individuals imprisoned for reasons of war and persecution, or who fear exposure.

Tracing families in the digital age

With the advent of the internet and social media, the technology of tracing has shifted again. Red Cross officers are dealing with some of the more protracted and difficult cases, and respond in time frames unthinkable 100 years ago.

Tracing the DNA remains of loved ones in mass graves in the former Yugoslavia, for example, or the fate of those lost at sea, is now part of the modern face of international tracing.

At the same time, case workers in Africa continue to find people “with their feet”, carrying books of names of the missing from village to village, solving some cases and adding others.

Nadine, separated from her family at the age of 13 during Burundi’s long and violent civil war (1993–2005), spent ten years alone in a refugee camp in Tanzania, followed by resettlement in Australia in 2004.

She never stopped searching for her family and upon arrival in Australia contacted the Australian Red Cross International Tracing Service. Contact was restored, and Nadine was able to call and speak to her family in Tanzania, and hear the sound of her mother’s voice for the first time in 13 years.

Four years later, after 17 years of separation, Nadine and her family were reunited. It’s one of many such stories, now a century in the making. You can find out more about Nadine’s story, here.

These family odysseys are part of an Australian history of separations, reunions, refuge and war over the 20th century now being told through the incredible journeys of Red Cross tracing.

Do you know anybody who has used the Australian Red Cross International Tracing Service to find family members? We are interested in talking to family members regarding any recollections/family stories they may have around the tracing service. Please contact Dr Jayne Persian if you are interested in sharing your family histories with us: jayne.persian@sydney.edu.au / 0404 880 141.