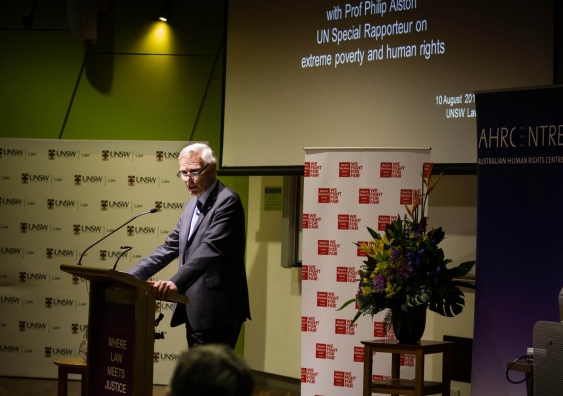 Professor Alston, John Norton Pomeroy Professor of Law at New York University School of Law, and co-Chair of the law school's Centre for Human Rights and Global Justice, discussed the connections between extreme poverty, extreme inequality and human rights in the lecture, "Why does it matter if others have more? How extreme inequality and poverty violate human rights".

He noted that little attention was paid to the interaction between these issues: economists and development specialists often excluded human rights from their programs on poverty and inequality and, more surprisingly, a lot of human rights groups thought they could not address the issue of inequality.

Before delivering the lecture, Professor Alston, who is the United Nations Special Rapporteur on extreme poverty and human rights, spoke to Guardian Australia about the Turnbull government’s approach to social protection policy.

As well as taking aim at its use of 'punitive language' when characterising welfare recipients, Professor Alston criticised the government’s prohibition on community legal centres using commonwealth funding to lobby for legislative change, saying it has reduced the space for civil society.