Some media commentators are blaming the bizarre make-up of the Senate on uninformed voters, but new research paints a more complex and reassuring picture of the undecided voter, writes Edwina Throsby. 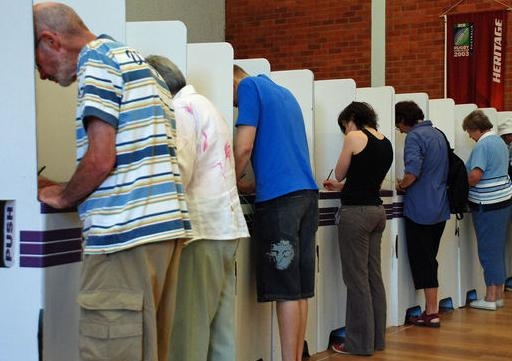 OPINION: In the weeks leading up to our recent national democratic jaunt, it was difficult to wade into the media soup without some campaigner talking about how it was all about the swinging voters.

Rather than refugees, it was ALP and Liberal Party researchers who were clogging the M4 in their daily rush westward, to conduct focus groups of the undecided citizens of Lindsay. Some commentators expressed the understandable concern that the people our politicians are most interested in reaching, are also those who are least interested in politics.

I am currently conducting a research project about swinging (or undecided, or persuadable, or soft) voters in Australia. The academic literature on the subject shows a clear correlation between those who have a low interest in politics, those who tend not to consume political media, and those who are more likely to be undecided in their vote.

Political campaigners I have interviewed agree that if you want to reach the undecideds you need to be talking to Kyle and Jackie O, not Tony Jones. And Australian Electoral Commission figures out this week indicate that more of us than in previous years handed in votes that, for whatever reason, could not be counted.

All this raises a big question: Are our governments really being decided by a bunch of mouth-breathing bogans who would rather be voting in Big Brother than in a federal election? Reading some of the media commentary, you'd be forgiven for thinking so. But the picture that is emerging from my research is more complex.

In the final weeks of the 2013 campaign, I ran a nationally representative poll of one and a half thousand Australian citizens. Fewer than half of us, it turns out, are rusted on to either side of politics. Twelve per cent expected that they would be voting for a different party than they did in 2010.

One in five were planning on waiting until the end of the campaign to make up their mind. Fourteen per cent were undecided because they didn't like either party. Only 10 per cent, the smallest group, said they just didn't follow politics. So of the 55 per cent of voters who were undecided, for many this was a result of at least some level of consideration, rather than a total lack of interest. We also have a remarkably high sense of civic responsibility. An overwhelming 90 per cent of us said that it was either "very important" or "a little bit important" for citizens to learn about politics.

This sense of responsibility is best expressed during election campaigns, which is something we can thank compulsory voting for. Elections mobilise people. Almost one-third of respondents said that they only talk about politics with friends or family when there is an election coming up. A senior journalist on a national broadsheet told me that his newspaper's circulation always swells during federal election campaigns. We've got to vote, so we may as well have some sort of a clue.

Don't get me wrong. I'm not pretending for a moment that there aren't plenty of Australians out there who are completely apolitical. Jacqui, a young woman in one of the focus groups of swinging voters I conducted in the week leading up to the election, was worried about voting this time. It was the first election since she'd moved interstate and away from her mum, who had always told her how to vote as they were going into the polling booth.

"Who did she vote for?" someone asked.

"To be honest I don't remember, I wouldn't be able to tell you, because it's been a few years now."

I'm sure there are lots like Jacqui who voted from a position of zero information last Saturday. In a democracy, this is unavoidable. But most of the undecideds in my groups, while not being particularly interested in politics, were still able to identify key election issues.

A group of swinging voter mums, for example, said they never had time to read the papers, and were getting the kids fed and to bed when the news was on so were never able to watch it. Yet, without any prompting, they spent the 90 minutes of the focus group segueing from the economy, immigration and education, to paid parental leave, same-sex marriage and hospitals. Even the NBN got a mention. Despite frequently apologising for their lack of knowledge, these women had picked up a basic comprehension of what the issues were, and how they thought their families would be affected.

Quite often, the undecided voters in my groups had their facts skewed, confused, or just wrong. But at the same time, many were able to articulate a set of opinions, desires and criticisms that they were applying to their decision of who to vote for, even if they were a little blurry about the detail.

Which begs the question, how much political information do you actually need to be able to vote? It's unrealistic to expect that every Australian has the same level of interest in politics as readers of The Drum. The 20th century economist Anthony Downs built an argument that becoming very highly politically informed is actually a waste of effort, because an effective vote can be made on relatively scant information. Political scientists have since observed that we form informational shortcuts, in which gut decisions are made from simple messages. Or that paying only passing, sporadic attention to political news or debate can still result in a citizen casting a vote that genuinely reflects his or her attitudes and ideologies.

So this week, while contemplating the bizarre cluster of randoms who will soon be sworn into our national Senate, don't despair about the collective intelligence of your fellow Australians. Our Senators elect are not there because the voters are idiots, but rather because our system of preferential voting is flawed. The voters themselves? Even the swingers might not all be so hopeless, after all.

Edwina Throsby is completing her PhD in political science at UNSW.

Senate voting needs reform below the line as well