Opinion Underlying sexism demeans all of us

Public conversations about politics have become uniquely personal and nasty since the election of our first female prime minister, argues Cheryl Kernot. 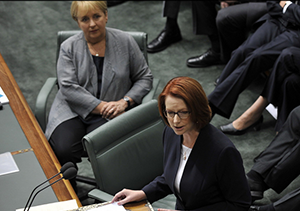 OPINION: It started with a speech to a supportive women's audience, moved on to that menu and ended with a radio presenter suspended for asking our Prime Minister on air whether her partner was gay because he was a male hairdresser.

With yet another episode of defence personnel engaging in the demeaning of women along the way!

The apology about the menu has been made and "we should all move on," we're told.

Yes, and we will, but not without reflecting yet again on the way the public conversations about politics have become uniquely personal and nasty since the election of our first female Prime Minister.

Of the many vile and demeaning terms used, "lying scrag" was the one that made my jaw drop most until this week's crassly offensive menu description. John Howard may have had the "little Johnny" tag and references to his eyebrows but never did he have to put up with lewd references to his genitals.

And for all those blokes out there having a sly laugh . . . and talking about how we can't make fun of politicians any more, try applying the words used to your wife or daughter. Our first female PM's time has coincided with the surge in the use of social media which fosters the use of anonymous personal abuse.

Labor strategists (all male) are said to believe that the gender issue plays to her advantage among women and have urged her to use it. So it's quite unsurprising that in the context of yet another leadership challenge and in a room of supportive women, she would make a speech about issues that resonate with women, just as Tony Abbott tailors his speeches to business audiences.

Unlike the "misogyny speech" of last October, this one was not broadcast live.

Instead, those journalists present chose what to report in the mischievous "gotcha" mode, something that happens a lot to those who are judged to be in a weakened position.

When I heard the selected sound bites my first thought was "why bring that (abortion) up now?" I have since read the whole (short) speech - something I bet most of those jumping in to comment had not when they reacted. It is a pretty unremarkable reminder of Labor's pioneering achievements in women's policy.

You can read it here: pm.gov.au/press-office/transcript-remarks-launch-women-gillard.

The abortion reference was a few words with Tony Abbott's past record of utterances and actions in mind. So it's useful to now have it on the record that any deal with a balance of power anti-abortion DLP senator is off the agenda.

The speechwriter should have anticipated that "men in blue ties" was obvious fodder for satire. Most men wear blue ties at some time but yes, Tony Abbott wears a light blue tie every day.

"Women's voices will be banished" was also an overreach. It is true, however, that they will be significantly reduced (by half) with just two women in an Abbott cabinet compared to the current four.

What I think would make a huge difference to policy and discourse would be men and women in equal numbers with equal voices at the table where the agenda is set.

Julia Gillard has made many errors of political judgment in my view, but I will not place her on a pedestal to get everything right for all women. That is how we set our female politicians up for a bigger fall. Hard though it is to acknowledge, the reality is that she is a politician first; one who also happens to be a woman. And like most politicians, she will need to do things to shore up her own numbers . . . just as male MPs do.

From day one of the last campaign, a small group of males in her own party has undermined her and their party. Just as Kevin Rudd has refused to accept his removal, she should refuse to step aside if she is tapped on the shoulder next week. Those Labor powerbroker blokes should not underestimate women's reaction to such a move.

So whether we like our first female PM or not, whether we trust her judgment or not, the fact is she seems to have exposed an underlying sexism that demeans us all. We need to grow up. Fast.

Cheryl Kernot is the Director of Social Business at the Centre for Social Impact, UNSW.

This opinion piece was first published in the Newcastle Herald.