UNSW Canberra graduate Lieutenant James ‘Jimmy’ Haw will head to Oxford University next year to study Anthropology after being named the 2016 Rhodes Scholar, Australia at Large. 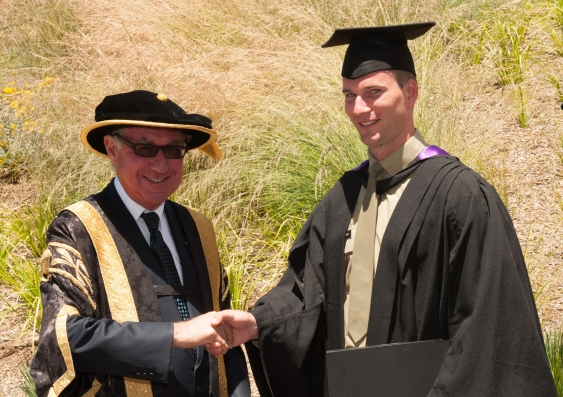 James Haw (right) with UNSW Chancellor David Gonski, at his graduation in 2013.

Lieutenant Haw is the seventh Rhodes Scholar from UNSW Canberra, and the second from UNSW this year.

In October, UNSW Law graduate Harj Narulla was also named a 2016 Rhodes scholar, becoming the fourth recipient from the Faculty in three years.

I want to focus on non-state and non-governed tribal groups and the way Western militaries deal with the complexities presented by these groups.

Lieutenant Haw is serving in the Australian Regular Army as a Cavalry Officer in the 2nd/14th Light Horse Regiment (Queensland Mounted Infantry). He intends to study a Master of Philosophy in Social Anthropology at Oxford with the aim of understanding the impact of military operations in the world’s tribal regions.

“I want to focus on non-state and non-governed tribal groups and the way Western militaries deal with the complexities presented by these groups,” he says.

Lieutenant Haw graduated second in his class at the Royal Military College – Duntroon, after graduating from UNSW Canberra with a BA (first class honours) and the university medal in politics in 2013. Prior to that he had earned the Chief of Army Prize for the most outstanding graduating Officer Cadet from the Australian Defence Force Academy.

Lieutenant Haw first became interested in Anthropology during his honours year, in which he focused his thesis on state resistance in Southeast Asia.

“My thesis supervisor Dr John Walker guided me through the path on how people from non-traditional Western societies view the world. He showed me the way to Anthropology and here I am.”

An avid observer of Southeast Asian politics and society, Haw has spent time at the Indonesian Army Military Academy and Indonesia’s Airlangga University on exchange. He says he found the military culture in Southeast Asia very different from Australia’s.

“Indonesia and Malaysia are the closest neighbours to our north and particularly with these countries we should have a strong strategic partnership,” he says.

“In particular the cadet exchange programs conducted by UNSW Canberra, ADFA and Duntroon are crucially important – they help to form friendships that will be beneficial in the future military relationships.”