Opinion Urban farming in Detroit: sowing seeds of hope in the motor city?

Will an urban farming project be able to revitalise Detroit, ask Laura Crommelin and Christine Steinmetz. 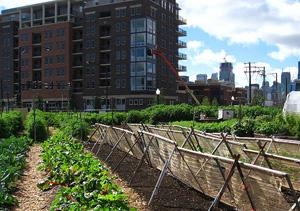 OPINION: “Every year I’d tell myself it’s going to get better… and, sure enough, it didn’t get better.”

Once held up as the epicentre of industrialised mass production, Detroit has for decades been portrayed as a failed economy beset with every kind of urban problem. However, recent years have seen a different narrative emerging, with some observers embracing the idea of Detroit as an “urban laboratory”, a city that provides opportunities to experiment with cutting-edge urban practices.

A key trend associated with this shift in narrative has been a growing enthusiasm for urban farming, which involves turning unoccupied city lots into small farms, usually through the efforts of the local community. The idea is not new – urban farms have popped up in cities around the world, with goals as diverse as ameliorating poverty, improving nutrition, empowering communities, and beautifying the city. Detroit itself hosted an innovative urban farming experiment back in the 1890s, when Mayor “Potato Patch” Pingree turned vacant city lots into farms to combat hunger and unemployment. Detroit’s city government is now once again taking urban farming seriously, developing an urban agriculture ordinance to govern what has previously been an unregulated practice. But perhaps what makes Detroit’s current urban farming movement most notable is its potential scale, given the many square miles of land in the city which is currently sitting vacant.

Yet while media portrayals of Detroit’s small-scale urban farming movement have been largely positive, a proposal which explicitly seeks to address this issue of scale is garnering a more mixed response.

John Hantz, a local resident and successful businessman, has been working since 2009 to develop the world’s largest urban farm in Detroit as a for-profit enterprise. Hantz wants to buy about 140 acres of city-owned land approximately six kilometres from the CBD, in order to plant thousands of hardwood trees. Hantz Farms claims they will improve the area by clearing overgrowth and rubbish and by demolishing abandoned houses which have fallen into disrepair – tasks which the city, facing possible bankruptcy, can little afford to do itself. Yet despite these contributions, persistent questions have been raised about whether the project is really about helping the community, beautifying the city, or simply generating personal wealth.

On a recent visit to Detroit, we sought an interview with Hantz to try to find out. Sitting in the high-rise Hantz Group offices, amidst bookcases filled with titles like “Good to Great” and “Think and Grow Rich”, it seems clear that Hantz is not closely aligned with the grassroots activists who have championed small-scale urban farming in Detroit. Yet when asked about his motivation, Hantz – who has spent his career in financial services and investment – seems bemused at the notion of the farm being about personal wealth creation. Significant returns on Hantz’s initial $5 million farm investment are unlikely to come in the short term, given Detroit’s ongoing population decline and weak property market, and the decades it may take to produce profitable harvests. And while Hantz Farms claims it will help to “grow the City’s population base and create an economic catalyst by stimulating new business opportunities and therefore, jobs”, the economic benefits of a large-scale urban farm like this remain untested.

At the same time, however, Hantz is driven both by personal benefit and by economics. He lives near the proposed farm site, and one of his key motivations is intensely personal. He puts it simply: “I don’t want to move.” But after 20 years of watching the abandonment of properties undermine nearby neighbourhoods, it was a mix of professional and personal philosophies that informed his response:

“Economics is my mainstay, that’s what I’m good at, economics and finance. So I’m trying to think what is the problem?…one day it hit me and I said well, the problem is we don’t have any scarcity…we have to take some of this excess capacity out of circulation to stabilise the markets to actually begin to start the recovery… So it’s like, well, I grew up [on the urban fringe]…I’ve lived on apple orchards…So why don’t we just do a farm?”

While Hantz may see the farm as a simple solution to an economic problem, others see more complications. One of the more common critiques is that this may be a “land grab” disguised as a beautification project. After all, Hantz’s proposal involves purchasing an area almost as large as Sydney’s Domain and Botanic Gardens combined, for a total cost of approximately $500,000. Hantz counters this criticism with another economic perspective, arguing that the government needs to cease seeing the empty lots it owns as assets, because “something that you…lose hundreds and hundreds of millions of dollars on is not an asset.” Instead, Hantz argues that increased private ownership should be encouraged across the board, not only for institutional buyers like him, because it underpins a successful city:

“Well, the problem is if you have 600,000 residents in a normal city, if there’s private property rights they cut their own grass, they provide this pride benefit that makes a city great … when you get this public ownership, it’s everybody’s and it’s nobody’s. So what happens is that everybody just sort of says that’s someone else’s problem…”

Listening to Hantz tell his story, it is clear that while his proposal intersects with cutting edge trends in urban planning, it is fundamentally traditional at heart. Hantz seems to be putting his faith – and his money – behind a belief that cities become great by facilitating individualism, entrepreneurialism and capitalism. It is in some ways a quintessentially American vision, and one that is particularly potent in the context of the nation’s current economic downturn.

It remains to be seen if this is a vision that can help Detroit to address its challenges, and it certainly runs counter to some of the more collective, collaborative approaches proposed in recent years. Hantz himself is fine with this mix of methods; in his view, Detroiters “have so many opportunities with the issues we face that we could try every idea.” having recently approved his proposal, it seems Hantz will now get to test the idea he hopes will be a “game changer” for Detroit".

Laura Crommelin and Christine Steinmetz are based in the Faculty of Built Environment, UNSW.