Australia must use what leverage it has with the US to urge a cogent, measured and co-ordinated response to Russia’s Syrian intervention, writes Alan Dupont. 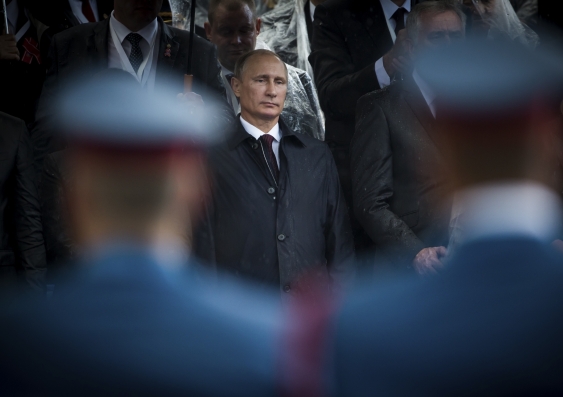 OPINION: Russia’s high-stakes military intervention in Syria risks a direct confrontation with the US, strengthens the beleaguered Assad regime and highlights the flaws of the Obama administration’s manifestly dysfunctional Syria policy. It also could endanger Australian aircrew should Russia extend its protective air umbrella into eastern Syria and Iraq.

This is a classical Putin play: a sudden but clearly calculated military manoeuvre accompanied by deception and information warfare, designed to wrest the tactical initiative from Bashar al-Assad’s opponents and enhance Russia’s previously peripheral influence in an important part of the Middle East.

Putin’s real target is not the destruction of Islamic State, as the Russian President would have us believe, but the standing of the US and its allies. If Russia’s naval cruise missile and air attacks in Syria are meant to degrade Islamic State, as Moscow claims, then why have 90 per cent been directed against Syrian opposition groups not associated with Islamic State?

It was their advances into Bashar al-Assad’s Alawite heartland in northwestern Syria that clearly precipitated the Russian deployments. And why would Russia deploy advanced, air-superiority fighter aircraft and sophisticated electronic jamming equipment other than to keep Coalition aircraft out of the airspace in Syria that Russia wants to control?

Putin’s immediate objective is to secure the naval base at Tartus on Syria’s Mediterranean coast and the air base at Latakia, Russia’s only military toeholds in the Middle East. This can be guaranteed only if Assad remains in power.

But Putin appears to be playing a more ambitious, long-term game. By contrasting his willingness and capacity to back his allies with Barack Obama’s policy vacillations and lack of resolve, he hopes to undermine the US position in the Middle East by casting Obama as a weak and indecisive leader. So far this is working.

Like all good chess players Putin thinks a step ahead. His next move may be an attempt to decouple Iraq from the US by offering a more muscular alternative to the insipid US support for the Haider al-Abadi government’s struggle against Islamic State insurgents.

In a sign of Iraq’s shifting geopolitical terrain, Abadi has pointedly welcomed Russia’s offer to provide operational intelligence for his hard-pressed troops. Iraqi Shia legislators are agitating for Russian military involvement against Islamic State, and Abadi has indicated he would be amenable to Russian airstrikes provided they are co-ordinated with the US. So it would be no great surprise to see Russian aircraft beginning to fly combat and intelligence missions in Iraq, as well as Syria.

This is where a messy situation could become even more complex and dangerous for Australian F-18 pilots and the crew of our early warning and control aircraft, which are central to the Coalition’s air operations in Iraq and Syria.

A hastily cobbled together understanding between Moscow and Washington, aimed at preventing accidents between their aircraft in increasingly crowded Syrian airspace, has barely survived a couple of close calls. As an additional safety measure, the Pentagon has prudently instructed US pilots to turn back if they come within 20 nautical miles of a Russian fighter aircraft to avoid accidental contact.

So far, the risk to Australian pilots, while rising, is still low because of the relatively small number of missions our F-18s are flying over Syrian airspace and the distance of Australian air patrols in eastern Syria from Hama and Idlib provinces in the west, where most of the Russian aircraft are currently operating. But this could change quickly if Russia extended its air combat missions into eastern Syria or the Abadi government asked Russia to fly missions in Iraq against Islamic State.

What would most concern Mark Binskin, the Chief of the Defence Force and a former F-18 pilot himself, are the advanced missiles carried by Russian fighter aircraft operating in Syria and the state-of-the-art Krasukha-4 electronic jamming system, which could blind our F-18s and early warning and control aircraft. If this mobile system is moved closer to the Australian area of operations in eastern Syria then Defence would have to reassess the risk to its pilots and aircraft.

Equally worrying is the recent penetration of neighbouring Turkey’s airspace by Russian aircraft, which brought a sharp warning from Turkey that its air force had orders to shoot down anything that intruded across the border and an equally curt rebuke from NATO that Russia’s intervention was inflaming an already dangerous situation. There also have been reports of Russian aircraft, flown by Syrian or Russian pilots, targeting intercepting Turkish fighters with their fire control radars, which is one hair-trigger step away from the launch of a missile.

Since Turkey is a NATO member, an incident involving Russian and Turkish fighter aircraft could trigger NATO intervention turning what should be a co-operative, international effort to defeat Islamic State into a perilous confrontation between Russia and NATO, with unforeseeable regional and even global consequences. NATO Secretary-General Jens Stoltenberg already has flagged the possibility of deploying elements of the alliance’s 13,000-strong rapid deployment force to defend Turkey’s borders should this prove necessary.

However, Russia’s untimely, unhelpful and self-interested intervention in Syria may yet prove Putin’s undoing and, paradoxically, present an opportunity for the US and the Coalition to reset their policies on Syria and Iraq.

Putin has played a weak hand skilfully, but he is now committed on two fronts: Ukraine and Syria. The more he becomes involved militarily in Syria and potentially Iraq, the greater the risk that Russia will be sucked into the vortex of Middle East politics and the costs to Russia in blood and treasure will rise. There are already signs that Russian advisers will operate on the ground with Assad’s army. And the growing number of Russian ground forces in Syria suggests a more ambitious role than defence of the Latakia and Tartus bases. A further indicator would be the appearance of so-called Russian “volunteers”, mimicking the strategy of plausible denial used by Russia in Ukraine, which Moscow foreshadowed on Monday.

However, the Syrian opposition has shown no sign of being intimidated by the Russian airstrikes and inevitably will strike back. Even with the backing of the elite Iranian Quds force and Hezbollah there are no guarantees that Russia’s military intervention will be decisive for the Assad regime. It could merely prolong the agony of its final demise.

And there will be a price to pay at home. The weak Russian economy is poorly placed to support two expensive military commitments in Ukraine and Syria for an extended period.

Australia must use what leverage it has with the US to urge a cogent, measured and co-ordinated Coalition response to Russia’s Syrian intervention, starting with the forthcoming Australia-US Ministerial talks on defence and foreign policy in the US on Monday. The principal aim should be to raise the cost, for Moscow, of actions that are inimical to the Coalition’s common security interests in Syria and the wider Middle East. The response should incorporate three linked strategies.

First, Obama must expose Putin’s demonstrably false claim that Russia’s intervention is all about targeting Islamic State. He should be warned that if his military continues to target the US- supported Syrian resistance groups, the US will provide them with the means to defend themselves, including man-portable air defence systems. Washington has been reluctant to do this in the past because of understandable fears that they could fall inadvertently into the hands of Islamic State and other anti-Western forces. But the risk could be minimised by tightly controlling the release.

Second, Obama needs to do more in Iraq and Syria by taking decisive military action to degrade Islamic State capabilities and counter the widespread perception that he lacks Putin’s will. This means ramping up the half-hearted and largely ineffective US support to Syrian moderates and deploying US advisers with Iraqi and Kurdish forces.

Obama also should make clear to Putin that if Russia continues to run its own race in Syria at the expense of the West, then the sanctions imposed on Russia over its earlier Ukrainian incursion will not only remain in force — they will be tightened and expanded.

A failure to respond robustly to Putin’s game-changing play in Syria will erode the US and Western position in the Middle East, do little to reduce the insidious threat of Islamic State and confirm the US is no longer willing to make the necessary sacrifices to support order in the Middle East.

Cybersphere is the globe’s new battlefront