Opinion What bits of sexual threats against women do courts and men not get? 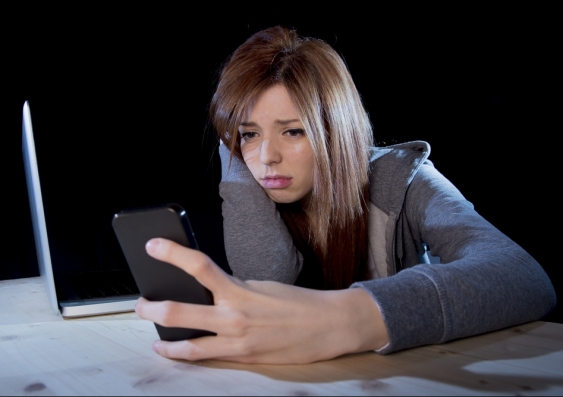 This article contains graphic language of a violent sexual nature.

OPINION: The photo from outside court shows a young man wearing a suit and dark sunglasses. He smirks as he raises a defiant middle finger at the cameras.

In this photo, Zane Alchin does not look remorseful. He does not look like a victim. Yet this is what we are supposed to accept in the aftermath of a court case in which the 25-year-old Sydney labourer pleaded guilty to bombarding young women on Facebook with graphic, sexually violent messages.

This was a case that had the potential to help set international benchmarks in terms of holding men accountable for harassing and abusing women online. Instead, it has become another instance in which the powers-that-be contribute to the widespread victim-blaming and perpetrator-exculpating in relation to cyber violence against women and girls. 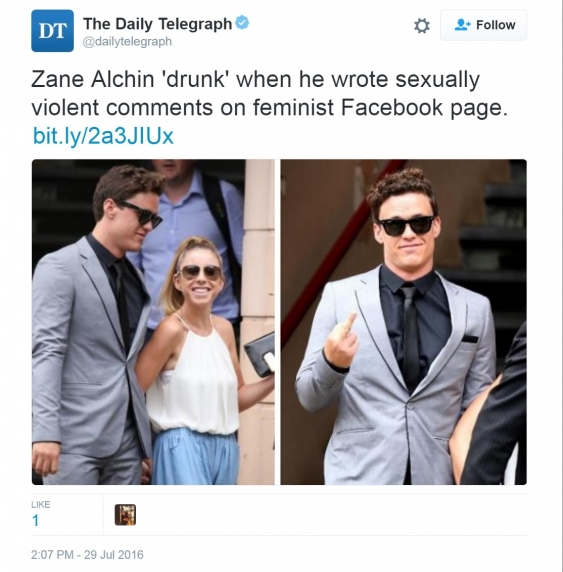 What was the case about?

Alchin was arrested in October last year after participating in the mob “slut shaming” of a young Sydney woman, Olivia Melville, who had included a risque hip-hop lyric in her Tinder profile.

You know the best thing about a feminist they don’t get any action so when you rape them it feels 100 times tighter.

[Y]ou've proven the only thing good a women’s mouth is useful for is to get face fucked til she turns blue then have a man hot load shot straight down it.

Sure as hell I wouldn’t let these cunts taste their own shit off my dick.

You'll be eating my cock till you puke.

Many of these posts were aimed at Paloma Brierley Newton, a friend of Melville whose reporting of the incident to police led to Alchin’s arrest.

Earlier this year, Alchin pleaded guilty to using a carriage service to menace, harass or cause offence. This is a federal crime that carries a maximum penalty of three years’ imprisonment.

During the sentencing on July 29, a Sydney court heard Alchin had consumed half a bottle of bourbon when he had made the comments, and had woken the next morning feeling immediately remorseful.

His lawyer, Sophie Walsh, said her client had become “the poster boy for the most vile trolling” and:

… a far greater victim to the crime that he was pleading guilty to.

Magistrate William Pierce seemed to agree. Sentencing Alchin to a 12-month good-behaviour bond, he likened the case to a game of football in which everyone had consented to “a few bumps”, but in which Alchin “overdid it”.

Accepting the young man had not actually intended to rape anyone, Pierce held that his Facebook posts did not constitute rape threats. Further, he said the flak Alchin had experienced in the aftermath of the incident meant he had experienced “a great deal of pain” that he did not deserve.

While Pierce’s decision to impose a non-custodial sentence seems appropriate, many of his in-court comments are extremely regrettable.

Pierce’s focus on whether Alchin actually intended to rape anyone is also misplaced. There is good reason to believe the normalisation of “Rapeglish” online is both a symptom of and a contributing factor to the far-broader problem of gendered violence offline.

The main purpose of posts like Alchin’s, however, is to shut women up and shut them down. The intention is to cause distress and remind women that many men view them as second-class citizens, whose raisons d’être are to serve as kitchen-dwelling, sandwich-making semen receptacles (the popular term online is “cumdumpsters”).

As such, whether Alchin actually intended to rape Newton was the wrong question to be asking in the context of this particular court case.

Pierce’s comments about the women involved were also lamentable. He made a point of noting, for instance, that Melville’s Tinder bio contained an “inflammatory comment of a sexual nature”.

Well, yes. Melville’s Tinder profile was sexual in nature because so is Tinder. Anyone who uses the platform to detail their deep desire for a lengthy, sexually abstinent and marriage-bound courtship would be massively misreading the genre.

Then there was Pierce’s comment about Newton being guilty of a “vast over-reaction”. But Newton did not over-react. The internet over-reacted. Unfortunately, that’s just what the internet does.

In what parallel universe could this be construed as an over-reaction?

Just as Alchin has become the poster boy for the masses of other online antagonists who attack women over the internet, Pierce can be seen as the face of the large number of institutions and organisations that don’t seem to “get” that misogyny online is a real problem causing material harm.

While there is no shortage of feminist analysis and commentary about structural sexism, unconscious bias and male privilege, one of the best explainers about this particular example of man-myopia comes from the talk-show host John Oliver.

If you think misogyny online is not that big a problem, his message to you is:

Congratulations on your white penis … because if you have one of those, you probably have a very different experience on the internet.

Dr Emma Jane is a Senior Lecturer in Media, Journalism and Communication at UNSW.