Opinion When is a lie not a lie in politics?

Politicians wishing to run down their opponents in the eyes of the public are quick to level accusations of dishonesty. But these 'lies' aren't always what they seem, writes Mark Rolfe. 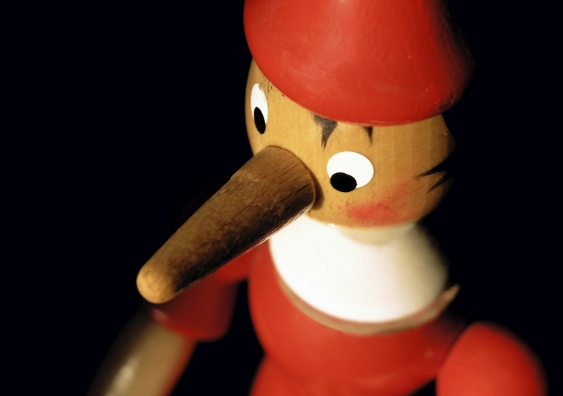 OPINION: Everyone has heard of the expression "Lies, damn lies, and statistics". It usually crops up in discussions of politics and warns us to be suspicious of numbers which may be inserted into arguments, particularly during election campaigns.

The ABC has a fact-checking unit for sorting out this problem and achieving some semblance of balance.

But consider another, more rhetorical aspect about lies which muddies the picture for us. Politicians are often accusing each other of lying.

On Saturday night on ABC News 24, Liberal minister Gladys Berejiklian fumed that Labor ran a dishonest scare campaign throughout the New South Wales election. The Coalition banged that drum for many weeks, seeking to discredit the ALP and its union allies who maligned privatisation in all its manifestations, not only of sections of the electricity network but also of the health system.

So outraged was the Coalition that it set up a website Stop Labor Lies and made aFacebook post where people can apparently learn "the truth" and the "facts" of the matter according to the Coalition.

Partisan accusations that opponents are lying occur often in politics because they can advantage any politician wishing to run down opponents in the eyes of the public. Tony Abbott put it best in 2004 when he said:

Of course, more than any other occupation, politicians have a strong vested interest in running each other down.

And it works because we are prepared to believe the worst of politicians - that they are liars, deceivers, and only in the game for themselves. The history behind this belief is some 300 years old and can be traced to England. This does not mean we've had generations of corrupt politicians. Far from it, I believe, leaving aside the exposures of ICAC. In fact, across political history, I believe there are far fewer corrupt people in politics than in the rest of society. We just like to think the politicians are worse than our good selves.

For partisans, the rhetorical purposes of such accusations over the centuries are, firstly, to raise the emotions, the outrage of voters; and, secondly, to make the choice between political parties that much clearer by making them appear starkly different. This is despite the large areas of agreement between parties that have always been a feature of politics since the nineteenth century.

In 2010 and 2013, Abbott's vested interest was in deposing Gillard and Rudd as prime ministers. Equally, Rudd was interested in 2007 in depicting John Howard as a "clever politician", which had all the negative associations of deceitful politician attached to it. This fed on the earlier descriptions of the Howard government "mean and tricky" on a number of issues, a view exacerbated by the revelations after the Iraq war that there were no weapons of mass destruction and the various pieces of evidence to justify the war were false.

One of several techniques achieved by politicians is to broaden the notion of a lie and then repeat the theme. Abbott helped to destroy Gillard's prime ministership by claiming her institution of a carbon tax was a lie instead of a promise made before the election which was broken after the election in negotiations to set up a minority government. Conventionally, we think of a lie as involving a statement made while having knowledge that would falsify that statement. Gillard could not have known before the election how events would pan out in order for her statement to qualify as a lie.

What also attends the drive to make choices starker and more emotional is the belief that it is always the other side that tells lies while one's own side is pure.

To return to the NSW elections, the Liberals insisted that the NSW Nurses & Midwives Association lied in their assertion that government policies will lead to an Americanised health system.

Again this involved a broadening of the concept of lying. The association is projecting in its ads an outcome in the future of a two-tier system along American lines. It doesn't lie but it does include horrendous current American costs of various procedures with the implication that this burden might await us in the future. In other words, the association is also indulging in the rhetoric that ramps up our emotions and makes the choice starker.

But our health minister was also selective when she declared public patients would continue to pay no charges because she was avoiding the thrust of the association's fear of a two-tier system and privatisation resulting in Americanisation.

Furthermore, as Fact Check has shown, the Coalition fudges things in its claim that Labor delivered just half a railway line during its time in office. For all the honesty proclaimed by Berejiklian, the Coalition sought change to a report on privatisation andresorted to "creative accounting", according to a respected accounting academic.

The Baird Government denounced the scare campaign of Labor and the unions. But Abbott succeeded brilliantly before 2013 with a scare campaign about debt weighing down the country's future, as he continues to do in government. Before him, in 2007, Rudd and the unions scared voters about the consequences of WorkChoices, with justification in the minds of those scared of losing their jobs or conditions. Mind you, many Laborites denounce the scare campaign against asylum seekers.

It all depends on where you sit on the political spectrum.

Honour thy parents, lead thy nation: Turnbull and Shorten play to the family feeling