Opinion Why are our livestock still turning up in places where they are treated cruelly?

It is rapidly becoming clear that nobody is capable of remaining in charge of the welfare of Australian animals once they arrive in the chaos of the developing world, writes Siobhan O'Sullivan. 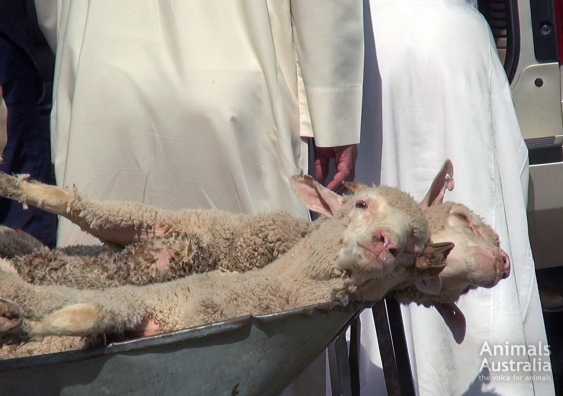 OPINION: Recent days have seen yet more revelations of irregularities in the live export of Australian animals, and a fresh round of protest against the trade. Last week, the ABC’s 7.30 reported that many animals shipped to the Middle East are individually sold for private slaughter, rather than going through the Australian-approved abattoir system.

This system, called the Exporter Supply Chain Assurance System or ESCAS, was a Gillard Government initiative introduced in the wake of the ABC’s 2011 exposé of the treatment of Australian cattle in Indonesia, which prompted a temporary suspension of the trade to Indonesia.

ESCAS was part of a peace deal brokered between an outraged community and the live export industry. Before then, the industry was largely self-regulated. ESCAS might best be described as “enforced self-regulation” – but, as we will see, the enforcement aspect is problematic.

When Australian animals are found outside ESCAS it is referred to as “leakage”. The theory is that these animals can be tracked, via their ear tags, to their original exporter, who can then have their licence revoked or suffer some other sanction without the need to suspend the entire trade.

As Greens Senator Lee Rhiannon has observed, the system sounds good in theory. But she has also pointed out the impossibility of policing the movement of millions of animals in other countries.

And as I have previously argued on The Conversation, Australia’s government appears not to be even trying.

According to the most recent available figures, the agriculture department has received 90 complaints of leakage incidents since 2012. Of these, 34 were from exporters themselves; 30 came from Animals Australia; 12 were from industry peak bodies; seven from “external third parties; three were from "the public”, two from the RSPCA; one from a media report; and one from the department itself.

In short, everybody else with an interest in live export seems to know more than the government about what’s happening to Australian animals in Asia and the Middle East.

What’s more, after three years and 90 reported incidents, no export licence has ever been suspended or revoked.

This lack of action now seems to be generating resentment within the industry, as well as outside it.

For the first two years of ESCAS, the bulk of complaints came from Animals Australia. But in mid-2014 that began to change. For reasons that are unclear, exporters began self-reporting their own breaches. Then, this year, industry peak bodies took up the running – in the past five months, 12 of the 31 complaints have been made by industry groups against individual exporters.

It seems that some exporters and industry representatives are increasingly feeling that those trying hardest to comply with ESCAS are suffering an unfair market disadvantage relative to those who are non-compliant. In the absence of government attempts to enforce its own rules, it falls to the exporters themselves to try and maintain a level playing field.

Alison Penfold, chief executive of the Australian Livestock Exporters’ Council, told the ABC: “We have people on the ground, not only in our supply chains but also outside of our supply chains, looking for problems. And they found problems and we reported the problems.”

It would appear, then, that enforcement of ESCAS has now veered back towards industry self-regulation.

The future of live export

Perhaps the industry’s new strategy aims to ensure the trade’s survival in the face of accusations of poor animal welfare, by outing those outfits with the worst animal welfare records. This could result in further monopolisation of an already small sector. But the real risk, from a regulatory perspective, is that ESCAS may become even more vulnerable to industry capture. If the government continues to perceive itself as having no role to play in enforcement then industry will once again be in a position to call all the shots.

More broadly, it is rapidly becoming clear that nobody is capable of remaining in charge of Australian animals once they arrive in the chaos of the developing world. What is euphemistically referred to as “leakage” is more like a burst water main.

There seems to be no problem finding animals outside ESCAS, and there is no shortage of horrific stories of animal suffering.

Meanwhile the battle of wills continues, with industry apparently engaging a new strategy. At the same time, the Australian public appears no less distressed by the images of cruelty seemingly so easily captured, and the Australian government continues to appear to be at best reactive, and at worst entirely absent.

Siobhan O'Sullivan is a Lecturer in Social Policy at UNSW.