Opinion Why Rudd will rue his pragmatism

As Rudd's popular support has dived over the past month, he's demonstrated he doesn't understand the importance of ideology in a democracy, writes Lindy Edwards. 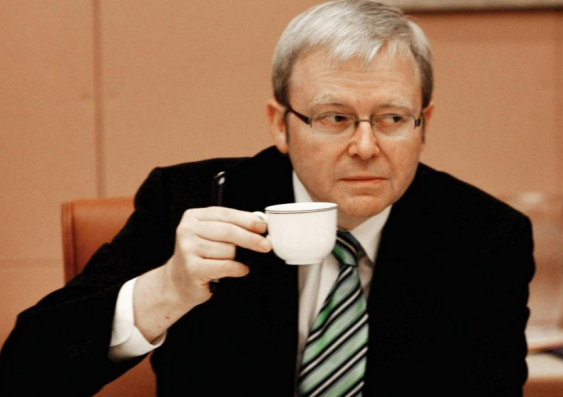 OPINION: Ideology, aka conviction, is not always the enemy in the contest for hearts and minds.

As Rudd's popular support has swan dived over the past month, he has demonstrated that he does not understand what went wrong with the Gillard prime ministership, or the importance of ideology in a democracy.

There will be some in the Labor camp who will point to the campaign in the Murdoch press, poor campaigning technique or the party's baggage as reasons for the collapse in Rudd's support. In reality those things have just exposed and reinforced the weakness that has run throughout this government.

The collapse of this Labor government should (but won't necessarily) mark a clear winner in the debate between the pragmatist camp and the ideology camp within the ALP.

Those in the pragmatist camp will tell you that politics is about the art of compromise. It is about finding ways forward that competing forces can agree on. It involves deal making to find the best possible accommodation of everyone's interests. They will argue that political messaging is just the veneer that lies over the top of that process.

Pragmatists tend to assume that people will make their decisions and judge the success or failure of their political masters on the practical circumstances they deliver. They assume that ordinary people do not hold very coherent world views, and that people don't care deeply about issues of principle or the big stories about the trajectory of the nation.

Those in the ideology camp (or the conviction camp, if you prefer) take a different view. They argue that the big picture story about the challenges Australia faces, and the vision of the future, are essential to political success. In this view, ideas perform a vital role in a democracy. In our political system, we have no choice but to vote for our representatives and then leave them to manage the detail of our collective affairs behind closed doors.

To take this leap of trust, people want to be reassured of two things. First, we want to know that, in decision-making, leaders will try to do the right thing by the country, whatever they judge that to be. Second, we want to know what their world view is so that we can predict what their decisions are likely to be. Having a clear and principled world view is an essential ingredient for winning people's trust.

To the ideologist, leadership is about pushing in a clear direction. Stakeholders still need to be managed, and not everything is possible if the balance of interests don't line up. But the vision is the guiding light, and voters can get on with their lives knowing that is what you are pushing for outside the media spotlight.

This Labor government (and it has been consistent through Rudd I, Gillard and Rudd II) has provided a political scientist's dream experiment to assess the two positions. It has been a quintessential case study in pragmatism. The government has presided over a period of wealth and stability as the rest of the world has collapsed into recession. In practical terms, things have been pretty good in Australia for much of this government's term.

However, Labor has repeatedly had its leaders adopt contrary and inconsistent positions depending on the polling on a particular issue. Over and over, leaders have made announcements that have been breathtakingly unexpected, often because they have been completely at odds with an earlier position. The impact on leadership credibility and trustworthiness has been devastating.

Gillard will go down in history as a very effective pragmatist but as having failed on trust and coherence. She delivered on an enormous amount of reform as a first term prime minister, but the transparent messaging, the tendency to directly contradict prior statements and to argue that black was white, created a deep unease.

Similarly, Rudd's slide began when he backflipped on the carbon tax and on asylum seekers, ditching long held ethical positions to clear the decks for an election. He dashed the electorate's hopes that he was focused on substance rather than strategy. Even if they agreed with the particular policies, they began to see him as a chameleon who would say anything to win.

The last couple of weeks have reinforced people's fears about Rudd. The Northern Territory tax haven, the Very Fast Train and moving the Garden Island military base all smacked of "whatever it takes" politics. Rudd has highlighted his flaws more powerfully than Murdoch could ever have done.

Ideology as a word evokes a negative response. That is because we think of ourselves as having a vision and values, while people we disagree with have ideology. But whatever you choose to call it, as Labor plumbs the depths, it is clear we don't like our politics without it.