Opinion Why should we care about lives lost at sea?

A state funeral will be held for asylum seekers who drowned off the Italian coast last week. What can Australians learn from the way Europe responds to such boat tragedies, asks Claudia Tazreiter. 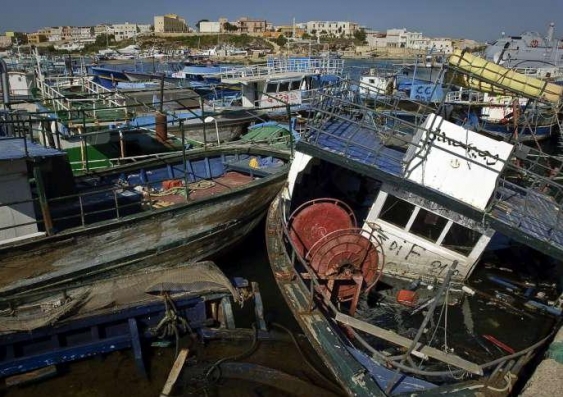 OPINION: Sydney has just witnessed a spectacle of Naval power and ceremonial pomp with the Review of the Fleet, marking 100 years of Australia’s Navy. For an island nation such as Australia, the Navy holds a special significance, protecting a country surrounded by a vast, expansive sea.

Over the weekend news also emerged of a boat tragedy off the southern Italian coast near Lampedusa where up to 200 people lost their lives in an attempt to reach Europe's shores from North Africa.

The Italian Prime Minister, Enrico Letta and the European Commission president, Jose Manuel Barrosa have visited Lampedusa to pay their respects to the dead.

At this visit the Italian Prime Minister announced a state funeral for those who have drowned. Such an act of public respect is difficult to imagine in the Australian context.

Why is the Lampedusa tragedy important for Australians? Why should we care about lives lost at sea? And are there any lessons to be learned from how Europe responds to such boat tragedies?

Deaths at sea are not new to Australians. Hundreds of men, women and children have drowned in the waters between Indonesia and Northern Australia.

A number of coronial inquests have highlighted the shortcomings in both detection and rescue efforts.

Since the Siev X incident in 2001, which claimed 353 lives, the death of asylum seekers at sea attempting to reach Australian shores has become all too common. It is estimated over 1,100 people have lost their lives in asylum vessels off Northern Australia since 2001.

About two weeks ago news emerged of the latest boat tragedy in the waters between Indonesia and Northern Australia.

It is believed 52 people drowned, mostly women and children. They had fled from the conflict and instability in Northern Lebanon that has spilled over from Syria.

Remember, the countries in the region, including, Egypt, Iraq, Jordan, Lebanon and Turkey are hosting more than two million Syrian refugees.

There is a startling contrast in the rhetoric coming from European and world leaders responding to the Lampedusa boat tragedy compared to the rhetoric from Australian leaders on asylum seeker boat deaths. Australians know all too well the language and emotive descriptors of asylum seekers arriving by boat: illegals, queue jumpers, 'scum of the earth' (in association with people smugglers), potentially nasty criminals, in short, people who are intent on disrupting the Australian way of life by not waiting for an invitation to enter.

Perhaps unsurprisingly, the Coalition’s election campaign slogan 'stop the boats' has quickly been replaced by a more cautious approach to the complex terrain of governing, including the reality of engaging in more careful diplomacy with Indonesia than the cavalier approach of buying Indonesian vessels – a policy trotted out during the election campaign and quickly abandoned.

In Europe, Pope Francis has called the sinking of the boat in Lampedusa and the resulting loss of life a disgrace, saying, "Let us unite our effort so that similar tragedies do not happen again".

He called for a "day of tears".

The Italian Prime Minister called the accident "an enormous tragedy". Lampedusa's mayor, Giusi Nocolini said, "These are refugees. We have a duty to take them in. They must be respected".

Perhaps most striking have been the comments by the Interior Minister, Cecile Kyenge, who called for Europe to take action on the problem, stating that "we cannot underestimate this situation. We are witnessing a human tragedy [that affects] all the countries of Europe".

Certainly Europe is no nirvana for asylum seekers and other irregular migrants. But why are the reactions to the human tragedies of lives lost at sea attempting to find refuge so shockingly divergent in the European and Australian case?

It can't be that Australians are hard-hearted, unaffected by the suffering of others, obsessed with Kafkan rules of entry that no refugee can comply with (make sure you have valid papers or you're not here).

We might be reminded that Europe has a long and painful history of creating refugee crises and failing to protect people from the excesses of violence and annihilation. In a recent article on the history of the French city of Marseille, Neal Ascherson writes of the scores of refugees who came to Marseille in the early 1940s, "penniless and exhausted, often with the wrong papers or none".

The story for some of these individuals ended well, with journeys facilitated through smugglers and illicit routes to London or New York. For many others the journeys ended in death.

The conundrum of the refugee's dilemma remains as stark as it did during World War II. It is beautifully captured by a extract from W.H. Auden's poem, Refugee Blues.

The consul banged the table and said,

"If you've got no passport you're officially dead":

Prime Minister Abbott's negotiations at the APEC summit in Bali can have no more important agenda item than leading the debate in mapping out a more humane approach to irregular migration in the region.

Surely the strength of the global economy is understood as pegged to stability, peace and thriving communities.

Dr Claudia Tazreiter is a Senior Lecturer in Sociology at UNSW.