Again and again Wicked Campers has flouted rulings against the intimidatory and misogynistic slogans on its vans for hire. We need a judgement with bite, writes Helen Pringle. 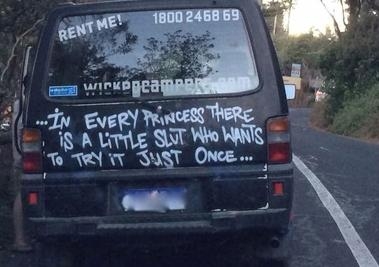 OPINION: The hire company Wicked Campers is again in the news. An online petition addressed to the company's founder John Webb has been initiated, with the aim to "eliminate misogynistic and degrading slogans and imagery".

Paula Orbea (AKA, in mediaspeak, "a Sydney mother") began the petition after her young daughter saw a Wicked campervan with the slogan "In every princess there's a little slut who wants to try it just once...". Orbea's daughter "felt, as a girl, that the slogan was referring to her", which it is precisely what the slogan is doing, and how it is meant to be read.

Wicked Campers is a serial offender at the Advertising Standards Bureau (ASB), which has formally considered dozens of complaints against the company since 2008. What is most striking over that time is that the ASB has completely failed to counter the campaign of derision and intimidation against Australian girls and women by the company. In fact, in the last two years, Wicked Campers has simply not responded in any way to complaints lodged with the ASB, or to determinations against its conduct by the Bureau. And the Bureau is powerless in the face of the company's contempt for it.

Some examples of the slogans and pictures cited in complaints to the ASB about Wicked Campers include:
• "Random Breast Testing Unit", with cartoonish representations of breasts (ASB Case 234/08);
• "Men would notice women's brains more if they jiggled when they walked" (ASB Case 238/08);
• "Lick my c*nt" (In Japanese script) (ASB Case 350/08);
• "Women are like banks - once you withdraw you loose [sic] interest" (ASB Case 220/08).

In the last of these cases, the ASB upheld the complaint, finding that the display of this slogan was "misogynistic and demeaning to women" , contravening §2.1 of the Australian Association of National Advertisers Code, that is, "Advertising or Marketing Communications shall not portray people or depict material in a way which discriminates against or vilifies a person or section of the community on account of race, ethnicity, nationality, sex, age, sexual preference, religion, disability or political belief."

The response of Wicked Campers to the initial complaint in this 2008 case was characteristic: it asserted that the slogans on its vans were simply funny or light-hearted sayings, not advertising, and added that any interpretation of them as discrimination was in the mind of the complainant.

When the ASB determination on the complaint was communicated to the company, it responded:

Wicked Campers disagrees with the board's findings that the slogan is misogynistic, demeaning to, and objectifies women. However given that the umpire has now made her decision, it would be unsporting of us not to comply and modify the vehicle in question. The slogan will be removed as soon as we can determine what vehicle it is on and be replaced with something dull, boring and suitable for anyone offended by the word 'bottom'.

One of the most egregious violations by the company did not even become the subject of a complaint to the ASB. During the 2012 Queensland state election campaign, a company campervan was painted with a garish cartoon of a naked middle-aged woman, with her legs spread wide apart so as to expose her whole body to the world, and her genitals obscured by two squares, marked as 1 (her vagina) and 2 (her anus). The caption to the cartoon shouted out to its audience, "Tick the Right Box!". The cartoon represented Anna Bligh, then Queensland premier, who had earlier criticised the company's use of a racist slogan on a van ("Save a Whale - Harpoon a Jap!").

John Webb's usual method of addressing concerns about Wicked Campers is to portray complainants as prudish and as lacking a sense of humour. Similar responses are also often used against those who voice concerns about any kind of pornographic treatment of women, whether in entertainment, advertising or political discourse: that is, that pornography is all just one big joke - and that women, in particular, need to lighten up. The self-styled humourist Ben Pobjie, for example, wrote in the left-wing magazine The King's Tribune in 2012:

There are many reasons a person might be weird enough to not like pornography. For example, that person may be suffering from nervous hysteria and just need a good finger massage or fire-hose-induced orgasm to set things right.

Pornographic visual material is increasingly used not only as an aid to sexual arousal, but as a weapon in patterns of intimidating, hostile and abusive behaviour towards women. The ASB's responses to complaints against Wicked Campers have only rarely acknowledged that the company's conduct is discriminatory, instead portraying it for the most part as offensive or inappropriate. The company's latest slogan calls out to a girl to consider herself as a slut. And it calls out to men that she really "wants to try it", that she really wants to be humiliated. This is more than offensive.

Wicked Campers now simply fails to respond to ASB complaints or determinations even on this watered-down characterisation of the company's conduct as offensive. Perhaps it is time to take the company's contempt as an opportunity to rethink what to do about Wicked Campers. What would a different approach look like?

If the roads and highways on which the Wicked camper vans are driven were a workplace, women would have a clear claim that the display of the vans and their slogans constitute harassment as discrimination. Moving violations, we might call them. Displaying sexual cartoons and pictures, or calling women obscene names and epithets in workplaces, is a form of legally actionable sexual harassment. That is, such conduct can count as a form of gendered power that creates and sustains a hostile environment that puts women in their (proper) place, the place of inferiority. Especially if unchecked, such conduct is also a sign, to both men and women, that women are not assured of equality of treatment.

It is widely supposed that such forms of discriminatory intimidation cannot be called out by legal remedies when performed outside of the workplace. This is only partly true. The Anti-Discrimination Act in Queensland, in which Wicked Campers is based, simply sets out that a person must not sexually harass another person. The Act goes on (§119) to elucidate the meaning of sexual harassment in the way in which the term is used in other anti-discrimination acts in Australia and elsewhere. It is time to think about formulating complaints against Wicked Campers within this framework of harassment as discrimination.

In his book The Harm in Hate Speech, Jeremy Waldron argues that a flourishing and fair society rests on the equal standing and treatment of its members - and on the recognition and assurance of that equality in society's "signage". The Wicked camper vans assign girls and women to a place of inferiority and frustrate the assurance of equality to which we are entitled, in public places just as in workplaces.

On its website, the ASB states that it's the administrator of "a national system of advertising self-regulation", which "recognises that advertisers share a common interest in promoting consumer confidence in and respect for general standards of advertising". When a written complaint is upheld by the ASB, "the advertiser is requested to remove or amend the offending advertisement as soon as possible after receiving a copy of the draft case report".

In 2013, eight formal complaints against Wicked Campers were made to the ASB. One was dismissed (the offer of a free day of camper van hire if you pick it up naked or send in a photo of yourself naked in front of a Wicked Campers van), and the other seven were upheld. In 2014, so far, 10 complaints have been made against the company, with one dismissed ("To all virgins - thanks for nothing!") and nine upheld. In all of the cases considered by the ASB over these two years, the company has made no response to the original complaint or to the ASB determination.

It's time to use a different framework, one with bite.

Dr Helen Pringle is a senior lecturer in the Faculty of Arts and Social Sciences at UNSW. 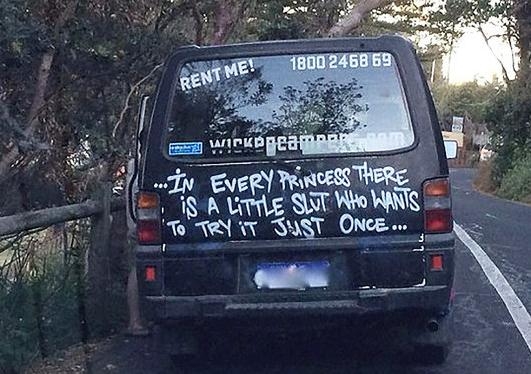