These are ferociously intelligent books by two young female writers addressing the problems of gender, race and migration in Australia today. 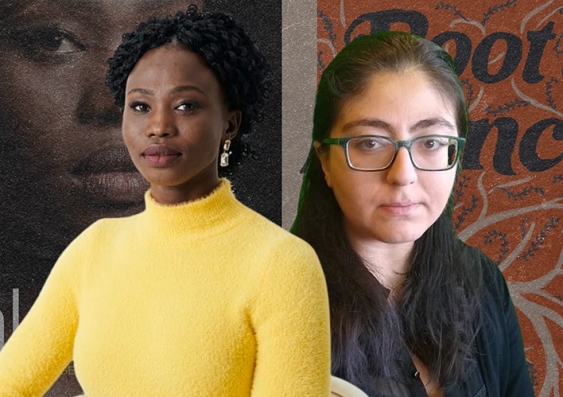 Akuch Kuol Anyieth was born into a world of violence. Her memoir begins at the age of five, when she fled with her mother and her three siblings from civil war in South Sudan to a refugee camp in north-west Kenya.

The Kakuma refugee camp became her home for the next nine years. It was a place where everything necessary for physical and mental survival was in short supply: food, water, shelter, law and order, safety, security and hope. 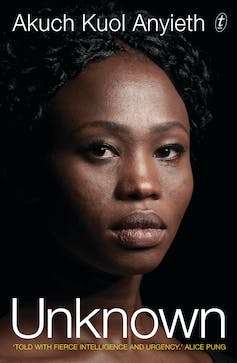 Unknown is a powerful book about growing up South Sudanese in the late 20th century. It is also a book of advocacy, written with the insights and understanding gathered from Anyieth’s scholarship and activism in family and domestic violence in the Black refugee community.

It breaks the silence around the African-Australian experience, which has long enabled systemic discrimination and racism towards South Sudanese refugees in Australia.

The stress of the refugee experience

In Kakuma, Anyieth’s family faced a fierce struggle to survive. Each morning, she and her younger brother Gai would walk to one of only three taps in the camp to collect water for their family. The taps were only turned on twice a day, for one hour.

It was almost impossible for every family in the group to get their allocation of water within those two hours, and there were often fights at the tap and at the aid distribution centres.

The daily allowance for each family was 14 litres a day, four litres below the minimum international standard.

Food rations were equally meagre. Although the minimum daily ration for survival is stipulated by the World Health Organisation as 2100 calories per person, in Kakuma the daily food basket distribution was about 1300 calories. Anyieth’s brother Gai was soon admitted to hospital with malnutrition bordering on starvation.

Kakuma’s inhabitants were forced to live in tents, or huts if they were lucky. They had to endure terrible heat, massive floods, and swirling dust storms that regularly tore down their flimsy shelters. Diseases, alcoholism and violence were rampant within the camp. Fighting was frequent. Men beat their wives in public. Teachers beat children at school. Fights broke out between families and tribes.

“Most of the fights,” Anyieth writes,

were the result of the intense stress of the refugee experience: extreme weather conditions, illness, starvation, grief and lack of closure for family members lost during the war, and the constant trauma of witnessing strangers and loved ones being killed.

When the Kenyan government sent in the local Turkana police to calm violent conflicts in the camp, these “peacekeepers” waged a separate war of sexual abuse against refugee women and girls: “The number of rape cases rose so high that it became difficult to keep track of them.”

Although there were no official avenues in the camp for diagnosing trauma or mental illness, the signs were everywhere. To the young Anyieth,

it was obvious that the people around us were stressed, traumatised and full of anger – at the South Sudanese government for persisting with the war, at the UN for failing to supply adequate aid, at the Turkana people for resisting refugees being settlers on their land, and at the harsh living conditions of the camp. Even those refugees who claimed they were okay could not hide the signs and symptoms of stress in their eyes and bodies.

Anyieth’s family also descended into a nightmare of domestic abuse, inflicted by her older brother, Dragon. He began fighting as a way of earning respect and dispensing justice, but spiralled out of control once alcohol became involved.

Dragon quickly became infamous throughout Kakuma, often getting into trouble with the police, but the violence inflicted on his own family was relentless. He would often beat up his sisters, sometimes when he was drunk, or sometimes when he felt they had done something wrong. Occasionally, he would turn on his mother:

The stress Dragon had brought upon our family, especially Mama, was immeasurable, and her body bore the marks of it.

Despite the almost unendurable conditions, Anyieth held on to her childhood dream of an education. She rarely had the opportunity, spending hours each day collecting water, firewood or food, doing household chores, and trying to protect her siblings from her brother’s murderous rage.

But in late 2004, she miraculously excelled at her grade six exams, almost unheard of for girls, winning a full scholarship to attend the Angelina Jolie Girls’ Primary School.

The school was hardly a model of humanitarianism. Ringed with barbed wire, ostensibly to protect the girls inside, it in fact served as a prison. Girls like Anyieth were forced to endure yet more violence. Students bullied each other and teachers freely used the whip. On one occasion, Anyieth’s teacher made her lie on the floor, lifted her dress and lashed her with the “Uncle Black” (a rubber whip made from a car tyre) more times than Anyieth could count, soaking her in blood.

In 2002, Anyieth’s family began the process of applying for a humanitarian visa to come to Australia with help from their uncle, who was living in Perth. In mid-2004, the family was interviewed by UN workers. The interviews were followed, a few weeks later, with medical and physical checks.

After nine years enduring “the worst climate on earth”, they were finally granted their visas, and Anyieth was released from the daily hell of Angelina Jolie’s School for Girls.

She describes arriving in “paradise”. Everything was new and miraculous, from traffic lights to the sweet taste of apples and Coca Cola, to swimming pools filled with water “just for leisure”, to the absence of disabled and maimed people on the streets.

But the violence that had punctuated their lives in Kakuma continued in Melbourne. Dragon punched through walls in their uncle’s home, using Anyieth’s head at one point. He fractured his uncle’s arm.

They had to stay awake every night to protect themselves from his violent outbursts. Eventually, one night he beat their mother so badly that Anyeith called the police. Dragon was taken away, charged with assault, and ordered to stay away from the family.

He took to living in parks. His mother would find him and bring him home, where he would stay until the next violent outburst, and the cycle would continue.

We were like every other person abused at home by a loved one: covering for the abuser, hating it, but knowing that if we said something our loved one might get into trouble. 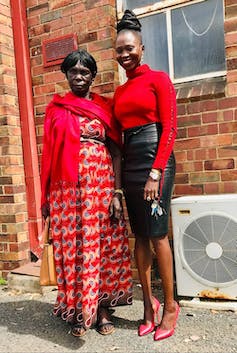 Akuch and her mother, Mary, in Melbourne. Author provided

Anyieth’s body bore the marks of his violence: bruised arms, black eyes, busted lips. Sleep deprivation ate away at her ability to focus in her language classes. And yet she and her mother never gave up on Dragon.

It is the relentless violence of the state that is most shocking and confronting for Anyieth, and for the African refugee community to which she belongs. The “paradise” of affluence and clean streets masked a different kind of ugliness, no less extreme for its effects on refugee lives than the visible poverty and daily degradations of Kakuma.

Anyieth and her family arrived in Melbourne at a time when refugees from Africa were receiving significant media attention. Politicians and media personalities (I am thinking here of Andrew Bolt and Neil Mitchell) helped spark a moral panic about people of African heritage, in particular South Sudanese youth. They labelled them as criminal thugs and “animals” and linked them to gang violence.

All of these acts, small and large, were enacted in the alien language of English. The first-hand experience of powerlessness drove Anyieth to master English and she was soon in demand as an interpreter for the South Sudanese community.

She became an official interpreter, working for the police, the courts, Child Protection, hospitals and prisons, mainly in domestic violence disputes. In all of these institutions, a lack of cultural and historical understanding perpetuated the problems of systemic injustice.

Violence in her community, Anyieth writes,

goes deeper and beyond the gender inequality that is so readily used to explain family violence in the West. For us, it is rooted in traumatic experiences, racism, discrimination, marginalisation and social injustices.

The mental health issues and PTSD that refugee families have dealt with from years of war, followed by their marginalisation and isolation in Australia, are still overlooked, perhaps even silenced. Anyieth’s insights are part of a groundswell of voices from the South Sudanese community speaking out about the reality of mental health issues and violence in their communities, including the shocking number of youth suicides.

Eda Gunaydin is another young woman concerned with the issue of inter-generational trauma in migrant families. Her new collection of essays, Root and Branch, confronts the complexities of what it means to be a young Turkish woman in Western Sydney – and the trauma one inherits as a child of parents who are wounded by their histories. 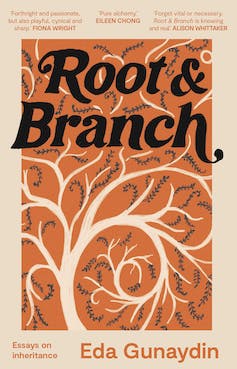 She is equally concerned with the problem of speaking and not speaking English, often including the Turkish phrases of her parents, which she deliberately does not translate. The effect on non-Turkish speakers is one of alienation, not unlike the way English often alienates migrants and refugees. The refusal to translate is provocative and political.

My favourite essay, “Western Medicine”, describes the Blacktown of Gunyadin’s family home, officially designated an “LGA [local governent area] of concern” during the recent COVID outbreak. Gunaydin considers the area as both a material reality and as a mental fixture symbolising the danger, poverty and violence of marginalised non-White Australia.

Gunaydin belongs to a particular cohort of writers emerging from Western Sydney, who position themselves outside and against Australia’s hegemonic “Anglo” culture. She writes:

I am loathe to think of it as a place with a fixed geography. It’s not as sexy to say, but it would be more appropriate to call it a constellation of meanings stitched together and imputed on an ever-warping set of geographies, with Western Sydney emerging as whatever the centre discards as its periphery.

The essay is littered with comparisons to her new life in the inner west, with its better hospitals, better roads, better schools and better food. 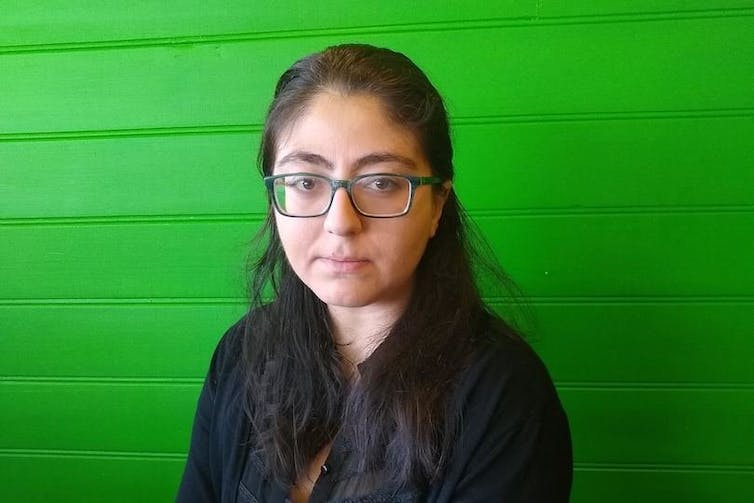 Gunaydin is unflinching in her depiction of her family’s dysfunction. She won the Sydney Morning Herald Young Writer of the Year Award for an essay on this topic and, in the essay “Literacy”, she describes her family celebrating the prize by going out to a restaurant in Rouse Hill, the “more bourgeois” part of Western Sydney. They go there in her father’s ute, the journey descending into a ritual of humiliation and unhappiness, like most of her interactions with her mother. Her father and sister remain silent, self-protecting observers.

All of this is related with Gunaydin’s unflinching honesty. Her talent lies in her ability to weave together the personal and the political, to map her story of trauma and alienation against a broader history of marginalisation and poverty that began in Turkey and continues in Western Sydney.

Each essay, some more than others, also grapples with the work of gender, queer and literary theorists. But the real strength of these essays, to my mind, is when the writing is freed of these anchors.

Root and Branch and Unknown are ferociously intelligent books by two young writers addressing the problems of gender, race and migration in Australia today. Both represent a new generation of writers engaging with the trauma of their and their parents’ pasts.

The authors share a position of not quite belonging in a country that is still not reconciled to its history of violence and dispossession. They yearn for something better. Both books stare a certain kind of Australia in the face and demand to be heard.