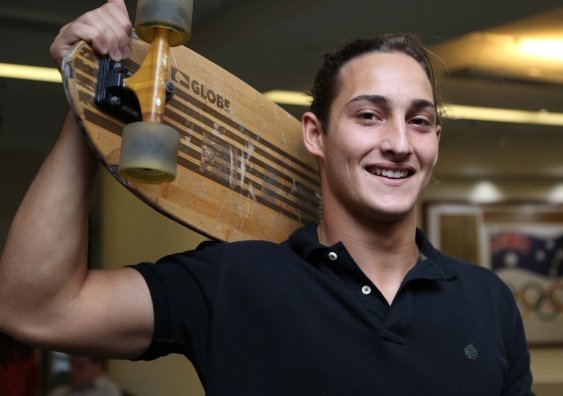 Afonso Firmo hopes his startup company can make a major splash in the Australian fitness industry by turning smartphones into “digital personal trainers”.

A phone app the company has developed is being touted as a lower-cost option for gym goers than wearables, but will feature a lot of the same functionality.

Firmo, who hails from Portugal, is in the second-year of an environmental engineering degree at UNSW and, since arriving on campus, has used the Michael Crouch Innovation Centre (MCIC) as a homebase to nurture and inspire his entrepreneurial aspirations.

In 2016, Firmo co-founded Mova Motion with Aleph Retamal and Ewaldo Moritz Neto, a mechanical engineering student who was on exchange at UNSW from the Federal University of Santa Catarina in Brazil.

The three co-founders were all passionate about athletics and fitness, and by extension, injury recovery. They wanted to harness the sensors inside smartphones to develop an application that could track exercise movements, and provide users with real-time feedback about their performance.

Initially, the goal was to target the physiotherapy industry, says Firmo. The intended users were going to be patients recovering from reconstructive knee surgery: the app would help them execute their movements correctly and gamify stretching routines, all while sending data back to the physiotherapist, who would have a leg-up in managing compliance.

The goal is to help gym-goers achieve their fitness results faster with fewer injuries.

Firmo and his team developed a working prototype at the MCIC last year, and in September they won the Johnson & Johnson health-tech HaTCHathon, a “fast-paced innovation race” where entrepreneurs and developers tackle challenging healthcare-related problems.

The MCIC recognised the potential of the Mova team, and offered to provide access to the MCIC’s “in-Residence” co-working space. Working shoulder to shoulder with, and being mentored by, other startup founders fueled Mova’s confidence, pitch skills and ambitions.

Brad Furber, the COO of MCIC, says the Mova team is a case study of how the MCIC provides a platform for students to turn great ideas into real products and services.

“We like to say that ‘everyone is welcome to find a better way’, but for those with high potential, the MCIC provides enhanced mentorship, resources and access rights,” said Furber.

Within just a few months of moving into the MCIC co-working space, the Mova team applied for and was accepted into the HCF Catalyst Program, an intensive 12-week accelerator for startups that can improve the healthcare industry.

Not only has the team gained access to industry mentorship, business support and an expanded network, their acceptance into the program came with a A$50,000 investment round and what felt like “validation” from the wider Sydney startup community.

“Getting into HCF helped us realise that we were on the right track and that our idea had value,” says Firmo.

He and his team are 10 weeks into the program, which wraps up in mid-May with a pitch to investors. With the guidance of their mentors, they have already made a critical decision to abandon the physiotherapy pathway. Instead, they’re focusing on the fitness industry.

Firmo says the decision was motivated by two key factors: the founders’ knowledge about and passion for fitness, and the speed with which they could deploy and test a product, and get effective user-feedback and validation.

“Physio was going to take a lot longer, requiring more consultation with health professionals, insurance companies, and possibly even some medical research down the track,” says Firmo. “It wasn’t something we were ready to commit to at this stage.”

Mova Motion recently launched its fitness app, which is free on the app store and has so far had 1200 users plus downloads.

Firmo likens the app to a “digital personal trainer” and says it can fill a significant gap in the technology-aided fitness market.

He says the Mova app will be a lower-cost option to gym goers than wearables, but will feature a lot of the same functionality: “As far as we know, we are the only app that reacts to the user’s activity, and adapts to what the user is doing.”

The app can count reps and track the range of motion of a particular exercise, depending on where on the body the smartphone is worn (a standard fitness-phone holder can be used). It also offers users tips to improve or correct their technique, measures the “time under tension” for a given workout -- which is how long muscles are under strain, and is commonly used in bodybuilding -- and it can provide users with optimal rest times, says Firmo.

“The goal is to help gym-goers achieve their fitness results faster with fewer injuries.”

The team is building stages of the app to target different users: beginners who are more prone to injury due to poor form, intermediates who may benefit from an app to keep them motivated and on-track, and advanced athletes, who may want more in-depth data and info about their workouts to achieve peak performance.

Firmo says the feedback from users and personal trainers so far has been positive.

“We want to show investors that this product can work and scale-up.”