Advice from a rapper 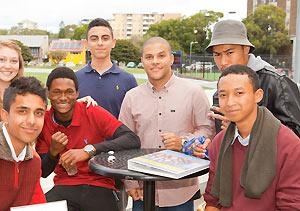 The co-director of the award-winning Bra Boys documentary spoke to students from 22 NSW schools taking part in UNSW’s Step UP program, a three-day academic program for Year 11 students from regional and local high schools.

ASPIRE is a social inclusion initiative that actively promotes university to primary and high school students from low socio-economic backgrounds. It has assisted several thousand students since its inception in 2007.

“Barriers come up, opportunities come and go, doors open and close, you just need to keep your head down and roll with the punches,” said De Souza, otherwise known as rapper, Kid Mac.

This year’s Step Up involved 111 students, the largest intake to date, with 37 students travelling from regional schools to attend the program where they took part in academic skills workshops, group projects and explored pathways to university.

De Souza, who grew up in Maroubra and first experimented with a camera when he started filming his friends surfing, told the audience how he broke away from the “the local pack” when he decided to study a Bachelor of Fine Arts majoring in Time Based Art at COFA.

“Don’t get stuck in a group culture,” he warned. “If you have a passion for something don’t let what your friends think stop you – step up and do it. Work hard because nothing comes easy.”

Bra Boys, which De Souza started as a COFA assignment, became Australia’s highest grossing documentary. The rapper was named Artist of the Year at the 2012 MusicOz Awards and was recently awarded two AACTAs (formerly AFIs) for best direction and cinematography for his new documentary Fighting Fear.

ASPIRE Project Manager Fiona Nicholson said De Souza’s words were invaluable because he had experienced the same challenges many ASPIRE students face on their path to tertiary education.

“Mac’s openness to share his story with our Step UP students was an inspiration.  Many students do not pursue education because they feel they don’t fit the stereotype, or it’s not what their mates do, but Mac’s story showed them you make your own path in life.”

Thanks to Federal Government funding and a donation by Citi Foundation, ASPIRE will welcome more than 500 Year 9 students from across the state to UNSW in July to participate in two programs, Beyond the Gate and Uni for a Day.