From wearable sunburn sensors and radical environmental justice, to predicting deluge patterns and stopping HIV in its tracks, UNSW's inspiring young researchers are changing the face of the city. 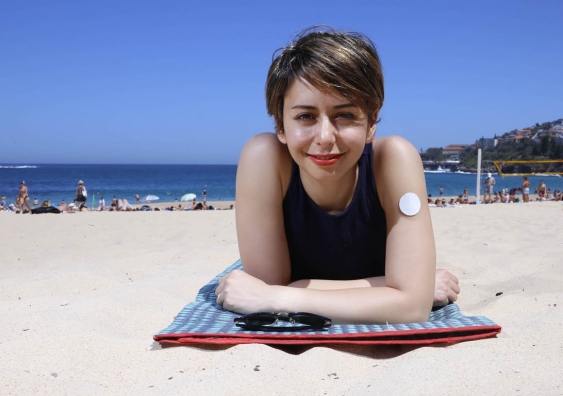 “Living in Australia, people really need a simple and inexpensive way to let them know when they are overexposed to the UV of the sun,” says Dr Parisa Sowti Khiabani.

Through her PhD in chemistry, Dr Khiabani was part of a team that developed a paper-based sensor that can be worn on the skin to monitor our exposure to the sun and warn us when we’ve had too much. Coloured blue, the sensor discolours gradually in response to UV light. It is calibrated to simulate the varied UV exposure times of different skin types, even after sunscreen has been applied. The sensor is made of benign materials such as food dye and can be made through ink-jet printing.

The team has already submitted the first draft of its patent and is working on commercialising the sensor to market to users in Sydney and around the country.

“As we all know, it is really easy to get sunburn here in Australia, which causes high rates of skin cancer. We hope this paper-based, wearable sensor will decrease skin cancer rates by stopping people, especially kids, from getting sunburned frequently.” 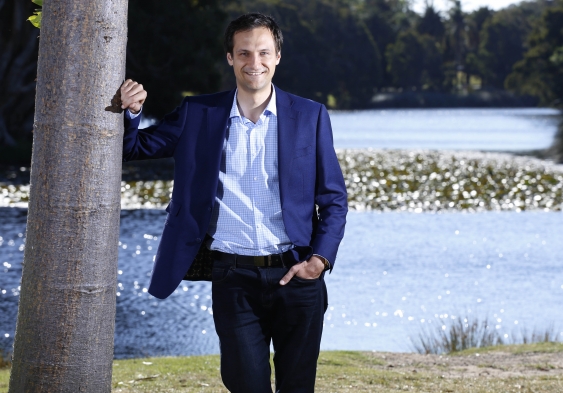 As a consulting engineer, Conrad Wasko always enjoyed applying statistics to engineering problems. So when he heard there was an opportunity to combine the two in a PhD in civil engineering at UNSW, he jumped at the chance. The title of his thesis is “Continuous rainfall simulation in a warmer climate”.

It focuses on how climate change is expected to lead to increased rainfall intensities.

“I look at historical data and develop statistical relationships between precipitation and temperature. I then use the relationships I have developed to simulate what rainfall might look like as the climate warms. This simulated rainfall is then used in flood models to assess the impacts of climate change on the ground,” says Wasko.

As Sydney’s storms of the last winter demonstrated, past and current patterns provide an important yardstick for the uncertainties of the future. “Engineers design infrastructure assuming the past climate represents the future climate. However, we now know the climate is changing and this is likely to significantly increase extreme flood events,” Wasko warns.

“This research is focusing on producing accurate realisations of what rainfall will look like in the future, which will allow engineers to design water infrastructure that can cope with changes in rainfall. This should mean, for Sydney and beyond, our stormwater drainage systems and roads will flood less and the risks to life will be reduced.” 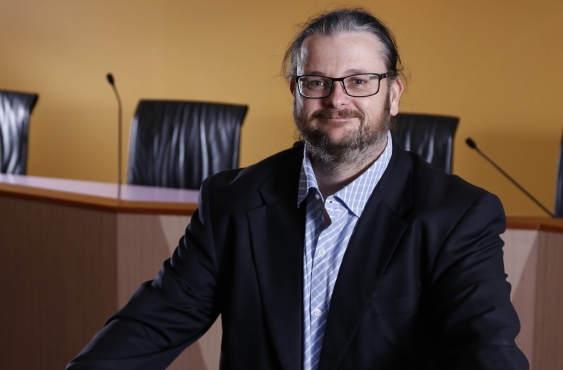 Can restorative justice help non-human ‘victims’ of environmental crime as much as it can people? That’s one of the central questions Mark Hamilton is determined to answer with his PhD in Law.

When he was studying his Masters in environmental law, Hamilton worked as an assistant to a judge in the NSW Land and Environment Court. The job gave him the opportunity to sit in on many court cases, during which he noticed that not all ‘victims’ in the prosecutions were involved in the proceedings in a meaningful way.

The principles of restorative justice aim to rehabilitate offenders through a facilitated dialogue with victims and the community. However, what happens when the victims of environmental crime aren’t always individuals, but can be neighbourhoods, animals and ecosystems? Can a dialogue still take place and can offenders still be made accountable for their actions?

Although his research has broad applicability, it has a strong Sydney focus. Restorative justice for environmental crime is likely to be more applicable in big cities, which have intensive industries and whose environmental harm is more likely to impact on neighbouring populations. Sydney is also home to key environmental institutions such as the NSW Land and Environment Court and the NSW Environment Protection Authority. 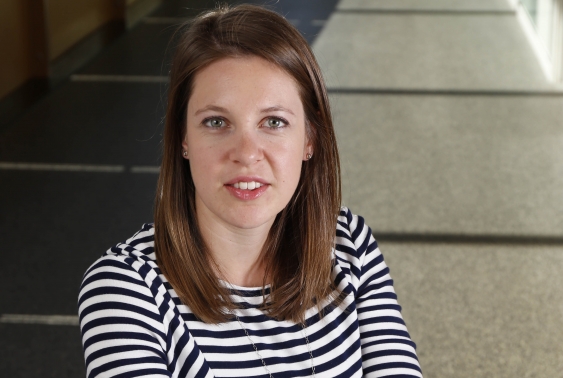 “I always wanted to be in a role where I could make a difference in people’s lives, so working in HIV prevention seemed like an ideal fit,” says UNSW Public Health PhD candidate Stefanie Vaccher.

While she was at school, Vaccher volunteered in a township in South Africa, where HIV permeated all aspects of life. The experience left a deep impression. Years later when she saw UNSW’s Kirby Institute was advertising a study into HIV prevention, she leapt at the opportunity.

Vaccher’s research centres on a new HIV prevention strategy, called pre-exposure prophylaxis (PrEP). More effective than previous interventions, it involves HIV-negative people taking a daily antiretroviral medication traditionally used to treat people already infected with the virus. It dramatically reduces the chances of contracting HIV but only if it is taken every day. More than 3,500 people, mostly gay and bisexual men who are at high risk of infection, are currently in a trial to determine the strategy’s effectiveness.

Earlier this year the 24-year-old presented a paper at the international AIDS conference on the Kirby Institute-led EPIC-NSW/PrEP trial. She says her research “will inform healthcare providers, policy makers, and PrEP users about the ideal way” to take PrEP, and deliver strategies that can be used to improve adherence. 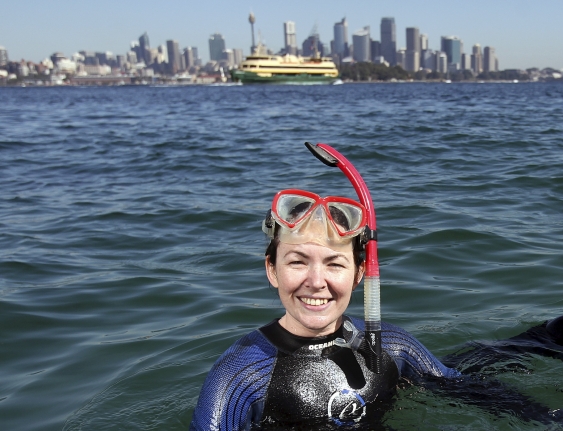 Marine scientist Dr Katherine Dafforn works below the waterline to reduce the impacts urbanisation is having on our coastal environments and waterways. “Part of this involves working with engineers to build structures like seawalls, breakwalls and boating infrastructure to resemble natural habitats and support native marine biodiversity,” she explains.

The 2016 Tall Poppy award winner, whose PhD in 2010 investigated how copper-based paints used on boat hulls helped promote the spread of invasive marine species, says Sydney is on the brink of an infrastructure boom. And many of those projects are focused around the harbour foreshore.

“If we can incorporate ecological ideas into these projects’ engineering designs from the outset, such as building underwater structures to mimic natural habitats, the construction of marine infrastructure can have long-term benefits,” she says.

“These include a boost to native biodiversity, but there is also increasing recognition that human health and wellbeing can be improved as well through interactions with this ‘blue space’.

“Ecological enhancements of seawalls and other foreshore developments can increase the connection that Sydney residents have with the harbour marine environments, providing social benefits.” 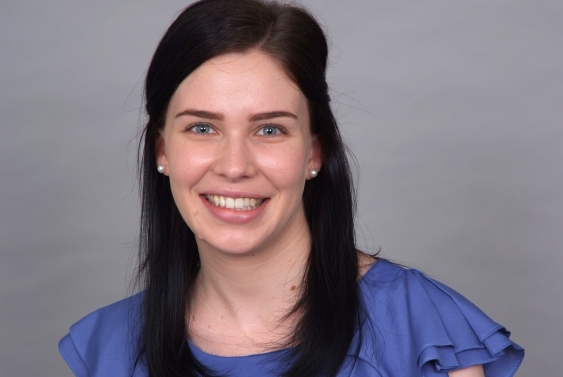 “I  have always had an interest in marginalised groups and social determinants of health. When I moved to Sydney seven years ago, I was struck by the visibility of the homeless population in inner Sydney,” says Liz Whittaker.

The PhD candidate, based at the National Drug and Alcohol Research Centre, is investigating the links between substance abuse and homelessness in Sydney. Her research has a twin focus. First, she is examining specific subgroups that experience a greater vulnerability, such as people who regularly inject drugs or who sleep rough. Second, she is conducting a 12-month evaluation of two housing programs: one that allocates the chronically homeless to private rental apartments scattered across Sydney, and another that allocates an apartment to homeless people in a purpose-built building with round-the-clock support on site.

Whittaker believes her research offers “an opportunity to build upon a small evidence base to better inform policy decisions”. It has significant potential to impact on housing solutions for the homeless, and to find out which models work best for particular subgroups.

“There is a pressing need to further examine which cohorts have better outcomes in specific models. For example, do those with a schizophrenia diagnosis report better individual outcomes in an independent living arrangement or a congregated setting?” 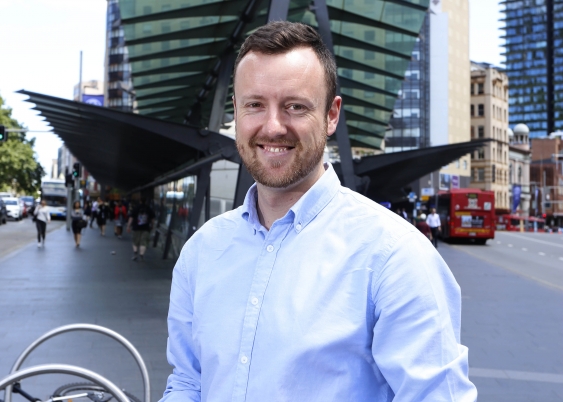 Tim Tompson has long been interested in the intersection of technology and society. The industrial designer and social science graduate from the UNSW Built Environment City Futures Research Centre has been involved in several transport projects over the last decade including car-sharing in Italy (2008), electric vehicle uptake in the Netherlands (2008-09), and an on-demand bus service prototype, similar to UberPOOL, in Sydney (2010).

Tompson’s PhD investigates the social, technical and political negotiations that took place between stakeholders in two projects relating to the introduction of new customer information systems for Sydney’s transport network. The first was an Australian Research Council project called “Responsive Transport Environments”, investigating user-responsive digital technologies to allow improved passenger flow and customer experience. The second was the unique process of development and maintenance of the first six real-time applications for Sydney.

“The smart city has become a trojan horse for conversations with municipal government to introduce many initiatives,” he says. “Introducing social science to describe these networks enables a deeper understanding of the relationships between the various elements. The design of these technological systems is important, because these will define our terms of access to one another.”