Once the domain of software and cyber security, student-led hackathons are emerging as a creative force for good in diverse and unexpected areas. 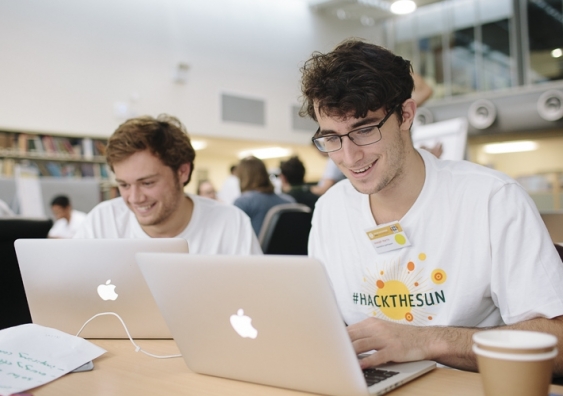 Once the domain of software and cyber security, student-led hackathons are emerging as a creative force for good in fields as diverse as renewable energy, fishing, fashion and finance.

This past Earth Day, a weekend-long hackathon kicked-off inside the Michael Crouch Innovation Centre at UNSW.

Upwards of 85% of the world’s fisheries are affected by overfishing, which threatens marine environments, as well as the livelihoods and health of fish-dependent populations. 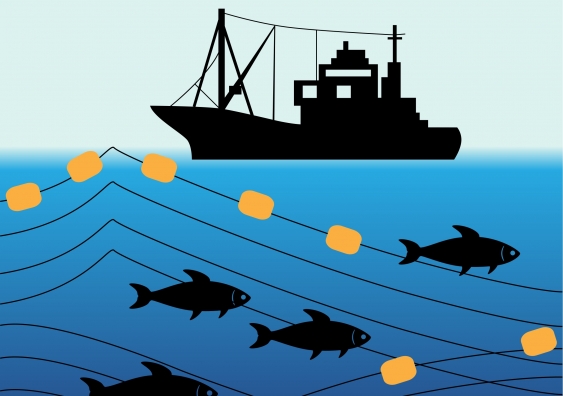 The event at UNSW was part of the 2016 Fishackathon, a global competition run by the US Department of State, which sees coders tackle real-world challenges faced by experts working to manage fish stocks more sustainably.

This year’s challenges ranged from improving data collection and minimising the impact of lost fishing gear such as nets, to helping consumers identify mislabelled fish products, says Anatoly Logunov, who, with fellow UNSW alumnus Mitchell Kardan, was instrumental in bringing the event to Sydney.

Logunov says the most exciting part of the weekend was “watching the creative process in action”.

Teams collaborated, brainstormed, developed solutions, networked with peers, learned from mentors and each other, and pitched their work to a panel of expert judges.

Hackathons promote the idea that you don’t have to know exactly everything about a challenge, you can just start and refine your idea as you go. It’s very closely aligned with how innovation should be done.

And far from being wasted effort, other ideas and technologies may be used and adapted by management agencies around the world in future, under creative commons licences.

This is the point of hackathons, which are essentially a testing ground for novel ideas. They provide a glimpse into what can be accomplished in a relatively short time frame with limited resources.

Hackathons bring intelligent people with different skill-sets and perspectives together, and strive to spur some kind of innovation or improvement, either for capital gain or public good.

This could be usable software, to more efficiently monitor fish stocks, for instance, new code in a particular programming language, or a mobile application.

“Software development has moved from one big sequential task to this idea of fail fast,” says Professor Fethi Rabhi from the UNSW School of Computer Science and Engineering (CSE).

“Hackathons promote the idea that you don’t have to know exactly everything about a challenge, you can just start and refine your idea as you go. It’s very closely aligned with how innovation should be done.”

Hackathons typically last between 24 hours and one week (though some last longer). Energy drinks, pizza and prize money are staples, but good hackathons also need well-defined challenges worth solving, mentors to coach participants, expert judges to evaluate the solutions, and networking opportunities.

Over the last two decades, businesses and organisations have used hackathons to develop new products, kick-start companies, or identify flaws in existing systems, software or protocols. 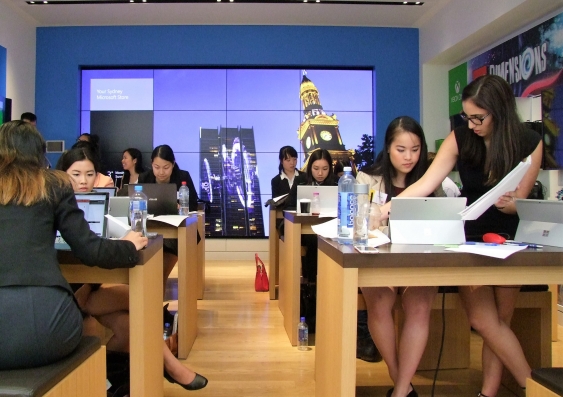 Students hard at work during the UNSW Fashionista Challenge.

“They can give organisations an outside view of what can be improved upon, and give feedback that might not otherwise be raised internally,” says Mary Liu, who looks after student entrepreneur development for UNSW Innovations.

But hackathons are also being used to solve a broader spectrum of challenges, in fields ranging from ocean sustainability to solar energy, and even fashion.

In partnership with Microsoft and online retailer The Iconic, Liu has helped organise the UNSW Fashionista Challenge, a one-day hackathon aimed exclusively at female business and engineering students. 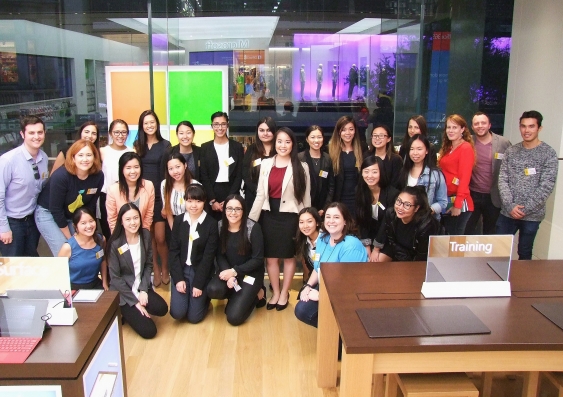 Participants in the UNSW Fashionista Challenge.

Liu, who started a company while studying at university, hopes the challenge will encourage more female students to think about entrepreneurship as a career option.

“But in a hackathon there’s a low-cost of failure,” she says.

Earlier this year, the CSIRO hosted a Solar Hackathon, which gave teams of students from around Australia roughly 10 hours to improve Australia’s energy sector. 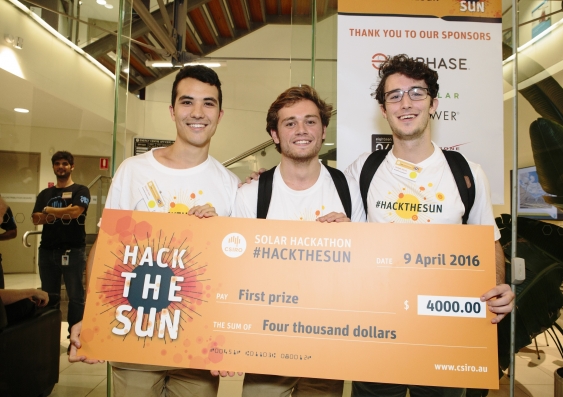 Their idea was to incentivise smarter energy use with a competitive online platform. Users could track their power consumption and renewable energy generation, compare their stats with friends, and make small wagers about their energy efficiency with virtual currency.

“You really just have to focus on showing the judges your vision, so they can see what your idea is and where you think it can go,” says Tam.

“When we heard our names read out all of our jaws dropped,” he recalls “We’re a bunch of third-year students. We were really just looking to get a bit of experience and exposure to the industry.”

Tam says the best thing that came from his first hackathon was the networking: “You make friends, contacts, and you get to know people in the industry. It’s so valuable, and you don’t really appreciate it until you participate in something like this.”

UNSW students have a stellar track record in hackathons. In 2015, the University dominated the podium at the Australian Cyber Security Challenge. It was the third consecutive year UNSW students placed first, second and third in the nation’s toughest 24-hour hacking competition.

But not every hackathon is conducted in typical marathon fashion. UNSW recently partnered with ANZ Bank, Thomson Reuters and IBM to host a data sciences hackathon, which spanned six weeks.

Business and IT students from UNSW were presented with a real challenge faced by one of the bank’s business units: how to effectively leverage big data analytics to improve agricultural commodity trading between Australia and Asia.

“That problem is not confined to just economics or agriculture, or weather or computing. It touches so many things,” says Professor Rabhi from CSE, who helped organise the event. “A lot of business problems are like that.” 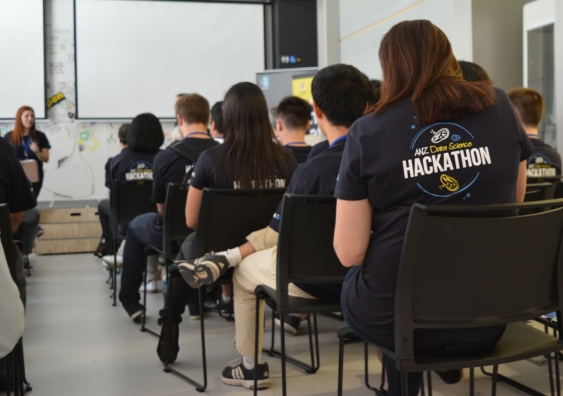 In the software industry, he says you have “some problems that are easy to define, but you have to sweat hard to build the software”.

“Other problems are harder, but once you understand them, building the software is easier. We were dealing with the latter. We wanted the students to really understand a complex problem so they could contribute to a solution.”

PhD student Ali Behnaz led the winning team, which developed a platform that enables analysts to explore, from hundreds of indicators, beef production and consumption patterns, and forecast market volatility.

“Problem definition and appropriate communication about the problem, as well as access to the right data and proper coaching are key elements for a good hackathon,” says Behnaz.

Rabhi says the aim of the hackathon was to establish a longer-term partnership with ANZ and to “open the door for future collaboration”.

“It gives them some insight around our capabilities,” he says.

Rabhi believes Universities shouldn’t simply try to replicate corporate hackathons but should focus on tackling knowledge-intensive challenges: “The starting point has to be, ‘what are the things that we are good at?’ And then, ‘how do we put that in the hands of the right people and let them create something new?’.”

He says one way universities can leverage knowledge is by giving it to students... and then let them loose so that they can innovate.