Industrial design student Angela Lam designed a device called PawsyWalsy that could let her play with her dog left at home while she studied at UNSW. 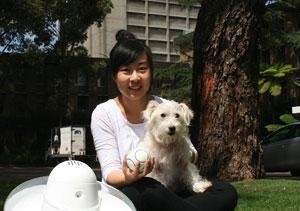 Angela Lam designed a device that could let her play with her dog left at home while she studied at UNSW.

The industrial design student was worried her little dog Dopey was lonely while she was away, so she used her skills to design a device that allowed her to see him at home, talk and play with him while they were separated.

As part of her degree at UNSW, Angela built a model prototype she called PawsyWalsy, a device that would be operated remotely via an app.

From her mobile phone she could speak to the dog through a loudspeaker and order the device to release a special ball with a mechanism inside to roll around the house for several minutes entertaining Dopey.

The idea is she could even watch the dog play through a video in the device, which could also release odours to freshen the air in the home or calm the dog.

“I felt so sorry for Dopey who was bored at home all alone while I was at uni, so I thought up this device so that I could play with him even when I wasn’t there,” said Angela, 23, from Maroubra.

She hopes to build a working model that would sell for around $300.

PawsyWalsy is one of many projects by graduating students from UNSW’s Faculty of Built Environment currently on display at Pier 2/3 at Walsh Bay until November 22 in a free public exhibition, LuminoCITY. The program also features public events and lectures.

Designs to change the world

A trifecta by design

A trifecta by design