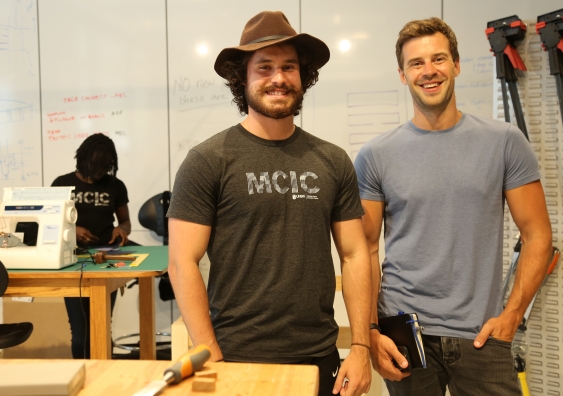 “When I first came to the Michael Crouch Innovation Centre (MCIC) I knew this was the place where everything could happen. All the innovation and all the good minds aiming for success are here,” says the mechanical engineering student from Brazil’s University of Santa Catarina.

“A place where you can create things and take something from zero to one? That’s paradise,” he says, describing the Centre which is an innovation hub and creative space for students to experiment, connect and showcase their ideas to corporate and industry partners.

Neto’s instincts were correct. Within just one year, he and Afonso Firmo, a UNSW environmental engineering student from Portugal, have developed Mova, an iPhone app that acts as a physiotherapy tool for patients recovering from knee reconstruction surgery.

The app works by patients strapping their iPhone to their operated knee and completing repetitions. The data is then relayed directly to their physiotherapist, allowing patients to complete their recovery at home.

“Mova guarantees that patients are correctly executing their exercises through the use of smartphone sensors,” says Neto. “Our app improves physiotherapy for each patient, ensuring an engaging experience with instant feedback on every rep.” 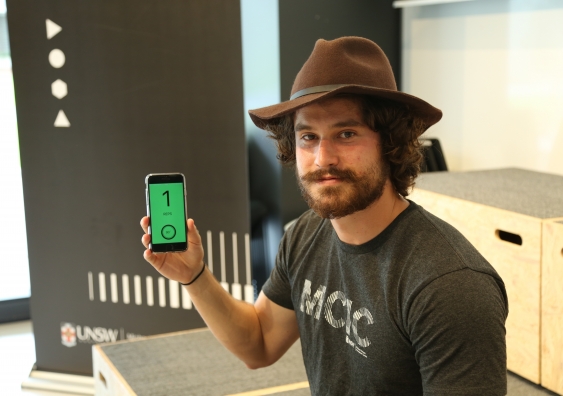 Neto with the Mavo app that will allow patients recovering from knee reconstruction surgery to complete physiotherapy in the comfort of their homes. Photo: Leilah Schubert

The students say they were inspired by their “not so cool” experiences recovering from various sporting injuries – Neto has trained in martial arts since he was six and Firmo is an experienced rugby player.

“Mova works like a game, you have your goals and in each movement you have to reach the extension range previously set by the physiotherapist to succeed,” says Neto.

The student’s idea for Mova won them the Johnson & Johnson health-tech HaTCHathon in September last year, but they say the app would have never been developed without the expertise and mentorship of MCIC’s inaugural Catalyst in Residence, Gary Elphick.

Elphick is the creative mind behind Disrupt Sports.com, a platform specialising in the personal customisation of sports equipment and winner of Optus Start-up of the Year and Young Entrepreneur of the Year. As MCIC’s inaugural Catalyst in Residence, Elphick’s job has been to mentor students through their startup ideas.

We want to get this app in every physiotherapist’s hands because we know we can help a lot of people.

“I’m here to help facilitate the different phases of beginning a startup, right from the ‘no idea’ phase to the incubation phase. Combined with all the benefits a university provides, it’s great to be able to give students a little leg up, just the confidence to go, ‘oh cool, I get it’.

“UNSW and MCIC offer an incredible R&D environment – I just wish I’d had access to something like this when I was at uni,” he says.

Having worked in the UK and Silicon Valley on startups, Elphick says Australia’s innovation community beats both countries hands down.

“What Australia lacks in size it makes up for in community and that networking extends globally. It’s places like MCIC that help add to those international networks of young innovators.”

Even though his Residency is coming to an end, Elphick says he’ll continue to be part of MCIC’s growing alumni community and network.

“The Catalyst in Residence works from a ‘pay it forward’ mentality, I’ll always be available to help out and give back.”

Backed by UNSW, MCIC has already seen its first cohort of 16 startups and more than 100 entrepreneurs and experts pass through Australia’s first post accelerator residence program.

“The MCIC Catalysts have inspired creativity and talent, and have helped turn good ideas into real and tangible products. Since opening our doors in August 2015, the MCIC has generated more than 30,000 engagements with end users. As we look into 2017, our network is generating more viable projects like Mova, and demand is growing exponentially,” Furber said.

Meanwhile, Neto and Firmo are in the final stages of being accepted into the HCF Catalyst Program, an intensive 12-week accelerator worth $50,000, followed by a three-month mentored incubation period to further develop Mova.

“The HCF Catalyst Program will allow us to have Mova professionally validated. We want to get this app in every physiotherapist’s hands because we know we can help a lot of people,” Neto says.

“When you are bitten by the entrepreneur bug you don’t have a choice, you have to validate your idea and that’s the path I’m going to travel. This is what makes me feel alive, and MCIC is the place that will give me the traction that I need to succeed.”

Applications for the 2017 MCIC Catalyst in Residence have now opened. The Centre is offering office space for 16 startups for the first half of 2017. Click here for more details. Applications close 30 January.

Finding a better, innovative way to the future