Is it safe to talk to your car? Participants sought for distracted driving study

Drivers who use hand-held or hands-free mobile phones are up to nine times more likely to be involved in a crash. Could in-built voice control be the solution? UNSW transport safety researcher Nurul Ibrahim wants to find out. 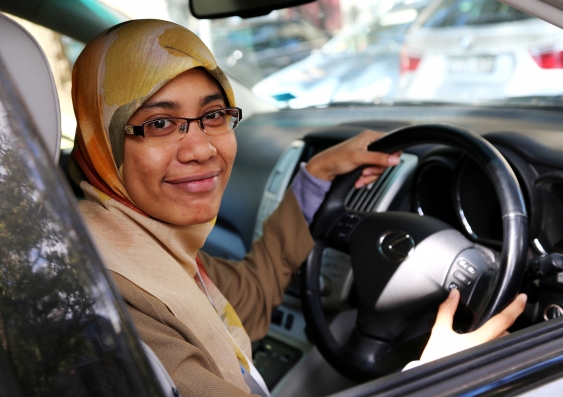 Nurul Ibrahim is looking for drivers who use a voice-control interface in their cars. Image: UNSW Media

When you get behind the wheel, do you speak to your car? And does it listen? Are you on close terms with Siri, or other voice-controlled smartphone apps? If so, UNSW transport safety researcher Nurul Ibrahim wants to hear from you.

Ibrahim is conducting PhD research to find out more about which drivers use these interfaces and how they interact with them.

Driver distraction is a big cause of vehicle accidents. Drivers who use either a hand-held or hands-free mobile phone are two to nine times more likely to be involved in a crash.

One solution being touted is voice-control interfaces. Many new-model cars have in-built voice control to allow drivers to make phone calls, adjust the temperature or use a sat-nav.

For example, a driver can use voice commands such as “call Mike” and the car will access the driver’s smart phone directory to make the call, or “Italian Restaurant” and the sat-nav will point the way to the nearest pizza.

But the safety of these systems is not well understood, and some research has suggested that they may not be much better than hands-free when it comes to driver distraction.

The first stage of the UNSW research is to understand the pattern of use of voice-controlled interfaces.

“It is really important to know why people are using it,” says Ibrahim, who initially studied Manufacturing Engineering before completing a Masters in Design & Ergonomics.

“I’m interested in both those who use the interface on their phone and those who don’t use it. I’m also looking for people who use a voice-controlled system in their vehicle.

“People who have medical or physical problems might be using a voice-controlled interface and I’d like to hear their perspective as well,” she says.

Ibrahim says the findings from the current study will guide future driving simulator studies, which will uncover the positive or negative impacts on traffic safety and driver performance.

The study, which is being overseen by Dr Carlo Caponecchia, from the School of Aviation, is looking for participants aged 18 years and above who:

Song tutoring can help save the regent honeyeater