As the 2017 Roger Covell Fellow, pianist and composer Satoko Fujii has been helping UNSW music students hone their improvising and performance skills. 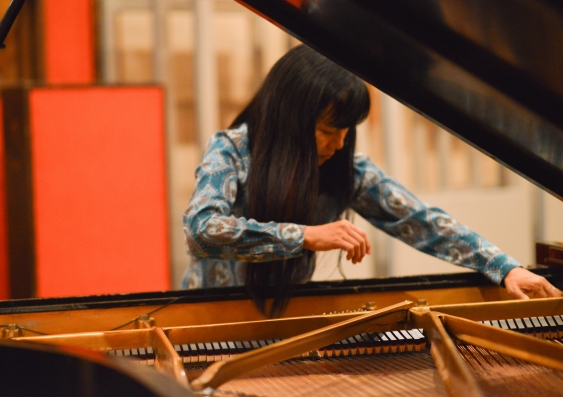 Satoko Fujii began playing the piano when she was four, and spent the next 16 years studying classical music.

Somewhere along the way, though, Fujii felt the urge to break free of the classical tradition and, as she puts it, “just hit things on the piano to explore the sounds”.

At age 20, keen to explore improvisation further but realising that her natural flair for it had almost been trained out of her, she took a year off from playing piano and studied jazz.

Today, the Japanese-born Fujii is regarded as one of jazz’s most original and exciting composers and performers. Working in ensembles ranging from duos to big bands, her musical styles are as varied as they are adventurous: intimate solo piano pieces influenced by Japanese folk and classical music; dense layers of sound and edgy avant-garde inventions; and high-energy big band works marked by collective improvisation.

For the past two weeks, UNSW music students have had the opportunity to see Fujii’s talents up close: as the 2017 Roger Covell Fellow, she has been in residence at UNSW, helping students hone their performance and improvisation skills and prepare for two public concerts.

The residency came about through the efforts of Alister Spence, Sydney jazz luminary and now a member of the music teaching staff at UNSW. 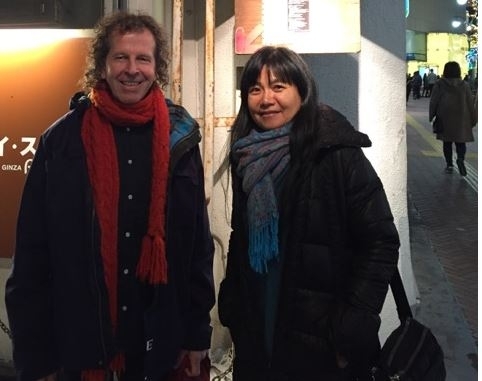 “She’s a good friend of mine, we’ve collaborated for many years,” says Spence, a keyboard player renowned for his improvisation skills.

Satoko and her husband, trumpeter Natsuki Tamura, are in Australia thanks to an Australia Japan Foundation grant to support the ongoing collaboration between them and Spence, and the residency is one facet of that that.

“This is the first time we have had internationally recognised improvisers in residence at UNSW,” says Spence.

On 25 May, Spence will be in conversation with Fujii for the annual Covell Lecture. We Can Play Anything will be a rumination on musical identity and the importance of curiosity and a demonstration of just where that curiosity can take a musician.

The following night Fujii and Tamura will join the UNSW Jazz Orchestra and Advanced Jazz Ensemble for Listen Up!, curated and conducted by Spence and internationally renowned saxophonist and composer Sandy Evans, who has also recently joined UNSW’s teaching ranks on a permanent basis.

Fujii and Tamura will join UNSW’s Advanced Jazz Ensemble to play a set of Satoko’s compositions before Satoko takes up the baton to conduct the UNSW Jazz Orchestra performing her 2016 composition Fukushima Suite, with Tamura as guest trumpeter and soloist.

The evening will include a special improvisation by Satoko, Tamura, Spence, Evans and cellist John Napier.

Spence says the residency comes as UNSW is beefing up its jazz studies, which until recently has had only casual academic input.

“I think at UNSW, you’re always dealing across genres and across styles and you’re mixing with people across different practices, which is a really healthy thing. I think that’s the strength of this school. We’re trying to promote and strengthen jazz and improvised performance so it’s attractive and relevant to people but still have these outlets and possibilities for cross fertilisation,” he says.

“The improvisation we’re talking about here is not necessarily jazz focused. You’re trying to equip people with skills for making music up on the spot.”

That is as much a thrill for him as it is for the students who find their creative voice: “I do enjoy seeing people get genuinely excited about improvising,” Spence says.

“We have a fundamentals of improvisation course which is largely dealing with classical musicians who’ve never improvised before, and that’s always very exciting for me. They love it.

“The more you do it, the more comfortable you get with it. It often just takes the first few minutes and students say ‘Oh, I know stuff!’ It’s building on the foundations of their musical knowledge, and they’re very skilled and have good ears so they can definitely do it. It’s just that they’ve never had a go at trying before, so I really enjoy that side of it.”

"We can play anything": Satoko Fujii on creative determination and the musical self is at Io Myers Studio on 25 May, 7-9pm. The event is free, registrations essential here.

Listen Up! Satoko Fujii with UNSW Music is at Io Myers Studio on 26 May, 7-8.30pm. Tickets available here.