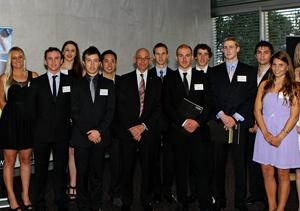 The winners include five first-time recipients:

The students were recently presented with their scholarships at the Annual Blues and Sports Awards event by UNSW Vice-Chancellor Professor Fred Hilmer.

The Ben Lexcen Sports Scholarships are awarded to UNSW students for outstanding sporting achievements on the national or international stage.

This year’s winners include 11 men and 11 women, competing in a diverse range of sports including cricket, water polo, sailing, judo, field hockey and table tennis.

Nearly 25 years ago, UNSW became the first Australian university to establish a program of sports scholarships and today provides more than $175,000 in support to talented student athletes.

The prestigious Ben Lexcen Sports Scholarships provide $5,000 in financial support to individual recipients and a mentoring program to provide scholars flexibility in managing their study and sporting commitments.

Tickets and prize proceedings from this year’s UNSW Sport Hall of Fame Lunch, to be held on June 8, will go towards funding the scholarships.

Olympic silver medalist sprinter Patrick Dwyer, and former Rugby Union player Ewen McKenzie, will be inducted into the Hall of Fame at the event.

Since their inception, more than 160 students have received the scholarship, including numerous Olympians, some of who will represent Australia at the upcoming London games.