After six years of study, and support from Shalom Gamarada, Indigenous students Luke Walker and Jason Sines are returning to rural NSW to start new lives as doctors. 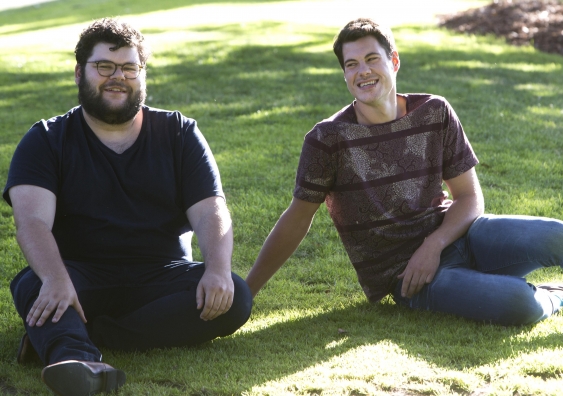 When Luke Walker and Jason Sines arrived at UNSW Sydney in 2012, they were daunted by the road ahead of them – six years of university study and hundreds of kilometres between them and their families.

A Wiradjuri man from the NSW town of Narromine (population 3800) near Dubbo, he was used to walking down the street and seeing only familiar faces.

But the whole community was behind him, and sending their well wishes via his mum, Debbie, who works at the town’s pharmacy.

Jason would also learn that he needed to build new support networks at university. A Bundjalung man, Jason was the first Indigenous dux of his high school in Ballina, northern NSW, where his mother, Angelique, works. His father, Jason Snr, works in the Department of Education.

The students met at the pre-program for medicine at Nura Gili, and both received six-year Shalom Gamarada residential scholarships. These scholarships aim to increase the number of Indigenous Australians studying and practising medicine by funding tuition and board at UNSW’s Shalom College.

The Shalom College community became like family for both men, who had strong personal motivations to study medicine.

Luke became attracted to medicine after observing the doctors who had treated his father, Richard, who died from renal cancer when Luke was in primary school.

The youngest of three boys, he recalls how the doctors communicated differently with each member of the family throughout his dad’s year-long illness, so each could understand the situation.

“That was probably the most important thing they could do,” he says. “They could extend Dad’s life, and do only that, but we wouldn’t have known what was happening.

“Because we were aware of what was happening, we kind of got some sense of control back. That’s what drew me into medicine.”

It’s important to me to work in the country because I was raised in a rural area, I just feel that I want to give back to the country.

Jason was in the early years of high school when he lost his grandmother. Dawn Sines was only 60 when she died, and had required dialysis for kidney disease for many years.

“At the time, it seemed like a normal thing, I didn’t really see anything unusual about it,” Jason says.

“But then I did some research for an assignment at school, and I learned about the disparity in life expectancy for Indigenous people. It was completely shocking to me, and that was one of the main reasons I was attracted to medicine.”

At the national level, the life expectancy gap between Aboriginal and Torres Strait Islander and non-Indigenous people is 10.6 years for men and 9.5 years for women.

Jason knows having more Indigenous doctors will help to close the gap, and that has kept him going through the hardest times in his degree.

In November he packed up his room at Shalom College ahead of starting his career at a hospital in the rural NSW town of Orange.

“It’s important to me to work in the country because I was raised in a rural area, I just feel that I want to give back to the country,” he says.

Down the hallway, Luke was packing his bags for a hospital in Dubbo, which he hopes will lead to a placement in paediatrics the following year.

“All of us Indigenous doctors want to improve the health profile of Indigenous people, and I think one of the best ways of doing that is to start young and create relationships between a child and their practitioner,” Luke says.

He hopes too that more Shalom Gamarada scholarships can be funded, so that students don’t have to struggle to make ends meet, on top of worrying about their studies.

“Over the past six years I’ve been able to surround myself with strong friends,” he says. “Seeing the way they dealt with challenges, I was able to lean on them, and learn from them.”