UNSW student Andrew Blackie is heading to China to compete in the finals of an international language competition that will be broadcast to an audience of 20 million. 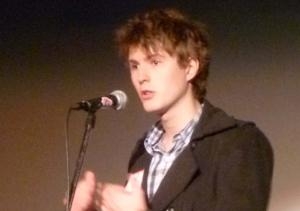 UNSW student Andrew Blackie is heading to China to compete in the finals of an international language competition that will be broadcast to an audience of 20 million.

Run by the Chinese Ministry of Education, Chinese Bridge is a language proficiency competition for non-native Mandarin students.

Andrew, who first took up the language as part of his International Studies/Law degree, believes that learning Mandarin is particularly important for Australians.

“It equips you to engage better with our region and with a country that is already so vital to our interests,” he said. “On a personal level, learning about and becoming familiar with a culture so different from your own is immensely rewarding.”

Andrew won the regional finals in Sydney last month to qualify for the international finals, where he will compete against 110 college students from over 60 countries. The winner receives a prestigious scholarship to study in China.

“I’ve been speaking with my Chinese friends regularly about it and asked some past contestants what to expect, so as not to get too overwhelmed,” he said. “My Chinese teacher, Chen Xiaofang, has also been invaluable in helping me prepare at every step of the competition.”

The theme of this year’s competition is ‘My Chinese Dream’ and finalists are required to prepare a speech on the topic along with two cultural performances.

Andrew will perform a traditional Chinese comedy called xiang sheng, as well as a rewritten voiceover of the Chinese epic Journey to the West.

“My Chinese dream is to help Australians become more aware of China and understand it better,” he said.

“I believe everyone should be bilingual as it broadens your career opportunities, encourages you to make friends across cultures and allows you to understand the world better.”

The finals will be held in early July.

Qantas to spread its wings in China