A team of soccer-playing robots programmed by UNSW engineering students has placed fourth in the 2013 RoboCup competition in the Netherlands. 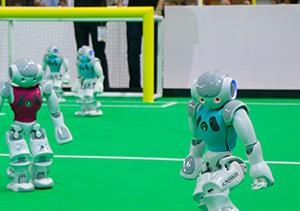 A team of robots programmed by UNSW engineering students to function as soccer players has placed fourth in the annual RoboCup competition, hosted this year in the Dutch technology hub of Eindhoven.

Team rUNSWift, comprised of five students from the School of Computer Science and Engineering, competed in the standard platform league of the competition, which sees 22 teams of autonomous humanoid robots take to the soccer field.

Faced with the extra challenge of a field more than double the size of last year’s, rUNSWift played their fiercest game against team Austin Villa (USA) going down 4-0. (A video of the semi-finals is viewable here).

While all sides had the same robots, teams had to focus development on software design, both for the control of the robot and their human-like movements, and for successful analysis of the environment so the robots could react appropriately.

“The goal is to have the robots functioning as soccer players so they are able to communicate with their own team and coordinate in a competition against other teams,” says team member and fourth-year Aerospace Engineering/Computer Science student Dan Padilha.

The overall objective of RoboCup, says Padilha, is to further research into Artificial Intelligence and to advance robots’ ability to interact with their environment using only software.

“Ultimately, the aim is to have a team of robots win against the 2050 FIFA World Champions,” he says.

rUNSWift placed third overall in the technical challenges, which involved demonstrating how their robots cooperated with other robots, machine-learned stabilisation and robot ball skills.

Brad Hall, Development Manager in the School of Computer Science and Engineering, says RoboCup is a unique experience for students, who are not only researching Artificial Intelligence and robotics, but also gaining a wealth of experience and knowledge in project management, time allocation and group dynamics, “skills that employers highly value,” he says.

It is the 14th year UNSW has participated in the international competition. Next year rUNSWift will compete in Brazil, followed by Thailand in 2015. 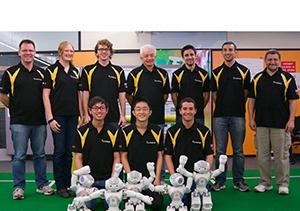