UNSW international student Colin Cheng has been selected to represent his home country of Singapore in sailing at the London Olympics. 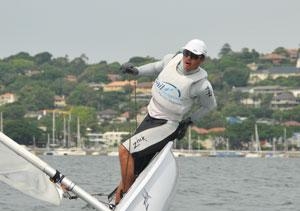 UNSW international student Colin Cheng has been selected to represent Singapore in sailing at the London Olympics.

“It is a tremendous privilege to represent my country and compete against the best sailors in the world,” he said.

Cheng, who has been sailing for the past 14 years, moved to Sydney to study nanotechnology at UNSW in 2010 and to access better sailing conditions.

Being part of the Elite Athlete Support Program, he also benefited from study support while competing and training overseas.

“It was great being at UNSW as they were very flexible with regards to rescheduling my classes and exams and allowing me to train and compete overseas,” said Cheng.

However, he admits that his quest for gold has not always been smooth sailing.

“It has been a long journey with plenty of twists and turns, highs and lows,” said Cheng, who has deferred his studies to focus on preparing for the London Olympics.

He recently topped the selection trials for the 2012 Laser World Championships and Skandia Sail for Gold Regatta.