Three UNSW students have been awarded cadetships funded by the NSW Government to train as problem gambling counsellors in Indigenous communities. 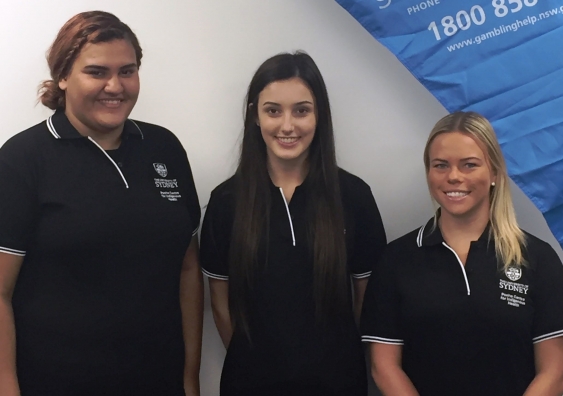 RGF, which funds programs and services that aim to reduce the harm of problem gambling, is also funding up to 60 scholarships and six traineeships over three years to 2017 to train Indigenous health and welfare workers under its Aboriginal Problem Gambling Training Program.

It is working with the Poche Centre for Indigenous Health at the University of Sydney and TAFE NSW – South Western Sydney Institute to deliver the training program.

In addition to the training, the three 20-year-old students will undertake an optional 12-week work placement at a counselling service for gamblers.

Problem gambling is more prevalent in Indigenous communities than the general Australian population, according to the State Government.

Hoskin, who is currently pursuing a double degree in Social Work and Criminology, said people close to her had been affected by problem gambling.

“I believe educating myself is the first step towards making a change and being able to provide help and education for others,” she said.

Wellings is in her third year of studies in Social Work and Criminology and Criminal Justice and is passionate about closing the gap between Indigenous and non-Indigenous Australians in all aspects of life, but especially regarding common and widespread problems, such as gambling.

“My passion first arose through seeing how gambling and other addictions have impacted my family members and communities. One day I hope to be working in policy to address these widespread issues Indigenous Australians face daily,” she said.

Larkin, who moved from Tweed Heads to study at UNSW and is currently in her third year of a degree in Social Work and a Bachelor of Arts, said she wanted to give back to her community.

“I want to be the first person in my family to achieve university success and be a role model within my Indigenous community. As a recipient of this scholarship, I will be able to excel to my full potential.”

The Director of the Poche Centre for Indigenous Health, Kylie Gwynne, said the three UNSW students had been chosen because they were outstanding candidates who demonstrated academic success.

“Sarah, Paige and Tyarna show a deep commitment to their community and we are proud to support them,” said Gwynne.