A PhD candidate frustrated by political stalling on climate change has taken out top honours at the UNSW three-minute thesis finals for her talk on low-cost wind turbines. 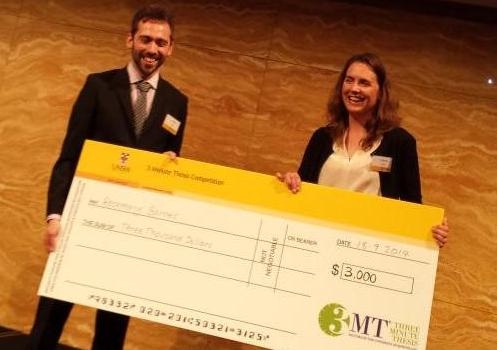 An engineering PhD student frustrated by political stalling on climate change has taken out top honours at the UNSW three-minute thesis finals for her talk on low-cost wind turbines.

Rosemary Barnes will represent UNSW at the Trans-Tasman and U21 3MT championships after her talk on practical solutions to the political stalemate on global warming wowed a panel of judges that included ABC science journalist Robyn Williams and UNSW Nura Gili Professor Martin Nakata, the first Torres Strait Islander to receive a PhD in Australia.

Barnes, from UNSW Canberra’s School of Engineering and Information Technology, took home a $3,000 prize and will travel to Perth for the Australia and New Zealand finals on 3 November.

Her thesis focuses on using low-cost materials and hollow shaft designs to make turbines more affordable, even in areas where there are low wind speeds.

“It really won’t be long before people won’t be burning coal anymore. It would be faster if the politicians got on board and if we still had a carbon tax but we’ll get there anyway,” said Barnes, who started her PhD looking for solutions to the “frustrating” climate deadlock.

“It’s a new challenge. Democracy has never had to deal with such a global long-term problem before, but we can solve it,” she said.

Runner-up Andrew Craig won $1,500 for his presentation on chlamydia vaccination for koalas. The popular talk also won the $1,000 People’s Choice award and $500 ASPIRE prize decided by year 10 and 11 students from Birrong Boys, Birrong Girls and Holroyd High schools in the audience.

“Every year I think it can’t get any better and it does,” she said of the 20 “incredibly impressive” talks on topics ranging from tax evasion and obesity to digital evolution and cancer.

“With a PhD you’re going to have to write 100,000 words, it’s going to take you four years and then you have to encapsulate it in three minutes. That’s very, very hard,” Professor Poole-Warren said of the 3MT format. “The standard was so high, I’m glad I wasn’t a judge.”

In the end only one or two points separated what the ABC’s Robyn Williams described as “star performances”.

“I’m looking at the future and however dismal the news might be today, you are making it a bright future,” he told the contestants.

Three minutes to change the world

Discover the future in three minutes

Three minutes to change the world