A student-designed "DNA origami" nanostructure that can deliver drugs to cancer cells more efficiently and effectively has taken out the grand prize at Harvard University’s annual biomolecular design competition. 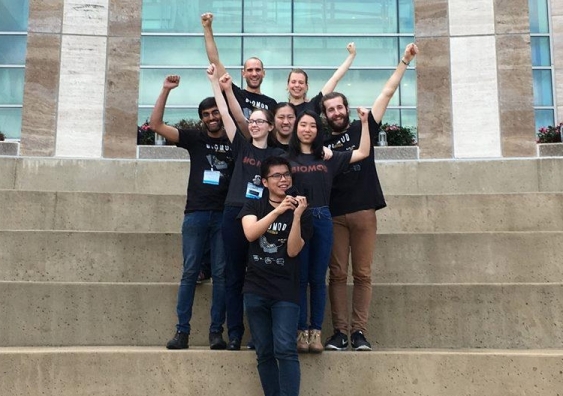 A group of UNSW undergraduate students has defeated 24 teams from around the world to take out the top gong at Harvard University’s annual biomolecular design competition, BIOMOD.

The structures have the potential for more targeted drug delivery to cancer cells to reduce harmful side effects and treatments such as chemotherapy.

The team, the only entrant from Australia and the Southern Hemisphere, also took out four other awards at the competition. They placed first for their project website, presentation and YouTube video and third in the audience choice award.

A group of UNSW undergraduate students has defeated 24 teams from around the world to take out the top gong at Harvard University’s annual biomolecular design competition, BIOMOD.

UNSW has had a respectable strike rate over the three years it has entered BIOMOD, taking out the Grand Prize in 2014 and placing in the Gold Category last year.

The team was mentored by Dr Lawrence Lee from UNSW's School of Medical Sciences, along with several of his PhD and honours students from the UNSW EMBL Node for Single Molecule Sciences.

“Every year these talented undergraduate students are invariably surprised by the enormous amount of work required to undertake a truly innovative research project, and the intensity required to do so in a very short time frame,” said Dr Lee, who is based at the EMBL Node for Single Molecule Science.

“For them to perform so well in these circumstances while juggling their full-time university commitments is a testament to the calibre of students at UNSW. Hopefully we can continue to inspire the best and brightest through these kinds of initiatives.”

Targeted drug delivery can be broken down into three steps:

The first step is the hardest to conquer and the one that Team Tiny Trap focused on for the BIOMOD competition.

Scientists have already designed vessels that can be loaded with molecular drugs to target specific cells and open where they are needed. However, they all rely on attaching the drug to the inside of the vessel – an incredibly difficult process likened to "catching a moth in a matchbox" without the luxury of being able to control when the box opens and closes.

To solve this problem, Team Tiny Trap designed an origami structure that folds strands of DNA into different shapes that can automatically capture molecular cargos using a spring-loaded mechanism like a mouse-trap.

The work not only makes the drug loading and delivery process more efficient, it also provides valuable insight into the mechanical capabilities of spring-loaded nanostructures.

Watch the video to see the system in action.

See a full list of winners from this year’s competition here.

Talking about a (renewable) revolution