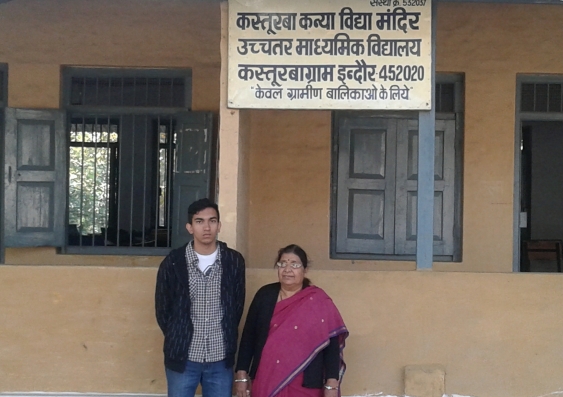 It might not be the most glamorous aid project, but a toilet block funded by a team of UNSW Medicine students is improving the lives of students at a rural Indian girls' school.

The $18,000 block of 12 toilets was completed in early July for the use of 250 girls, most of them from nearby rural and tribal areas, who attend the Kanya Vidya Mandir school.

Construction was funded by the Medical Students’ Aid Project (MSAP), a team of UNSW Medicine students committed to improving global healthcare at the grass roots level, in response to Indian government campaigns for better toilet practices and facilities in the country.

The UNSW students expect that as well as offering improved hygiene, the new facilities will encourage girls to attend school and lead to better female literacy.

Nearly 150 girls board at the school, an option encouraged by the school's managers to limit drop out rates and ultimately lift the country's low female literacy levels.

Over 40% of women were reported as being illiterate in the country's 2011 census, with the rate much higher in rural India. Many girls choose not to attend school because of undesirable toilet facilities.

“Around 25% of girls drop out of school because there are no appropriate toilet facilities for them,” said MSAP Treasurer and UNSW Medicine student Lokesh Sharma. “Toilets are a big issue for girls because it is much harder for them to go to the toilet out in the open compared to boys, and it becomes an even bigger issue when they hit puberty.”

Nearly 500 million people in India practice open defecation, which Prime Minister Narenda Modi is seeking to eliminate by 2019 with a number of campaigns. Lokesh saw these campaigns in December 2015 while visiting family in Indore, a city not far from the Kanya Vidya Mandir school.

“I was telling my family how MSAP had some money and was looking to fund an international project. My uncle works as a vet in the area. He heard the school needed a new toilet block and suggested I go and visit the site," Lokesh said. 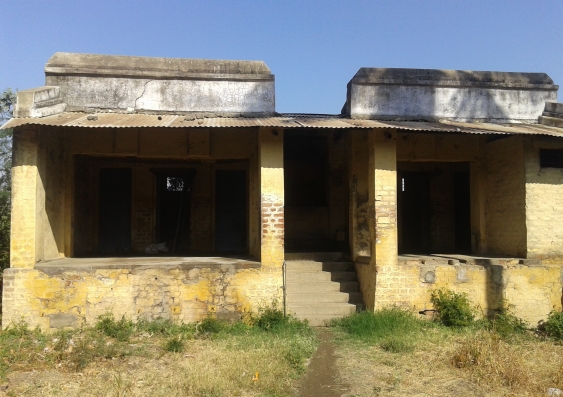 The old toilet block was run down and set some distance from the school. Photo: Supplied

When he did visit, he was confronted by a 50-year-old building in a state of disrepair. Only three of the 12 toilets were functional, doors hung from hinges and there was no hand-washing basin. The block was some distance from the boarding quarters, which meant the girls had to traipse through grass and dirt during the night – a risky prospect during monsoon season when snakes tend to shelter in grassy areas.

Lokesh, who was born in India and moved to Australia when he was five years old, spoke to school officials, who told him it would normally take them three to four years to save the money required.

He then had to convince his colleagues at MSAP: “It took a while to get everyone on board," he said. "The government campaigns helped me to convince other members that this project is supporting a much needed positive social change. We had $10,000 in mind but ended up donating almost double that because of the cost of adding rain water tanks and the hand-washing facilities, which I really pushed for.”

The new block is located between the school’s two living quarters, providing easier and safer access for the girls. Two water tanks provide water for flushing, a luxury available to only 42.5% of households in rural India. 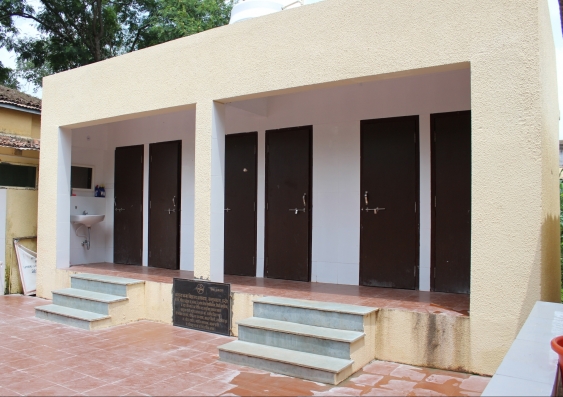 Lokesh worked in partnership with the school's managers, Kasturba Gandhi National Memorial Trust (KGNMT). Set up by Mahatma Gandhi in 1944 to empower rural and remote women, KGNMT subsidies school fees, so it is cheaper for parents to send their daughters to school than to keep them at home.

“If the girls have a proper place to stay with proper facilities, they are incentivised to go to school,” Lokesh said. “Hopefully when they are older they will take this experience with them and share it with other communities.”

Lokesh, who is in the third year of his UNSW Medicine degree, said his studies had helped him understand the importance of proper toilet facilities. 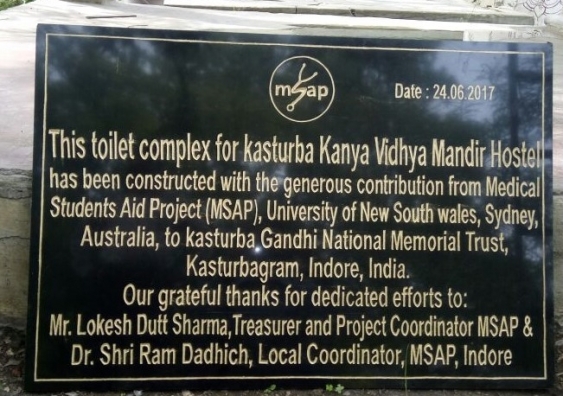 The block was built in partnership with a trust named after Gandhi's wife, Kasturba Gandhi.

“I realised the importance of sanitation to stop infectious diseases and the toilet’s role in doing that,” he said. “I'm passionate about making a positive change in the lives of others and MSAP allows me to pursue that passion.”

MSAP was founded in 2001 by two UNSW students to supply developing countries with vital medical equipment. Thanks to donations and fundraising activities, they have funded local and international humanitarian projects including a reproductive health centre in Tanzania and midday meals for school children in Gujarat, India.

MSAP is seeking donations to expand the midday meals program and for a reproductive and children’s health clinic in Yangoon, Myanmar.

To make a tax-deductible donation online, go to MSAP’s website. Donations by cheque should be made to the UNSW Foundation with PS22264 written on the back, and posted to: