Two goals in one

Making it into the Australian Olympic water polo team and completing his commerce degree are two goals Johnno Cotterill has just achieved, as he heads to London. 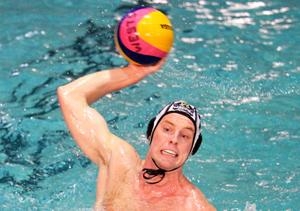 Making it into the Australian Olympic water polo team and completing his commerce degree are two goals Johnno Cotterill has just achieved, as he heads to London next week.

“It’s been a big year for me,” says Cotterill, who will train for a week with his team - the Aussie Sharks - in Hungary before heading to London.

Cotterill says he's managed to juggle both studying and his water polo ambitions due to support from the Ben Lexcen Scholarship he holds, as well as flexible study options offered by the Elite Athletes and Performers Program.

“None of this would have been possible without the support of my lecturers and the Australian School of Business, as well as UNSW Sport and Recreation. They’ve all helped me to achieve my Olympic dream,” says Cotterill, who finished his commerce degree earlier this year, after more than six years of study.

Cotterill has been playing water polo since he was 11 years old, and has travelled extensively as a result, recently competing in Kazakhstan.

It was while in Kazakhstan that Cotterill realised he had been selected for the Olympic team.

“I wasn’t really told, as such. They just kept cutting more players until I realised I was one of a few left, and that obviously I had made it into the team.”

Currently at training camp, the 13-strong team spends between six and seven hours a day in the pool, before hitting the gym and attending to their media commitments.

While winning gold is an obvious goal for the Sharks, Cotterill really wants to beat Australia’s best Olympic result to date, which is fifth.

“We want the results to speak for themselves. We want to surprise people.”

Cotterill will also be travelling to London with his girlfriend, who is in the Australian women’s water polo team.

“I really want to beat the women’s team. I don’t want to come home without a medal if she has one!”

The Sharks’ first game will be against Italy, on Day 2 of the games.

Shooting for the stars

Success in sport and study