UNSW’s women’s AFL team, the UNSW-Eastern Suburbs Stingrays, will head to the grand final this weekend hoping to bring home the premiership for the first time. 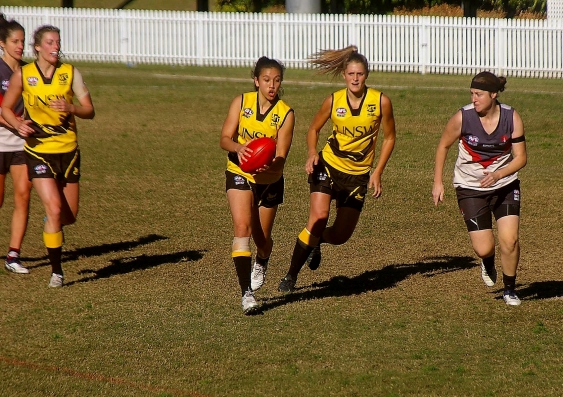 UNSW’s women’s AFL team, the UNSW-Eastern Suburbs Stingrays, will head to the grand final against Sydney Uni this weekend hoping to bring home the premiership.

The Stingrays have been competing in Sydney Women’s AFL since 2000, and made the grand final in 2014, but are yet to claim the Sydney Women's League trophy.

“The girls and I are very excited, and we are feeling confident we can get the win if we play well,” says team member Rebecca Beeson.

“The team has never won a premiership, it would mean so much to the club if we were able to win this year,” she says.

Beeson has been playing AFL for eight years and this is her second season with the UNSW-ES team.

Women’s AFL is going from strength to strength, with the introduction of a national AFL women’s league next year, and Beeson is hoping to be in the draft for the national league.

And the league is off to a good start with a recent exhibition match between the Western Bulldogs and Melbourne Demons drawing a crowd of more than 6,000 fans as well as bumper TV ratings.

“The establishment of the National Women's League in 2017 is very exciting and groundbreaking not just for women in AFL, but women in all sports.

“Growing up, it has always been my dream to play for an AFL club and knowing that I may get the chance to do this next year is thrilling.”

Beeson is currently studying a combined degree in Commerce and Media at UNSW and says she hopes to one day combine her love of football and media and find employment with a sports broadcasting company.

“My dream job would be to be employed by an AFL club in a public relations role,” she says.

“It feels like all the hard work we have put in for over nine months has finally paid off,” says Banuelos.

“I think our team this year is in the best place both mentally and physically to win the flag compared to previous years,” she says.

Banuelos has been playing AFL for three years, and this is her second season with the UNSW-ES AFL team.

“I began playing AFL after watching a few Sydney Swans games on TV and thought it looked like fun. I grew up playing soccer and Touch footy and fell in love with AFL because it’s a combination of the two.  AFL is a game that requires so many skills – kicking, catching, tackling and running,” she says.

She completed her rural medical placement in Coffs Harbour last year, which meant taking a year off from AFL.

“I had great learning experiences and clinical exposure, but there was no women’s AFL team, which made me miss it and I enjoyed the chance to play again this year.”

“Training and playing AFL or any sport is a great break from study and an opportunity to have a varied group of friends and social opportunities,” she says.

Banuelos is currently completing a research project into treatments for epilepsy in children, which she says is sometimes challenging but interesting.

“I imagined being a doctor as the perfect career to combine interacting with all different people, learning incredible things, travelling to new places and doing something valuable for society at the same time,” she says. 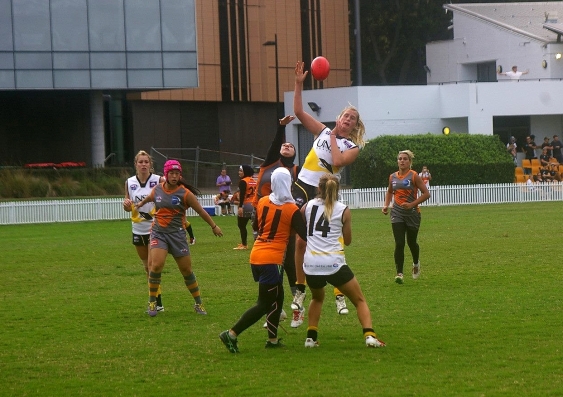 Ingrid Nielsen going up for the mark and Maddy Collier in the foreground. Photo: Supplied.

To reach the final, the Stingrays had to battle it out against Sydney Uni in the semi in a nail-biting game that saw UNSW-ES win by a single point.

“Scores were tied up at 23 all with the final siren looming, but with barely a minute on the clock the Stingrays sneaked through a point to clinch the win,” she says.

The Stingrays will again play Sydney Uni in the grand final so the team are hoping to repeat their performance and bring home the trophy on Saturday.

If you would like to cheer on the team head to Blacktown International Sports park on Saturday 10 September at 3.15pm.

If you are interested in playing AFL visit the UNSW-ES Stingrays website or watch out for the UNSW AFL tent at orientation week where you can chat to some of the players.