UNSW alumnus to represent Australia at Obama summit in Malaysia

Tim Middlemiss is one of only 200 emerging leaders from across the Asia Pacific to have been selected for the Obama Foundation Leaders Program. 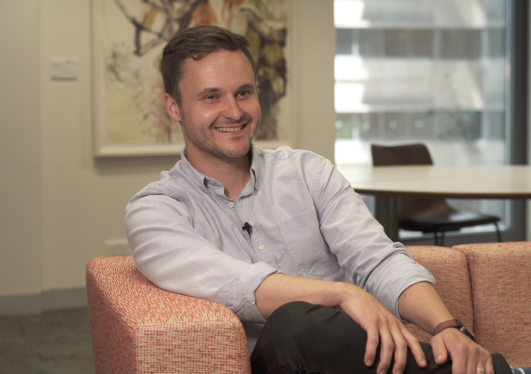 UNSW alumnus Tim Middlemiss says the main question he wants to ask former US president Barack Obama, is if he has any tips on how to raise a “fearless daughter”.

“There will be time to ask big questions about leadership and community building, but I also want to know how he walked the walk as a dad away from the spotlight,” the father-of-one and advisor to former World Vision CEO Tim Costello says.

Mr Middlemiss is one of only 200 emerging leaders from across 33 nations and territories in the region who have been handpicked to join the Obama Foundation Leaders Program: Asia-Pacific 2019, which begins with a five-day summit being held in Kuala Lumpur from December 10.

It is the second ever Obama Foundation Leaders’ summit. The first was in Africa last year where, although their attendance is not expected in Malaysia for 2019, the Duke and Duchess of Sussex, Harry and Meghan, met with some of Obama’s invitees in Cape Town.

This year’s group will learn from global leaders, and talk and trade secrets in skill-building workshops, leadership development training sessions, seminars and a community service project, among other activities.

It’s all geared towards building local leaders in their own regions from the grassroots level up, Mr Obama said in Hawai’i earlier in 2019.

Mr Middlemiss says he hopes to return from the Obama Foundation summit with enough know-how to help grow communities in Australia that are more cohesive, inviting, neighbourly and friendlier places.

He says he is also looking forward to learning from other young leaders in countries where they’re doing great work, even with fewer resources.

Mr Middlemiss cites examples such as community-building projects in Cambodia where people have lived through significant intergenerational trauma. And the anti-trafficking movement in the Philippines, despite the huge inequality among their population of about 105 million people.

“I love the idea of the world coming closer together and learning from one and another,” he says.

The 200 attendees will continue their training throughout 2020, logging in online to monthly webinars and seminars in what Mr Middlemiss calls “mini-summits” to “help cement” what they learn in Kuala Lumpur.

“I am really excited that it’s not just a flash-in-the-pan one-off meet up, but a sustained community,” he says.

While with World Vision, Mr Middlemiss cites working as part of the team that constructed the #KidsOffNauru campaign as being a career highlight.

“I look back with a lot of pride of what the team achieved because the hundred or so kids that were trapped on Nauru (off-shore detention camp) are in the process of being resettled,” he says.

“I’ve got a young child, I can’t imagine what it’d be like for her to have spent the first two years of her life locked up, having done nothing wrong”.

During his year studying towards a Master of Journalism & Communication at UNSW in 2010, Mr Middlemiss often credits his teacher Emily Booker as being a source of great inspiration.

“She often said 'you’ve got to get out of your bubble and look at things from other people’s points of view',” he says. “And the second thing is, work as hard as you can to make your story interesting.”

During his studies, Mr Middlemiss taught at Taronga Conservation Society but it was while touring schools in NSW and the ACT on speaking engagements for World Vision that he realised he wanted to advocate for social change on a bigger scale.

So after university he and a few mates teamed up to form the consultancy company Agency later counting the United Nations, Red Cross, World Vision and the Cancer Council among those whose campaigns they helped create.

So, how did the Sydney-based UNSW alumnus and socially aware father-of-one find out that he was going to the Obama Foundation Leaders Asia Pacific summit?

“I was sitting in a caravan park in Western Australia in my boardshorts watching my kid trying to play mini-golf,” he says.

“Then a congratulations email came through on my phone and I nearly spat my beer across the mini-golf course.”

“But,” he says with a thoughtful pause, “I think what I will enjoy the most, is being a part of teams of people who just want to believe that they can make the world a more gentle, friendlier place”.