UNSW’s University Preparation Program was a stepping stone to a new sense of purpose for Liam Connolly O'Donnell. 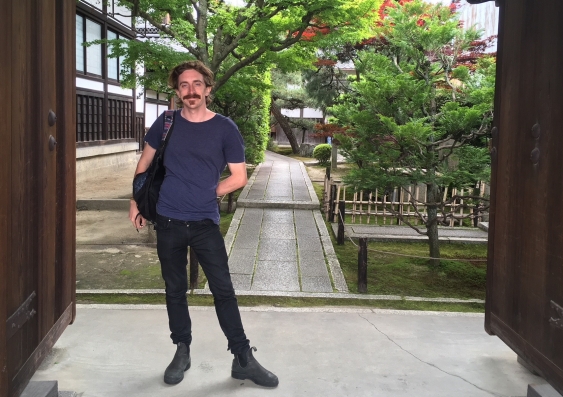 Liam Connolly O'Donnell, winner of the Australia-Japan Society award at the Faculty of Arts and Social Sciences awards on Monday. Photo: supplied

Receiving the Australia-Japan Society Award in absentia at the UNSW Faculty of Arts & Social Sciences awards ceremony on Monday is another welcome addition to a series of gratifying events for Liam Connolly O’Donnell.

Just months after donating a kidney to his younger brother Clem in July 2017, Liam went on to win third prize in the Open Division of the 48th Japanese Speech Contest. He is now studying Japanese at Doshisha University in Kyoto for a year, which is quite a journey for someone who entered UNSW via an alternative pathway for mature age students.

Undoubtedly the most significant and personal opportunity for Liam was donating the kidney to Clem, who he describes as “a gun”.

“Clem has been dealing with the reality of kidney disease since he was three. And through all that he’s been one of the most warm, fair-minded, and vibrant people I’ve ever known.

“I can’t tell you how much I love and admire my little brother. I don’t even feel like it was a decision [to donate a kidney]. Give up a small part of my own finite self so that my brother could have a chance at a healthy life – for me, there’s nothing to weigh up there.”

Clem is also studying – at ANU – and so the kidney transplant was scheduled for the mid-year break. Liam recognises that he had the “easy job” compared to Clem and that his physical recovery was relatively fast. Nevertheless, he suffered a bout of anxiety when he was discharged from hospital.

“Getting back into uni actually really helped,” he says. “It gave me something to focus on. I was a bit hesitant to take part in the speech contest initially, but I’m glad I did – and my teachers were very supportive.”

Liam describes his teenage years as “a bit all over the place” and, after dropping out of school, he was grateful for the opportunity to re-engage with study via UNSW’s University Preparation Program (UPP).

“Sometime during my 20th year I came to the realisation that I needed to change if I wanted to get my life going in any kind of meaningful direction. So, when my step-mum Annette happened upon the UPP, I was feeling pretty galvanised to try new things, and I jumped on it.

“I think it’s a fantastic concept. I felt very supported, by my family and also by the UPP teachers and my fellow students. Lots of them had already enjoyed long and successful careers but wanted to try other things. There was a bunch like me who had dropped out of school and were looking for a way to get back into study.”

Like many of his generation, Liam has been influenced by Japanese culture and stories about Japan, everything from Kurosawa to James Clavell’s Shogun. While on a working holiday to Japan, he realised how rewarding it was to study languages, and when he returned, Japanese seemed like a natural choice as a major.

“I’m thrilled to be receiving the award,” Liam says. “But, honestly, the better I get at Japanese, the more I realise how much I don’t know. There’s just so much to learn.”

Find out more about the University Preparation Program from UNSW Future Students.

Find out more about organ donation at DonateLife.

Australia’s universities are on unceded land. Here’s how they must reconcile with First Nations people