The bittersweet bliss of first love is the subject of Krystal Sutherland’s debut novel, to be published in more than 20 countries, with a film to follow. 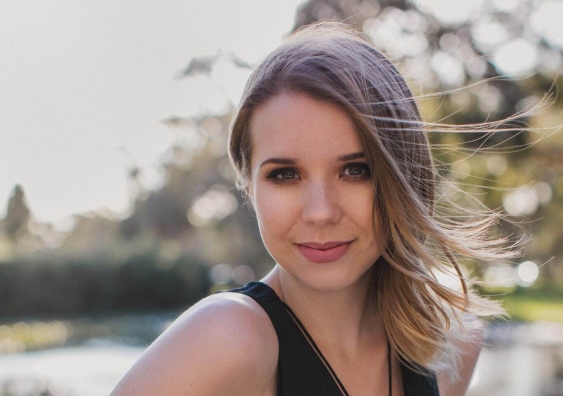 The bittersweet bliss of first love is the subject of UNSW arts student Krystal Sutherland’s debut novel, which will be published in more than 20 countries, with a film to follow.

Sutherland completed ‘Our Chemical Hearts’, pitched it internationally and sold the rights to a US film company, all while still at uni.

“My agent sent it to about a dozen editors in New York and luckily we got interest right away. You dream about this but to actually have it happen, it is crazy,” Sutherland says of the book, which is aimed at a teen audience.

The 26-year-old, who grew up in Townsville, says her love of literature was cemented when her family forbade her from reading Harry Potter due to their religious beliefs.

“I considered that a great injustice and, curious as to what all the fuss was about, I decided to take matters into my own hands,” she says.

“I wasn't old enough to get my own library card, so, like ‘The Book Thief’ I smuggled a copy out of the local library. Naturally, I fell in love.”

After finishing school Sutherland headed to Sydney, initially with thoughts of becoming an actress, and says she started writing purely as a “get rich quick” scheme.

“Probably the worst get rich quick scheme of all time, but I was 18 and I thought – JK Rowling makes a fair bit of money, how hard can it be?”

While it didn’t quite turn out to be the instant money-spinner she had hoped – it took eight years before she got her book deal – she did discover a love of writing.

“I fell in love with creating worlds and characters and I haven’t looked back since,” she says.

I think everyone has a starry eyed notion of what love is going to be like.

With her new goal of becoming a published author, Sutherland enrolled in a Bachelor of Arts at UNSW majoring in English Literature and Film.

“I wanted to learn about the history of books and writing as well as practical skills from creative writing courses. I’m also a massive film buff, so film was a natural choice in terms of learning how to tell stories,” she says.

As well as studying full-time, Sutherland edited UNSW’s Blitz Magazine (one of her protagonists is a student newspaper editor), interned at Bloomsbury publishers, and worked casually while she wrote ‘Our Chemical Hearts’.

“I look back on the year I wrote the book and I literally have no idea how I managed to write it,” she says.

Sutherland completed a student exchange program in Amsterdam on a UNSW scholarship as part of her degree and was awarded a prestigious $10,000 Westpac Bicentennial Foundation Asian Exchange Scholarship to study in Hong Kong.

“Probably the best part of my degree was studying abroad and meeting incredible people and becoming a more rounded person,” she says.

“I was writing my second novel while in Hong Kong and it's partly set in Asia, so having financial support to be able to both travel and live in Asia while researching and writing was invaluable,” she says.

It was while she was in Amsterdam that Sutherland first signed with her literary agent and then with Penguin Random House.

“We did the big US deal and that really led the way for a lot of the other deals to happen. It was a domino effect,” she says.

Given Sutherland’s love of film, getting the movie deal in the US with Awesomeness Films was icing on the cake.

“It’s really, really exciting. Awesomeness is very dedicated to the teen audience. I had a meeting with the studio recently in LA and the wheels are definitely turning.”

Now, with the Sydney book launch around the corner, Sutherland says she is really excited but also “slightly terrified”.

“You hope it sells well and you hope it resonates with people.”

She probably doesn’t need to worry. The reviews have been positive and the contradictions between the expectation of love and its reality is a story familiar to many.

“I think everyone has a starry eyed notion of what love is going to be like. And then when it happens for the first time it is actually more of a visceral thing. It hurts, and it sucks when it doesn’t work out, but that doesn’t necessarily mean that that relationship wasn’t worth anything.

“You need to have those heart breaks to truly appreciate a great relationship when you find one,” she says.

Sutherland has now handed in the draft of her next novel to her editors and agents, and says she is getting some good feedback. She’s also hoping to finish her last English Literature subject so she can graduate.

‘Our Chemical Hearts’ is published by Penguin. Krystal Sutherland will be speaking with fellow young adult fiction author Will Kostakis at Kinokuniya on Saturday 1 October at 2pm. Click here for details.