UNSW student Ned Hanigan is relishing being part of the Wallabies' spring tour to Japan and the UK less than a week after being named Rookie of the Year at the Rugby Australia Awards. 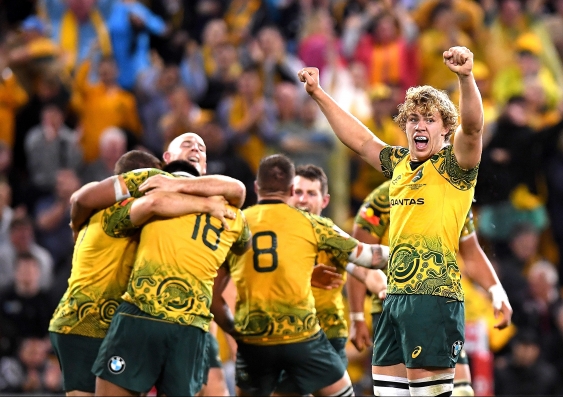 Ned Hanigan can't wait to play on hallowed turf and see some of the world's great cities as part of the Wallabies tour squad.

Hanigan, a UNSW Science student, departed Sydney on Tuesday night on his first tour with the national squad. Hanigan has been selected to play in the Wallabies' first match against Japan in Yokohama on Saturday. Then the squad heads to Cardiff for an outing against Wales before matches against England and Scotland.

The lock's inclusion in the squad follows an outstanding year in which he made his debut with the Wallabies in June and was named Rookie of the Year at the Rugby Australia Awards last week.

"We will be playing on grounds with incredible histories – Twickenham, Millennium Stadium in Cardiff – the history of these places is phenomenal," he says. "So many years, so many games of rugby. There is also a great vibe in the cities when a game is on in town. It will be an experience I will remember for a long time.

"Edinburgh is an amazing city and the Scots left with a win over us earlier this year. I’m also keen to play in Tokyo in the stadium where World Cup will be played in 2019.

"I’m excited about seeing places like Tokyo, Wales and England and bringing our style of footy to them while they bring theirs to us."

After the tour, Hanigan plans to continue his studies in physiology and psychology at UNSW.

"I have always been interested in the human body – what we know about it already and exploring what we don’t know about it yet. I am fascinated by how and why things happen within the body," he says. 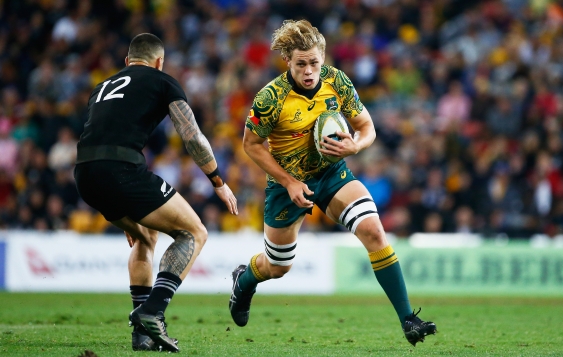 Ned Halligan (right) in action against the All Blacks. Photo: Getty Images

Hanigan admits that university study can be difficult when you are involved in elite sport that can take you "anywhere from Hamilton to Argentina to play Super Rugby", and says it is vital to be organised and focused.

He also acknowledges the support he has received as a Randwick Rugby/St Hillier's Sports Scholarship holder at UNSW.

"The staff in the Elite Athlete Program at UNSW are always very helpful and my two years of living on campus in Goldstein College were great – you could get from training to the classroom in 15 minutes."

After the Wallabies' drought-breaking win against the All Blacks in Brisbane, Hanigan has high hopes for the tour but is taking nothing for granted.

"Everything came together for the team post June training and we are all working together. We are trying to build a consistent performance to work at the very top," he says.

"All of our games are important. You’re only as good as your last result. No one is being content with mediocrity."