Solange Cunin is making space history thanks to her innovative start-up Quberider and hundreds of high schoolers who are designing experiments to be tested by NASA astronauts. 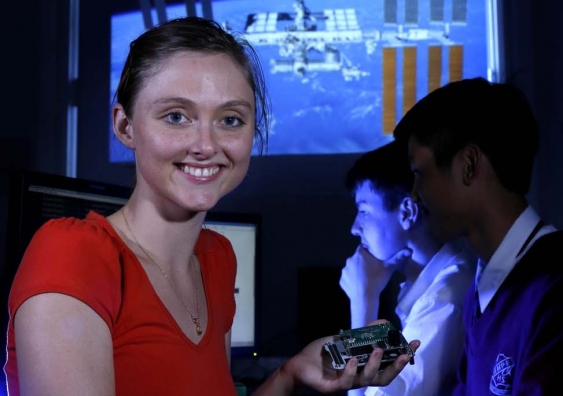 Australia’s space industry is making a giant leap into the 21st century thanks to starry-eyed high schoolers and an innovative start-up called Quberider, co-founded by UNSW student and space entrepreneur Solange Cunin.

Quberider is a STEM education company and ride-sharing service to space. It currently operates out of Telstra-backed accelerator program muru-D in Sydney and will send the first Australian-owned experiment to the International Space Station (ISS) this June.

The small payload, about the size of a large coffee mug, will launch aboard the SpaceX Falcon 9 rocket from Cape Canaveral, Florida. It will include dozens of “data-driven” software experiments developed by close to 1000 students from 40 high schools across New South Wales.

We want to give students a unique experience and help them engage more meaningfully with STEM subjects.

“This is the first Australian-owned payload to go to the International Space Station. It’s a monumental achievement for Australia and it’s being made by a bunch of 14-year-olds,” says Cunin, a fifth-year aerospace engineering and maths student at UNSW, who co-founded Quberider in early 2015 with UTS student Sebastian Chaoui.

“We were very fortunate to be supported by UNSW’s Michael Crouch Innovation Centre (MCIC) at the start of our journey,” says Cunin. “It got us out of our living rooms and gave us access to advice and mentorship from the get go. We are still involved with the MCIC and the head of the centre, Brad Furber, continues to be a great mentor and adviser to us."

Through the Quberider Space Program, schools receive specialised content aimed at year nine and 10 classes, satellite hardware kits with sensors that students can use to design experiments, and the chance to lift-off and have NASA astronauts test those experiments in space.

“When these mini rocket scientists watch the launch they can honestly say they own a part of it – they were a part of that mission,” says Cunin.

"We want to give students a unique experience and help them engage more meaningfully with STEM subjects. Giving a student a space mission is probably the best way to do that.

“The students are learning how to program, how to do big data analytics, think critically and design creative solutions. These are 21st century skills major industries are demanding, but haven’t really been incorporated into the school curriculum yet,” says Cunin.

And it’s not just the school kids who are excited: “I’m like the biggest kid of the whole program. Having a space mission is something I’ve always wanted.”

Students have developed a range of experiments that will be able to measure the radiation astronauts are exposed to on the ISS, gauge the change in speed or altitude during an evasive manoeuvre, or use patterns in the data to create visual or audio artworks.

Cunin says the program's students, who have given up their weekends and spare time, and teachers should be commended for their hard work and dedication: “The Quberider Space Program is brand new, and can be pretty intimidating. All the teachers that we’re in contact with have made such a big effort to give their students this opportunity. It’s been very rewarding.”

To realise the mission, Quberider teamed up with American space company DreamUp, which is powered by NanoRacks, to deliver educational experiments to the ISS. NanoRacks operates via a Space Act Agreement with NASA that allows for commercial experiments to be undertaken on the US National Lab aboard the ISS.

“DreamUp is honoured to bring Australian classrooms into space, literally,” says Carie Lemack, co-founder and CEO of DreamUp. “Our goal is to inspire and train the next generation of explorers – launching their experiments into space propels their interest in solving tough problems and reaching for the stars.”

The cost of the launch has been funded, in part, by the schools that have purchased access to the Quberider Space Program. Cunin expects the cost of future launches – and the regulatory hurdles – to become more manageable as more schools sign-up for the program.

“This is the first run of many,” she says. “We’re currently in a lot of schools in NSW. We’d like to roll the program out across the nation.”

“I would love to see every school giving their year nine students a space mission every year. That would be amazing. That’s our big dream.”

About Quberider
Quberider was founded by UNSW student Solange Cunin and UTS student Sebastian Chaoui in 2015. The company was initially conceptualised as a “ride-sharing” service to space, with the aim of helping to lower the cost of launching experiments and satellites into space. The company merged this objective with a new one: producing STEM education programs designed for high school students, and shortly after was accepted into Telstra’s muru-D accelerator program. These programs turn students into real-life rocket scientists: students learn how to code, perform big data analysis and think critically, and how to design creative solutions and experiments, which are ultimately tested in space. In 2016, Quberider will make history, sending the first Australian-owned experiment to the International Space Station.

DreamUp is the first company dedicated to bringing space to the classroom, and the classroom to space. It is creating an educational community where space-based research and space-based projects are available to all students, from primary to post-doctorate, to the International Space Station and beyond. To date, DreamUp has booked over 250 educational payloads to the International Space Station via their launch services provider, NanoRacks LLC.