The UNSW Sunswift solar car team overcame major setbacks to drive across the continent and set a world record this week. It was a determined return to form for the UNSW students. 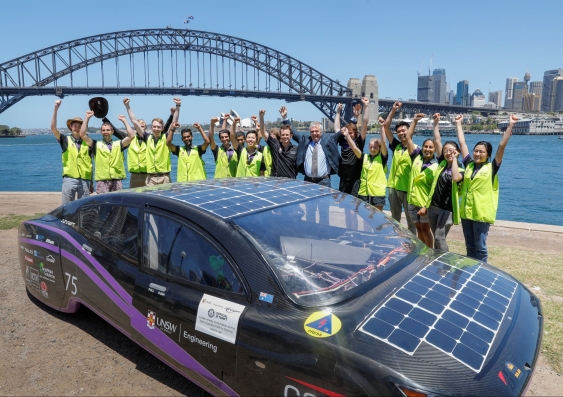 The UNSW Sunswift solar car team cruised into the record books Friday, arriving  at Sydney’s McMahon’s Point having driven from Perth to set a Guinness World Record for the lowest energy consumption while driving across Australia in an electric car.

Despite a number of setbacks over the past year, including a rear suspension failure during the 2017 Bridgestone World Solar Challenge and a battery fire in October, the team of 14 students completed the 4100km journey without a hitch and two days ahead of schedule.

“I’m so excited we made it,” said Courtney Morris, 20, a mechanical engineering student. “It’s always so nerve-wracking to see the car that you built with your own hands on the road; I’m always afraid that something could change at any moment, but it all went pretty well and the team dynamic was great.”

The car, named Violet, is the sixth-generation solar car built by Sunswift, a student-led initiative at UNSW, now in its 22nd year. To set the record, the team had to keep the car’s energy consumption to under 5.5kWh/100km. Actual energy consumption throughout the journey was an average of 3.25kWh/100km, which is about 17 times less than an average Australian car. Travelling an average of 600km a day, Violet used about the same energy per day as that of a standard household (20-24kWh). The cost to run the car from Perth to Sydney was also economical, at well under $50.

'Violet is lively on the road a lot, it’s not a production car and you have to kind of handle it like a horse in order to manage it on public roads. But we did it.'

“These students have pushed the boundaries of modern engineering and proven that solar powered cars are likely to be a big part of Australia’s motoring future,” he said.

“They worked extremely hard to prepare for this journey and despite setbacks, they’ve shown resilience, bounced back like professionals and got on with the job.  This is what a university degree should entail – actual, hands-on experience and overcoming real-world challenges. I am incredibly proud of the calibre of young adults we have studying here at UNSW. A wholehearted congratulations to every one of you.”

Driving into Sydney was the best part of the trip, according to Hayden Smith, a 25-year-old computer science honours student.

“That’s when it finally clicked that we had crossed the country in just six days – that’s 4100km. In a car built by students,” he said. “Violet is lively on the road a lot, it’s not a production car and you have to kind of handle it like a horse in order to manage it on public roads. But we did it.”

The Sunswift team will return to their families for the holidays before returning in the new year to begin preparations for the 2019 Bridgestone World Solar Challenge next October.