UNSW students, staff and alumni wanting to make a difference to sick kids have raised more than $270,000 in just three years. 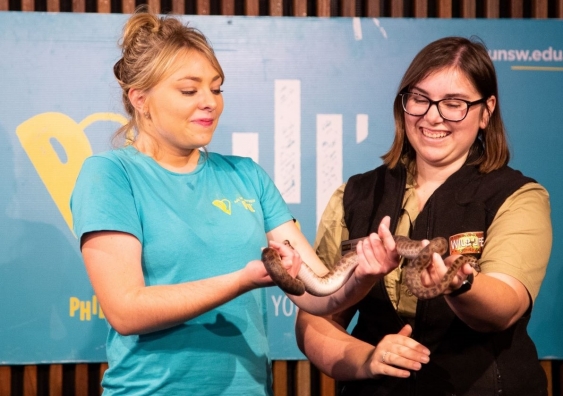 Arc organiser Courtney Cross (left) tries to ignore her fear of snakes by holding a diamond python to raise money for Phil’.

UNSW students have raised more than $270,000 for sick kids in just three years, in a philanthropic effort thought to be the biggest of its kind in Australia.

The student-led Phil’ fundraiser has tallied $160,770 for this year alone, with funds going to a program that eases children’s anxiety about being in hospital.

The annual event is organised by student not-for-profit body Arc, which wanted to unite UNSW and give back to the local community through a charity where the contribution would make a visible impact.

Since its inception in 2016, Phil’ – short for Arc Philanthropy – has raised $272,006 for the Sydney Children’s Hospital at Randwick.

The money has funded a full-time and part-time therapist in the emergency ward as part of the hospital’s Child Life and Music Therapy program, which aims to reduce kids’ anxiety around hospitalisation.

Every year, hundreds of students, staff and alumni dedicate enormous time and energy to Phil’, which involves fundraising events throughout the year, culminating in a 24-hour “Fun-A-Thon” each October.

This year’s general events included a gala ball for corporate partners, a concert showcasing talent from across UNSW and countless barbecues, bake sales and raffles.

Then, during the Fun-A-Thon on October 12, almost 300 students, staff and alumni took part in activities on the hour, every hour, for a full day.

Highlights of the 24-hour ‘finale’ included Arc CEO Shelley Valentine shaving a quarter of her hair for $300 and Arc Chair Nadhirah Daud - and several UNSW college deans – being dunked in ice-cold water for $100. 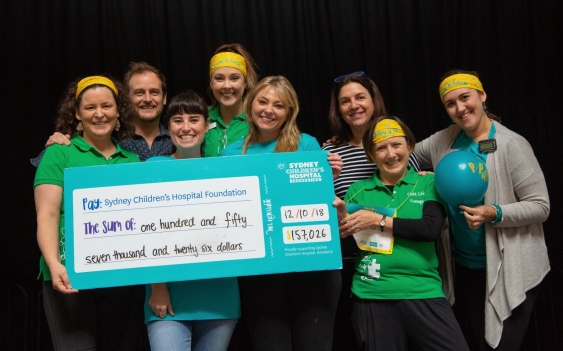 Amanda Carlon (left) and Courtney Cross, in blue T-shirts, present the cheque to Child Life and Music Therapy staff from Sydney Children’s Hospital. It shows the amount raised by the end of the Fun-A-Thon, but Arc subsequently accepted further donations, bringing the 2018 total to $160,770.

This year’s Phil’ was led by fourth-year Psychology student Courtney Cross, who says both the hospital and Arc are thrilled at the contribution.

Cross says the 2018 total comprised average donations of $2, which is exceptional given that students often struggle to make ends meet.

“It speaks volumes for the warmth and generosity of the UNSW community, and it’s also proof of our outstanding growth,” Cross says.

“When you think about how many students would skip a meal to save money, I am overwhelmed at the generosity.”

The fundraising relies on the dedication of students and staff who fit in their Phil’ tasks around often-tight study or teaching programs.

UNSW alumni also punctuate their busy lives to give time to the cause.

About 30 student volunteers are immersed a few hours every week putting the fun in fundraising.

They are led by Jeremy Ng (first-year Medicine) Kim Liu (fourth-year Commerce/Fine Arts) and Stephanie Baris (second-year Commerce/Advanced Science) who work behind the scenes organising the Phil’ activities and events.

"Plus there are our 250+ participants, who go above and beyond in the three months before the Fun-A-Thon, balancing it with uni for the whole of semester," Cross says.

Planning for 2019 Phil’ is underway. You can visit the Arc Phil’ website to register your interest in volunteering.