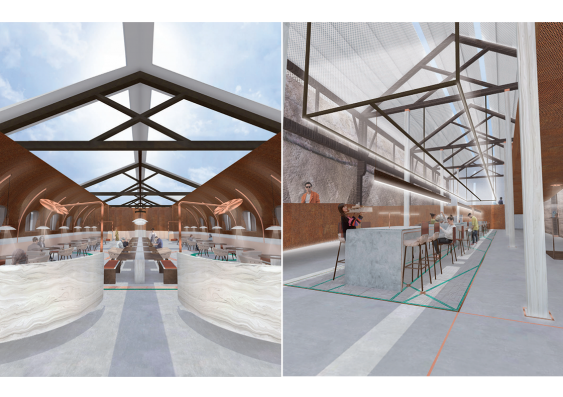 Designs for a co-working incubator, a civic centre on Sydney’s Goat Island and a retail space to creatively showcase Australian fashion designs were three stunning projects which have put UNSW Interior Architecture graduate Zarah Baitz in the national spotlight.

The Design Institute of Australia (DIA) awarded Ms Baitz the prestigious Graduate of the Year Award (GOTYA) for her three interior architecture pieces. She also won the National Interior Design Category across all DIA chapters and the award for NSW chapter category for Interior Design.

Design Institute of Australia NSW Chair Nick Karlovasitis (MDIA) praised Zarah as “one of Australia’s next generation of design visionaries” and says the Institute “can’t wait to see what she does next”.

Describing the DIA Graduate of the Year Awards as an “annual high point for the design industry”, Mr Karlovasitis added that it was a “celebration of our most exceptional emerging designers.”

This follows her also winning the UNSW University Medal in Interior Architecture (Honours), a prestigious award granted to the top student across all disciplines in the Built Environment Faculty for academic achievement and rigour.

The University Medal is one of the most distinguished awards that can be bestowed upon an undergraduate student, recognising outstanding academic performance across a Bachelor program.

Ms Baitz says that winning the awards has been extremely humbling. “Being recognised by both my university and the industry has truly confirmed to me that my passion lies in the right place,” she says.

“All of my hard work and commitment over the past four years has been extremely worthwhile.

“This recognition has enhanced my belief in my ability and my philosophy. I am incredibly grateful to UNSW and the DIA for these acknowledgements and excited for what is to come next.”

She says some of the highlights of her time at UNSW were study trips to Cambodia, Venice and Vienna. She credits the trip to Vienna on the Seidler International Study Tour, coordinated by UNSW FBE, as sparking her interest in social housing and inspiring her future career direction.

“I didn’t even know that I had an interest in social housing until the trip to Vienna, where I learned about the amazing system they have,” Ms Baitz says.

“That’s now inspired me one hundred per cent in terms of my future goals.”

In Vienna, more than 60 per cent of the population live in some form of subsidised housing. The model of social and affordable housing is diverse and includes city-owned flats and limited profit housing co-operatives. Major architects, past and present, have been involved in the design, built to encourage interaction among social classes, and promote innovation and high-quality design. 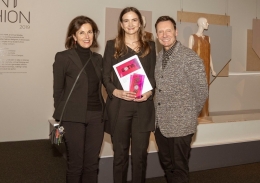 Before the trip to Vienna – which also included two weeks in Venice – Ms Baitz was selected to go on a trip to Cambodia, where UNSW partnered with the University of Fine Arts (RUFA) in Phnom Penh; and studied the street life in Phnom Penh versus the street life in Sydney. The two-week workshop examines the diverse ways people use public street space by engaging with the people, systems and spaces. The aim is to understand how inclusive, people-centred public spaces can be created and how ‘unseen’ parts of rapidly developing cities might be documented.

Ms Baitz initially heard about the Bachelor of Interior Architecture at UNSW from “a few people that had done the course”, previously not knowing there was an interior architecture-specific faculty.

“I really liked the idea of being able to combine architecture and interiors and I truly didn’t even consider any other universities.”

Ms Baitz says the Built Environment Faculty encourages interdisciplinary learning which is key in the changing nature of the workforce and current business climate.

“I came to one of the open days and saw how creative and conceptual the degree was. Not just designing buildings but designing environments,” she says.

“I’ve always been quite a creative person. I loved art at school and I also loved maths. I wanted to do something predominantly creative, but in combination with something practical. I haven't really ever wanted to do anything else. I've always wanted to design buildings, inside and out.”

For the Design Institute of Australia GOTYA, students are required to submit three projects from their time at university. Ms Baitz’s first project was to independently design a retail space within a tenancy of Burwood Westfield Shopping Centre in Sydney, featuring collections from emerging Australian fashion designers. The second project was to design a workplace for a co-working incubator for start-up tech and media companies. And thirdly, her graduation project was to design the civic centre on Sydney Harbour’s Goat Island.

Ms Baitz credits the Bachelor of Interior Architecture as giving her a great start in the industry and the “incredible teachers and lecturers, such as Lisa Zamberlan and Bruce Watson” at UNSW being instrumental to her success.

“We had such a close relationship with our teachers, and they were very open to helping you whenever you needed. It was such a great support system. And also the networking between different years of the degree, which is great," she says.

“I was a peer demonstrator, aiding tutorial classes for younger years during my time at UNSW Built Environment, which I really enjoyed. There’s constantly an exchange between people all across the degree. I appreciate how involved my teachers were; I think it's quite a rare thing to come across at university.”

Ms Baitz says although architecture courses have a reputation for being very hard and time-consuming, she believes “it doesn’t really matter if you’re doing something you love. If you have a good work ethic and determination and are passionate about it, it will ultimately result in success.”

Now doing a Master of Architecture degree, Ms Baitz has just started a new role as Student Architect with Bates Smart, a multidisciplinary design firm with offices in Sydney and Melbourne.

She says recently a lot of people have been asking her how she has done so well. “They are saying ‘you must be so incredibly clever’. And I’m not, but I think it does initially start with your own work ethic and your passion for what you’re doing. As long as you’re passionate, hardworking and have a fantastic support team, teachers, family and friends, you will enjoy it and succeed.”

How interior architecture will transform the post-pandemic world

Working from home: the end of the office as we know it?