Walking the pilgrimage in Japan

UNSW students have made a public artwork for a Japanese community struck by natural disaster, as part of an international Environment and Spirituality program run by COFA. 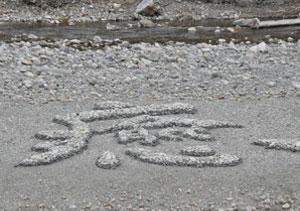 Students from UNSW have made a large public artwork in Japan for a community struck by natural disaster.

The students were part of a three-week international program run by COFA, which also involved students from Salisbury University in the United States and Wakayama University in Japan.

The group spent time in a World Heritage cultural landscape in the Kii Sacred Mountain Range in south-west Japan.

“We walked the Kumano Kodo Trail in order to understand the historical, cultural and ecological significance of pilgrimage routes and the nature–culture integration seen in this sacred area,” says senior lecturer in the School of Art, Louise Fowler-Smith, one of the teachers on the course, Environment and Spirituality: Walking the Pilgrimage.

One of the aims of the program was to learn about the spiritual cultures of Japan, especially the Shingon Esoteric Belief, Shino and Animism.

In addition, the students planted trees and constructed a large public artwork on the edge of a river in the town of Chikatsuyu, which was recently damaged by a severe typhoon.

“This was extremely well received by the local community, who said that they will preserve the artwork and have asked us to return. Our visit attracted a lot of public attention and media,” says Ms Fowler-Smith.

An exhibition of the work produced on this course will be held at the COFA Gallery (next to the main lecture hall) from April 16. A similar elective course will be offered to UNSW students next year.