Who's your favourite teacher? 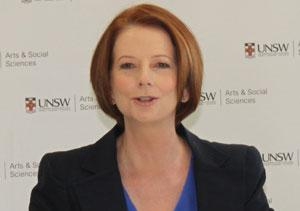 Together with School Education Minister Peter Garrett, Ms Gillard met several groups of undergraduate and postgraduate students from the Faculty of Arts and Social Sciences.

She told them the campaign would run for six weeks and current and former school students are invited to nominate their favourite teacher on the Prime Minister’s Facebook page.

Ms Gillard told the UNSW students she had benefited enormously from having great teachers at school and thanked the students for pursuing a career that wasn’t only important for the lives of the children they will be teaching, but also for the future of Australia.

“Remember, any one of the children you teach has the potential to grow up to become Prime Minister,” she laughed.

The aim of the campaign is to generate a conversation about the inspirational role that high-quality teachers play in students’ lives.

At a round table discussion with around 20 students from the School of Education, Ms Gillard and Mr Garrett heard from students who had just returned from six weeks of practical teaching in high schools across the State.

In a lively exchange the students told the Prime Minister they’d had both good and bad experiences working alongside teachers. Some of the toughest were learning how to communicate with the schoolkids.

“You feel like you are sinking as you are not getting through to them at all, and then just one kid gets it and you feel you must be doing something right,” said student Melissa Ronchetti.

Peter Garrett said when he was at school he was closest to his music teacher, and even though he went on to become the lead singer of Midnight Oil, the music teacher encouraged him to keep  up his studies and he went on to complete a law degree at UNSW.

“It’s an exciting time to be a teacher. You can make a real difference in the lives of students and I congratulate you all on choosing teaching as a career,” he said.

Mr Garrett said the government was working to get Australian schools back in the top five schooling systems in the world by 2025. “We know that great teachers are the key to getting there.”

What makes a good teacher?

Gonski’s legacy and the policy soup: does the political process matter?