Wow, this is sweet! Talk on sugar alternatives takes out 3MT competition

A talk about the molecular effects of artificial sweeteners has taken top honours at the UNSW three-minute thesis finals in a field of winners dominated by medical science. 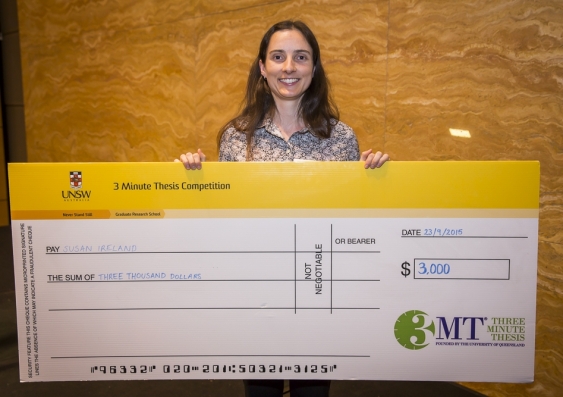 A talk about artificial sweeteners' effects on molecular health has taken top honours at the UNSW three-minute thesis finals in a field of winners dominated by medical science.

First-year PhD candidate Susan Ireland from UNSW Medicine wowed the judges with her engaging and entertaining talk on sugar alternatives and their interactions with receptors in the body which she likened to a ‘a toddler who wants more cake’.

“Wow, this is sweet!” quipped Ireland as she accepted the $3,000 cash prize and the honour of representing UNSW at the Trans-Tasman and global U21 3MT finals in Queensland.

“The young scientists understand their work better.They are putting it into language that both they and we understand.”

“The most agonising thing of all was the nano-distance between them all, at least half of them were up there with the best,” said Williams, adding that research in Australia had been “transformed” by the three-minute thesis contest.

“The young scientists understand their work better,” he said. “They are putting it into language that both they and we understand.” 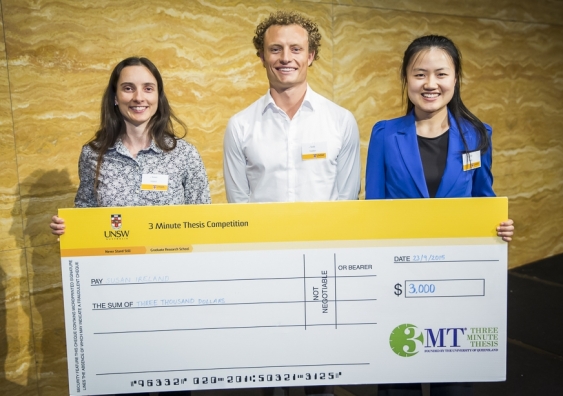 UNSW President and Vice-Chancellor Professor Ian Jacobs said the event showcased the depth and calibre of talent at UNSW and its deserved place as a world-class research university.

“This university has massive aspirations for research quality… we aim to be in the world’s top 50 universities during the next decade,” Professor Jacobs said.

“And if we’re going to do that, there are all sorts of things we need to do. But supporting and valuing and treasuring our PhD students is absolutely at the heart of our strategy.

“So it’s really important to celebrate and enjoy and to continue with events like these.”

Twenty-four PhD candidates from across the University – all finalists from their respective faculties –pitched their bite-sized research summaries this year, a record turnout.

Ireland was inspired to enter the 3MT after attending last year’s interfaculty finals and finding herself “thinking about all these topics that I had never thought about before in law, in arts, in other faculties”.

“I couldn’t have imagined last year that I would be here. To win is just incredible.”

"Sometimes research can be demoralising, sometimes experiments don’t work or our hypothesis could be completely wrong, so it helps to keep in mind the bigger picture and the importance of what we’re doing."

Though preparations took “a lot longer than three minutes” Ireland said the experience had helped her to clarify her work and to see its broader significance which was encouraging in more challenging moments.

“Sometimes research can be demoralising, sometimes experiments don’t work or our hypothesis could be completely wrong, so it helps to keep in mind the bigger picture and the importance of what we’re doing and to remember that we are moving forward.” 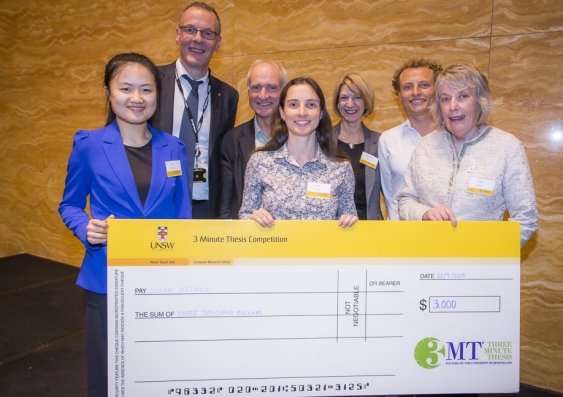 Kejia Wang (Engineering) was named runner-up by the judges for her talk on falls prevention in the elderly using tiny sensors – “the kind you find in your smartphone” – to map their gait.

It was Wang’s second consecutive year at the 3MT finals and Williams commended her clarity and poise as well as the significance of her work in awarding her the $1,500 second place prize.

Scott Youlten’s (Medicine) crowd-pleasing talk using marriage as a metaphor for bone health won both the People’s Choice ($1,000) and ASPIRE ($500) prizes, as well as a commendation from the judges.

The ASPIRE prize was decided by a group of students from Auburn Girls’ High School and Matraville Sports High School, and Youlten said he was “stoked” with the acclaim.

“Both the awards are very flattering in that it said that (the talk) was accessible to a range of people – it wasn’t just the general audience it was the school kids which is so important, particularly working in science, given that most of the people who are going to end up funding my research aren’t going to be scientists.”

Also highly commended by judge Robyn Williams was Ellen Ji (Medicine) for her talk on using an oestrogen-based drug to treat schizophrenia.