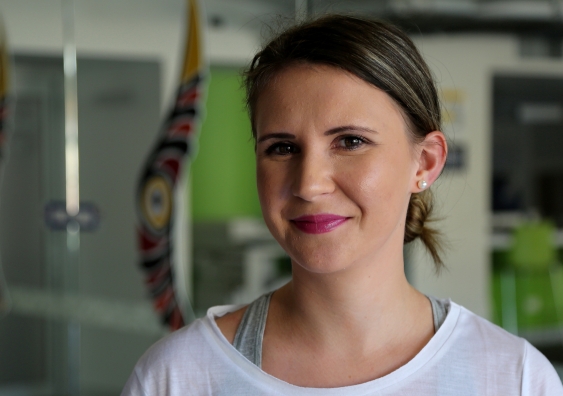 When Danielle Hobday returned home one day from a student expo with a leaflet about studying law she didn’t really think it was something she would pursue. But her father had other ideas.

“I remember the conversation with my dad vividly,” says the 22-year-old UNSW student.

“He said ‘Why don’t you apply and see how it goes. What have you got to lose?’”

Fast-forward a few years and a career in the criminal justice system appears certain for Hobday. She is undertaking an Australian Federal Police Cadetship, works casually as a Youth Officer with Juvenile Justice, has received a scholarship with the Australian Government Solicitor’s office, and looks set this year to complete a double degree in law and criminology.

Last week, her many efforts, including volunteering in remote communities, were recognised with an Indigenous Achievement Award at the NSW/ACT Young Achievers Awards.

Her Indigenous background – she is a Wiradjuri woman from western New South Wales – an interest in the police force, and her experience as a mother of two young children have combined to create a powerful drive to work as an advocate for young Indigenous people.

“I don’t just want to work in an office; I want to be out in communities and working with people,” says Hobday.

That desire has been strengthened by several stints working as a volunteer in remote communities in the NSW town of Wellington, at Palm Island off the North Queensland coast, and most recently in the Northern Territory as a volunteer with the National Aboriginal Sporting Chance Academy, Australia’s peak body for Indigenous sport, health and education.

Our people have been oppressed for so long and we now have a chance to do something to change that.

During that stint in 2014, Hobday stayed in the Yuelamu community, 300 km north west of Alice Springs. She spent her time helping the children at school, playing sport with them and teaching the class how to lead a healthy lifestyle.

She would love to return each year to Yuelamu to maintain her relationship with the community, especially the young people there.

More broadly, when Hobday finishes her studies she would like to keep working with young people in the criminal justice system, especially with Indigenous youth.

Hobday is hoping her double degree will broaden the career opportunities on offer. Thanks to a number of internships and scholarships, she has already gained some experience in drafting briefs for barristers, drawing up legal contracts, and understanding asylum seeker law.

She and her partner Jonathon Captain-Webb, who is an Indigenous Arts/Law student at UNSW and works part-time for the Australian Army, have a lot to juggle between work, study and looking after their children. That’s all on top of an average of four hours a day spent commuting from their home on the Central Coast.

But she says they are both driven by a desire to do something positive for their communities.

“We work really well together and we have an amazing amount of family support,” says Hobday.

“We are really motivated. Our people have been oppressed for so long and we now have a chance to do something to change that.

“I think being a good role model for our children also motivates us.”

How to fix Australia’s education system, one of the most unequal in the OECD