If Australia is serious about buying the jump jet version of the Joint Strike Fighter it would be wise to look at why the UK is the only country to change its mind on the sale, writes Steven L Jones. 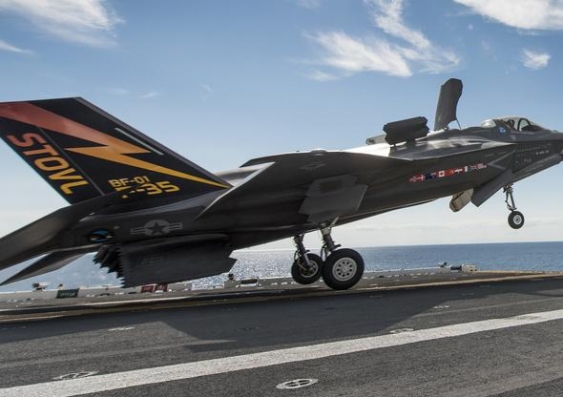 OPINION: If Australia is serious about buying the jump jet version of the Joint Strike Fighter it would be wise to look at why the UK is the only country to change its mind on which version of the aircraft to buy.

In 2010, the British government decided against buying the F-35B jump jet as previously planned because of the limitations of the aircraft. It later changed its mind as the costs converting the aircraft carrier for the F-35C carrier variant were too expensive.

In the lead up to a new Australian Defence White Paper and Force Structure Review, Prime Minister Tony Abbott this year ordered Defence to assess the benefits of F-35B jump jets and converting the Canberra class Landing Helicopter Docks (LHD) to accommodate them.

Previously, the RAAF was committed to buying only the F-35A version of the Joint Strike Fighter.

Change can be costly

While the British example is not directly comparable to Australia’s potential decision, it offers a warning on the costs and risks of changing plans and hasty policy decision making.

Additionally, the reasons behind the UK’s 2010 decision to buy the F-35C instead of the F-35B provides some insights on the limitations of the F-35B short take-off and vertical landing (STOVL) aircraft.

The UK’s 2010 Strategic Defence and Security Review said its Queen Elizabeth class aircraft carriers would provide it with the long term political flexibility to act without the need to depend on other countries to use of their bases. They also provided options for a response to crises as a “complement or alternative” to ground engagements.

A key element of this capability is the fixed wing aircraft (as opposed to helicopters) which would fly from these carriers.

The first of plan in the UK

While the UK had originally signed on the JSF project to buy F-35B jump-jet fighters to replace their Harriers, the 2010 Review announced the decision to buy the F-35C naval carrier variant instead.

The reason given for the change in policy was that the F-35C carrier variant has a “longer range and greater payload” which was the critical requirement for precision strike operations in the future. The carrier-variant was also cheaper, reducing through-life costs by “around 25%”.

The savings would result from a cheaper acquisition cost, as well as the efficiencies from maintaining only one type of aircraft, instead of two versions.

A US Department of Defense report on the F-35 states that the estimated basic costs per aircraft (the airframe, engines and avionics) are:

Concerns about the jump jet

In 2012 Britain’s The Telegraph newspaper reported it had seen a highly classified Operational Analysis Supporting Paper which indicated that “planners have grave doubts about the capabilities of the jump jets”.

According to the newspaper, the conventional variant was “more effective than the jump jet in almost all cases”. For potential missions the British military may have to conduct, the document stated that the F-35B was less useful that the other variants.

The key issue identified was that the F-35B STOVL version carried less fuel than other the other versions, reducing weapons payloads and reducing the amount of time the aircraft could spend over a target area.

For a target 300 nautical miles away from the aircraft carrier, the jump jet can spend only 20 minutes over its target before turning back, compared with 80 minutes for the conventional jet.

In 2010, there were also concerns that with the development of the F-35B and the possibility that the STOVL version could be cancelled. This influenced the British decision to acquire a different version of the F-35.

In January 2011 the then US Defense Secretary Robert Gates put the F-35B on a two-year probation, saying that:

If we cannot fix this variant during this time frame and get it back on track in terms of performance, cost and schedule, then I believe it should be cancelled.

But twelve months later the new Defense Secretary Leon Panetta lifted the probation on the F-35B variant citing efforts that had been made to bring the STOVL aircraft up to the standards of the other two variants.

A change of plan again in the UK

In May 2012 the UK’s Defence Secretary Philip Hammond announced a U-turn on the 2010 decision, changing policy back to buying the F-35B jump jet fighters and cancelling modifications to the ship. He argued:

When the facts change, the responsible thing to do is to examine the decision made and be willing to change, however inconvenient that may be.

The problem was that the estimated cost of converting the carrier HMS Prince of Wales for the F-35C carrier version had blown out from £950 million to £2 billion “with no guarantee that it will not rise further”.

The UK government already had spent between £40 million and £50 million on design and assessment work for modifying the carrier.

In January 2013, the House of Commons Defence Committee provided a scathing assessment of the “rushed and flawed decision” of 2010. The Defence Acquisition report stated the decision to choose a different aircraft and modify the ship was:

[…] based upon incomplete and inaccurate policy development [and] was taken without the MoD [Ministry of Defence] understanding how the change could be implemented.

The challenge for Australia

While converting the Royal Australian Navy’s LHDs would not be anywhere near as expensive as it was for the British carrier, it would certainly be an expensive exercise.

While the Canberra class LHDs retain the ski jump for STOVL aircraft, the decision to keep them was based on the evaluation that it was cheaper than removing them.

Otherwise, the infrastructure necessary to support aircraft, such as fuel lines and storage, had deliberately not been incorporated as it would have added unnecessary costs to support a capability that they were not intended to have.

In Senate Estimates hearings recently, senior Defence officials admitted that little work had so far been done on the possibility of buying a STOVL variant.

They said a “fairly superficial examination” had been done up until now because there had not been a “serious consideration” of the aircraft flying from the LHDs.

Chief of the Defence Force General David Hurley noted that Defence was in a situation with a new government and a prime minister with a view about a particular capability.

As well as requiring an assessment of the option of acquiring the F-35B and converting the LHDs, the issue raises questions about Australian defence planning and policy broadly.

There are still questions to be asked as to how appropriate were the previous decisions regarding the LHDs and F-35As, and to what extent is Defence flexible enough to change policies with changes in the Australia’s strategic environment.

Alternatively, there are questions as to how independent is defence policy and planning from politics, and to what extent is Defence able to make long term decisions without political interference.

Lastly, assuming the Australian Defence Force had not previously given the suggested capability “serious consideration”, who has the Prime Minister’s ear on strategic and defence policy?

Steven L. Jones is a PhD candidate at UNSW.

This opinion piece was originally published in The Conversation.