A research team led by Australian engineers has created the first working quantum bit based on a single atom in silicon, opening the way to ultra-powerful quantum computers of the future. 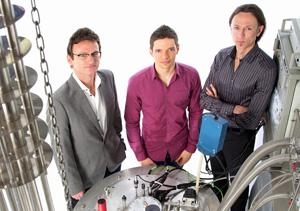 A research team led by Australian engineers has created the first working quantum bit based on a single atom in silicon, opening the way to ultra-powerful quantum computers of the future.

In a landmark paper published today in the journal Nature, the team describes how it was able to both read and write information using the spin, or magnetic orientation, of an electron bound to a single phosphorus atom embedded in a silicon chip.

“For the first time, we have demonstrated the ability to represent and manipulate data on the spin to form a quantum bit, or ‘qubit’, the basic unit of data for a quantum computer,” says Scientia Professor Andrew Dzurak. “This really is the key advance towards realising a silicon quantum computer based on single atoms.”

Dr Andrea Morello and Professor Dzurak from the UNSW School of Electrical Engineering and Telecommunications led the team, which includes researchers from the University of Melbourne and University College, London.

“This is a remarkable scientific achievement – governing nature at its most fundamental level – and has profound implications for quantum computing,” says Dzurak.

Dr Morello says that quantum computers promise to solve complex problems that are currently impossible on even the world’s largest supercomputers: “These include data-intensive problems, such as cracking modern encryption codes, searching databases, and modelling biological molecules and drugs.”

The new finding follows a 2010 study also published in Nature, in which the same UNSW group demonstrated the ability to read the state of an electron’s spin. Discovering how to write the spin state now completes the two-stage process required to operate a quantum bit.

The new result was achieved by using a microwave field to gain unprecedented control over an electron bound to a single phosphorous atom, which was implanted next to a specially-designed silicon transistor. Professor David Jamieson, of the University of Melbourne’s School of Physics, led the team that precisely implanted the phosphorous atom into the silicon device.

UNSW PhD student Jarryd Pla, the lead author on the paper, says: “We have been able to isolate, measure and control an electron belonging to a single atom, all using a device that was made in a very similar way to everyday silicon computer chips.”

As Dr Morello notes: “This is the quantum equivalent of typing a number on your keyboard. This has never been done before in silicon, a material that offers the advantage of being well understood scientifically and more easily adopted by industry. Our technology is fundamentally the same as is already being used in countless everyday electronic devices, and that’s a trillion-dollar industry.”

The team’s next goal is to combine pairs of quantum bits to create a two-qubit logic gate – the basic processing unit of a quantum computer.

For a full backgrounder, with high-res images and a detailed Q&A, visit this website.
Video: Animation and video overlay are also available, please contact Brad Hall from UNSWTV, 02 9385 3673