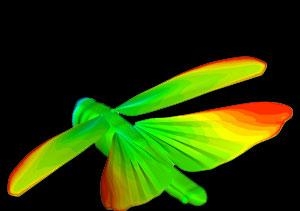 It’s the second year in a row that a researcher from UNSW Canberra has won the award.

Young, an aerospace engineer from the School of Engineering and Information Technology, explores the complex aerodynamics of insects such as dragonflies, bees and locusts, to learn how humans might replicate these abilities in technology.

He began his research about a decade ago, when the idea of MAVs, or small flying robots, was “still science fiction”. Since then, drone technology has been propelled rapidly forward by military and police organisations, with one of the main objectives being miniaturisation: to make palm-sized vehicles or smaller for surveillance and reconnaissance purposes.

But Young also envisions other applications. He says MAVs can replace helicopters for power line inspection, improve search and rescue operations by flying in low-to-the-ground swarms, and can be equipped with “chemical sniffers” to monitor air pollution. He also sees a market in sports broadcasting.

“The Tour de France, for instance, has helicopters getting aerial footage, but if you had a vehicle that was really small and unobtrusive, you could fly in among the peloton and essentially be sitting on someone’s shoulder watching their sweat drip. It could be really exciting,” he says.

“I am motivated by a fascination with the natural world and asking for example, ‘Why do insects and birds fly the way they do, and what it is that makes them so good at it?’

“It is even more rewarding when we can apply this knowledge to improve how we do things in a seemingly unrelated field, such as using aerodynamic technologies to design better wind and water turbines and generate renewable energy.”

The Young Tall Poppy awards, given each year by the Australian Institute of Policy and Science, recognise early career researchers in every state and territory who have achieved significant scientific milestones and communicated their work to the broader community.

“I am very much looking forward to the opportunities that this award will bring in reaching out to a younger audience and hopefully inspire them to take up a career in science or engineering,” Young says.

Research off to a flying start