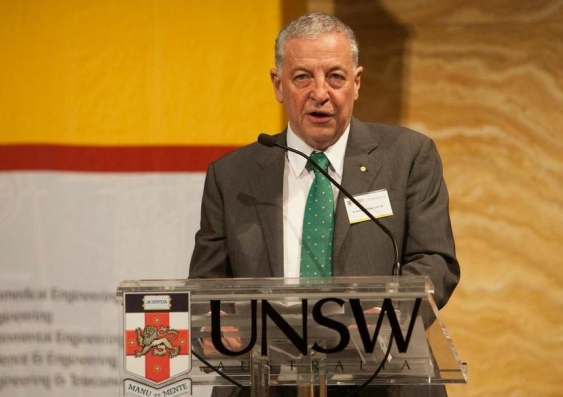 “What we need is the next generation of renewable energies and the current incentives don’t encourage much risk,” said Professor Hill, who introduced the RET in his role as Environment Minister in the Howard government as a way to increase Australia’s supply of renewable energy.

Professor Hill is chair of the Cooperative Research Centre for Low Carbon Living based at UNSW. He congratulated UNSW on its leadership in the area of renewable energy and highlighted the built environment as an area where more can be achieved to reduce carbon emissions.

“The problem is the pace of change is still insufficient given the countervailing influences of population growth and economic growth particularly in the developing world,” he said. “The answer is that we all need to do more. That’s what our CRC for low carbon living is about.”

Professor Hill also argued that Australia should be powering more of its domestic energy requirements with natural gas because it is about half as carbon intensive as coal.

“Government should resolve to see this happen on the east coast and to seek out the policies and measures that will allow it to occur in a cost effective way.”

“At the moment development of the resource is hindered, infrastructure is lacking, and there is insufficient competition in the market,” he said.

The lecture, hosted by UNSW’s Australian Energy Research Institute (AERI), is named in honour of one of Australia’s great engineers, industrialists and philanthropists, Sir William Tyree.

Sir William was passionate about energy research and the need to promote open and honest dialogue about our energy future. He generously donated $1 million towards the construction of the six-star Tyree Energy Technologies Building, the home of energy research at UNSW and pledged a further $10 million.